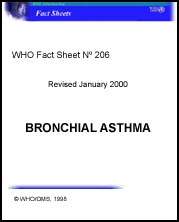 The Scale of the Problem: Between 100 and 150 million people around the globe - roughly the equivalent of the population of the Russian Federation - suffer from asthma and this number is rising. World-wide, deaths from this condition have reached over 180,000 annually.

· Around 8% of the Swiss population suffers from asthma as against only 2% some 25-30 years ago.

· In Germany, there are an estimated 4 million asthmatics.

· In Western Europe as a whole, asthma has doubled in ten years, according to the UCB Institute of Allergy in Belgium.

· There are about 3 million asthmatics in Japan of whom 7% have severe and 30% have moderate asthma.

· In Australia, one child in six under the age of 16 is affected.

Asthma is not just a public health problem for developed countries. In developing countries, however, the incidence of the disease varies greatly.

· India has an estimated 15-20 million asthmatics.

· In the Western Pacific Region of WHO, the incidence varies from over 50% among children in the Caroline Islands to virtually zero in Papua New Guinea.

· In Brazil, Costa Rica, Panama, Peru and Uruguay, prevalence of asthma symptoms in children varies from 20% to 30%.

The Human and Economic Burden: Mortality due to asthma is not comparable in size to the day-to-day effects of the disease. Although largely avoidable, asthma tends to occur in epidemics and affects young people. The human and economic burden associated with this condition is severe. The costs of asthma to society could be reduced to a large extent through concerted international and national action.

· World-wide, the economic costs associated with asthma are estimated to exceed those of TB and HIV/AIDS combined.

· In the United States, for example, annual asthma care costs (direct and indirect) exceed US$6 billion.

· At present Britain spends about US$1.8 billion on health care for asthma and because of days lost through illness.

What is Asthma? Asthma attacks all age groups but often starts in childhood. It is a disease characterized by recurrent attacks of breathlessness and wheezing, which vary in severity and frequency from person to person. In an individual, they may occur from hour to hour and day to day.

This condition is due to inflammation of the air passages in the lungs and affects the sensitivity of the nerve endings in the airways so they become easily irritated. In an attack, the lining of the passages swell causing the airways to narrow and reducing the flow of air in and out of the lungs.

Causes: Asthma cannot be cured, but could be controlled. The strongest risk factors for developing asthma are exposure, especially in infancy, to indoor allergens (such as domestic mites in bedding, carpets and stuffed furniture, cats and cockroaches) and a family history of asthma or allergy. A study in the South Atlantic Island of Tristan da Cunha, where one in three of the 300 inhabitants has asthma, found children with asthmatic parents were much more likely to develop the condition.

Urbanization appears to be correlated with an increase in asthma. The nature of the risk is unclear because studies have not taken into account indoor allergens although these have been identified as significant risk factors.

Experts are struggling to understand why rates world-wide are, on average, rising by 50% every decade. And they are baffled by isolated incidents involving hundreds of people in a city, who suffer from allergies such as hay fever but who had never had asthma, suddenly being struck down by asthma attacks so severe they needed emergency hospital treatment.

· One such incident in London, UK, in June 1994 saw 640 people rushed to emergency departments in the throes of full-blown asthma attacks. A similar incident happened in Melbourne, Australia. Many experts have blamed climatic conditions such as thunderstorms, which break up pollen grains, releasing starch granules that trigger attacks. But they do not know why ordinary hay-fever sufferers developed a life-threatening condition without warning.

Treatment: Because asthma is a chronic condition, it usually requires continuous medical care. Patients with moderate to severe asthma have to take long-term medication daily (for example, anti-inflammatory drugs) to control the underlying inflammation and prevent symptoms and attacks. If symptoms occur, short-term medications (inhaled short-acting beta2-agonists) are used to relieve them.

Medication is not the only way to control asthma. It is also important to avoid asthma triggers - stimuli that irritate and inflame the airways. Each person must learn what triggers he or she should avoid.

Although asthma does not kill on the scale of chronic obstructive pulmonary diseases (COPD), failure to use appropriate drugs or comply with treatment, coupled with an under-recognition of the severity of the problem, can lead to unnecessary deaths, most of which occur outside hospital.

The Way Forward and the Role of the WHO: WHO recognizes asthma as a disease of major public health importance and plays a unique role in the co-ordination of international efforts against the disease. International action is needed to:

· increase public awareness of the disease to make sure patients and health professionals recognize the disease and are aware of the severity of associated problems;

· develop and implement an optimal strategy for its management and prevention (many studies have shown that this will result in the control of asthma in most patients); and

· stimulate research into the causes of asthma to develop new control strategies and treatment techniques.

International Study of Asthma and Allergies in Childhood (ISAAC): WHO collaborates in ISAAC and, more particularly, in the implementation of the study in developing countries with areas of severe air pollution. A preliminary objective is to obtain information on the association between childhood asthma and air pollution. The first results of this study have shown the prevalence of asthma symptoms to vary from 1.6% to 36.8%.

Global Initiative for Asthma (GINA): In 1992, WHO and the US-based National Heart, Lung and Blood Institute jointly formed GINA to cut deaths and disability by developing and implementing an optimal strategy for asthma management and prevention. Since its inception GINA has:

· produced a report covering a range of information detailing all the latest knowledge on causes, the mechanism of the disease, risk factors, management, education and socio-economic factors;

· held workshops to introduce the GINA programme to public health officials and medical professionals in more than 80 countries, leading to implementation of the guidelines;

· been active in disseminating information in 20 languages and bringing together organizations devoted to improving asthma care;

GINA's goal is to build an active network with multiple organizations concerned with asthma to ensure better patient care world-wide.

WHO Initiative on Allergic Rhinitis and its Impact on Asthma (ARIA): WHO is developing a strategy for the prevention of bronchial asthma through the management of allergic rhinitis. The strategy was conceived by specialists from all over the world at a December 1999 meeting on ARIA.

Allergic rhinitis is defined as an allergen-induced inflammation of the membranes lining the nose. Based on the time of exposure to the allergen, allergic rhinitis can be subdivided into perennial, seasonal or occupational disease.

Three statements must be taken into account for the successful prevention of bronchial asthma:

· Among the broad spectrum of allergic diseases, bronchial asthma is the most prevalent, dangerous and life-threatening.

· Underestimated up to now, allergic rhinitis is an important risk factor for asthma.

· One efficient way to prevent bronchial asthma is to control and treat allergic rhinitis from the very beginning of its inception.

The specific goals of ARIA are defined as follows :

· To increase awareness of allergy and allergic diseases as a preventable public health problem among the medical community, public health officials, and the general public;

· To prepare evidence-based guidelines for the prevention and management of allergic rhinitis as a key element of primary prevention of bronchial asthma;

· To educate physicians and other health care professionals about the relevance of allergic rhinitis to bronchial asthma; and

· To educate the public about the potentially fatal risks of allergy (anaphylaxis) and asthma, especially in children, and to encourage greater dialogue with their physicians. Better education and increased dialogue could avoid approximately 25,000 childhood deaths due to asthma each year

All WHO Press Releases, Fact Sheets and Features as well as other information on this subject can be obtained on Internet on the WHO home page http://www.who.int/