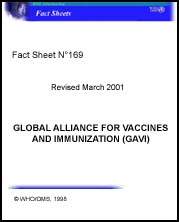 What is the Global Alliance for Vaccines and Immunization (GAVI)?

The Global Alliance for Vaccines and Immunization (GAVI) is an international coalition of partners. It includes national governments, international organizations such as the United Nations Children's Fund (UNICEF), the World Health Organization (WHO) and the World Bank; philanthropic institutions, such as the Bill and Melinda Gates Children's Vaccine Program and the Rockefeller Foundation; the private sector, represented by the International Federation of Pharmaceutical Manufacturers Associations (IFPMA); and research and public health institutions. The Alliance was officially launched in Davos, Switzerland in January 2000.

GAVI is a new alliance created to continue and build upon the work of the earlier Children’s Vaccine Initiative, which had been launched in 1990. Many of the GAVI partners have several decades of experience in immunization, including the work toward eradicating poliomyelitis. In GAVI, the pharmaceutical industry's participation as a full partner is an innovation.

The Global Fund for Children's Vaccines is a financially independent mechanism designed by the GAVI partners to raise new resources for immunization and swiftly channel them to developing country health systems. The Global Fund makes its funding decisions based on the recommendations of the GAVI Board. Since the partners of the Alliance provide direction and support, administrative costs are kept low - approximately 98% of Global Fund resources go directly to countries.

The Global Fund was created with an initial grant of US$ 750 million from the Bill & Melinda Gates Foundation. Since that time, the Governments of the Netherlands, Norway, the United Kingdom and the United States have joined in supporting the Global Fund, pushing its total resources to above US$ 1 billion for 2001-2005. More countries are expected to contribute to the Global Fund and contributions from corporations and foundations will also be pursued.

The Global Fund serves as a new experiment in the field of international public health, allowing for prompt and efficient processing of its resources and reaching out to children who are currently being overlooked in immunization efforts.

The GAVI partners consider immunization to be a key element of public health, a prerequisite to economic and social development and a crucial element in enabling every child to reach his/her full physical and intellectual potential. GAVI members recognized the need to:

· Reverse the decline in vaccination coverage in many countries;

· Increase R&D efforts for vaccines against disease of public health importance in the developing world;

At the country level, governments will collaborate with the Alliance partners through a national Inter-agency Coordinating Committee (ICC), which will explore ways of strengthening immunization services and the financing of those services through national, bilateral and multinational resources.

What is the situation of immunization in the world?

· Since the 1980s, considerable progress in immunization has done much to prevent mortality in young children. Thanks to immunization, and in particular to the Expanded Programme on Immunization (EPI), launched by the World Health Assembly in 1974 (when the immunization rate was 5%), almost 3 million lives have been saved each year, and 750 000 children are saved from disability.

· In 1999, worldwide average vaccination coverage of children under five fell to 74% (it had been at 80% in 1990). One in four children in the world remains without immunization against the six diseases initially covered by EPI (measles, polio, pertussis, diphtheria, tetanus and tuberculosis).

· Access to immunization varies greatly across the world: a child in a developing country is ten times more likely to die of a vaccine-preventable disease than a child from an industrialized one. In some countries, up to 70% of children do not receive the full set of vaccines; the lowest coverage is found in sub-Saharan Africa. In Africa as a whole, over 40% of children are not immunized against measles, a major cause of infant mortality that kills one child every minute. WHO has been recommending vaccination against Hepatitis B since 1993, yet it kills approximately one million people each year. Recommendations have also been made for yellow fever, yet 30 000 deaths occur each year.

· There is a lack of investment in research and development for new vaccines to combat the diseases that are prevalent in developing countries: diarrhoeal diseases, malaria, tuberculosis, pneumonia and HIV/AIDS.

"Nearly two million children worldwide still die needlessly each year of vaccine-preventable illnesses. For only US$ 17 per child, we can provide lifetime protection against the six historical scourges...and for not much more, we can extend the protection to include hepatitis B, yellow fever and Haemophilus influenzae type B," said Dr Gro Harlem Brundtland, Director-General of the World Health Organization, who is holding the Chair of the Board of GAVI for the first two years.

Source: WHO Department of Vaccines and Biologicals

What are the objectives of the Global Alliance for Vaccines and Immunization?

· Expanding the use of all existing safe and cost-effective vaccines.

· Accelerating the development and introduction of new vaccines.

· Accelerating research and development efforts on vaccines and related products specifically needed by developing countries, especially those against HIV/AIDS, malaria and tuberculosis.

· Making immunization coverage an integral part of the design and assessment of international development efforts, including deep debt relief.

Why is vaccine research and development important?

Vaccine research and development, one of the five strategic objectives of GAVI, feeds the pipeline for extending the public health benefits of vaccination to a wider scope of diseases. Moreover, tools and methods are designed to make access to vaccines - existing and new ones - both simpler and safer (e.g. fewer doses, needle-free). WHO has taken up this challenge and created an initiative dealing with WHO’s vaccine research portfolio (Initiative for Vaccine Research: IVR) to consolidate the different vaccine R&D efforts into an integrated Organization-wide activity. On the occasion of the launching of the Initiative for Vaccine Research, Dr Brundtland stated.

"This initiative will allow us to better focus on our disease priorities, such as diarrhoeal diseases, malaria, measles, respiratory infections, HIV and tuberculosis. It will create synergies in application of the new technologies, cost-cutting and opportunities for concerted resource mobilization."

Along the same lines, the IVR will be better prepared to facilitate the mission of the recently created GAVI R&D Task Force.

What are the targets of the Global Alliance for Vaccines and Immunization?

The Alliance has put together some figures to guide its own work at the global level and to help governments in their national immunization programmes.

· By 2002, 80% of developing countries with adequate delivery systems should have introduced hepatitis B vaccine; by 2007 this should have been achieved in all countries.

· By 2005, 80% of developing countries should have systematic immunization coverage of at least 80% in all districts on the basis of diphtheria-tetanus-pertussis (DTP3) and measles vaccines.

· By 2005, 50% of the poorest countries with high disease burdens and adequate delivery systems should have introduced immunization against Haemophilus influenzae type b (Hib), which remains a major cause of pneumonia.

· By 2005, the vaccine efficacy and disease burden in respect of rotavirus and pneumococcal disease should be known for all regions, and a mechanism should have been identified to make the vaccines available for the poorest countries.

How does the Global Fund operate?

All countries with less than US$ 1000 GNP per capita are eligible for support from the Global Fund - 74 countries in all. Global Fund award decisions are based on an application process initiated by government health officials and partner agency staff in countries (e.g. UNICEF, WHO, bilateral development agencies). The proposals are submitted to the GAVI Secretariat and reviewed by an independent panel of experts. The panel’s recommendations are then evaluated by the GAVI Board.

What part does the World Health Organization play in the Alliance?

As the lead organization in global public health, WHO develops global policies and strategies for immunization and vaccine development. The Vaccines and Biologicals Department is the operational arm of WHO in the Alliance. The Department has set a number of priorities for itself, and along with polio eradication and safety of immunization, accelerated vaccine introduction has been chosen as a priority project.

Over a number of years it has become apparent that new vaccines were being developed which could be of tremendous value to the world community, but were unlikely to reach those in greatest need if market forces were left to control their introduction. These vaccines include hepatitis B, Haemophilus influenzae type b (Hib), and most recently, the pneumococcal conjugate vaccines. Several other vaccines that have been available for longer periods (such as rubella and yellow fever vaccines) are underutilized. New vaccines will soon be available for other diseases as well. Creative ways are being sought to overcome the many barriers to the introduction of these vaccines.

Immunization is one of the most cost effective health interventions in existence. If polio is eradicated by 2005, it has been calculated that US$ 1.5 billion per annum will be saved on immunization costs alone. Similarly, it is estimated that the eradication of smallpox in 1979 led to direct savings of US$ 275 million per annum. Immunization reduces the social and financial costs of treating diseases, offering opportunities for poverty reduction and greater social and economic development.

For further information, journalists can contact the Office of the Spokesperson, WHO, Geneva. Telephone: (+41 22) 791 2599; Fax: (+41 22) 791 4858; E-mail: inf@who.int. All WHO Press Releases, Fact Sheets and Features as well as other information on the subject can be obtained on Internet on the WHO homepage: http://www.who.int. For more detailed information, consult GAVI on the web site: www.VaccineAlliance.org or www.VaccineAlliance.org/reference/globalfund