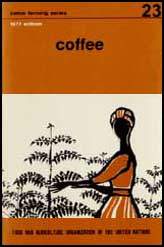 The first twenty- six volumes in FAO's Better Farming Series were based on the Cours d'apprentissage agricole prepared in the Ivory Coast by the Institut atricain de developpement nomique et social for use by extension workers. Later volumes, beginning with No. 27, have been prepared by FAO for use in agricultural development at the farm and family level. The approach has deliberately been a general one, the intention being to constitute basic prototype outlines to be modified or expanded in each area according to local conditions of agriculture.

The coffee tree bears fruit which are called berries.