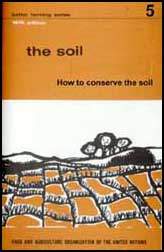 The first 26 volumes in FAO's Better Farming Series were based on the Cours d'apprentissage agricole prepare in Cote d'lvoire by the Institut africain de developpment economique et social for use by extension workers. Later volumes, beginning with No. 27, have been prepared by FAO for use in agricultural development the farm and family level. The approach has deliberate, been a general one, the intention being to create a basic model that can be modified or expanded according tolocal conditions of agriculture.

Many of the booklets deal with specific crops and techniques, while others are intended to give farmers more general information that can help them to understand why they do what they do, so that they will be able to do better.

Adaptations of the series, or individual volumes in it, hay been published in Amharic, Arabic, Bengali, Creole Hindi, Igala, Indonesian, Kiswahili, Malagasy, SiSwati Thai and Turkish. This volume has been prepared by the FAO Animal Production and Health Division (Dr P.L Pugliese).

Requests for permission to issue this manual in other languages and to adapt it according to local climatic and ecological conditions are welcomed. They should be addressed to the Director, Publications Division, Food and Agriculture Organization of the United Nations, Viale delle Terme di Caracalla, 00100 Rome, Italy.

Booklets 27 to 41 in the FAO Better Farming Series were written and illustrated by Tom Laughlin, working closely with the technical divisions concerned.