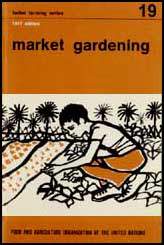 This manual is a translation and adaptation of "La culture mara," published by the Agri- Service- Afrique of the Institut africain pour le dloppement nomique et social (INADES), and forms part of a series. Grateful acknowledgement is made to the publishers for making available this text, which it is hoped will find widespread use at the intermediate level of agricultural education and training in English- speaking countries.