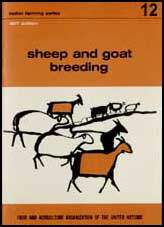 Breeds of sheep and goats

In Africa there are many well- adapted breeds of sheep.

· A BREED OF WOOL SHEEP

These are rather big sheep weighing 30 to 40 kilogrammes.

It is a breed that produces little meat and milk.

These sheep are raised for their coarse wool.

The wool is made into blankets.

Nar variety These are big sheep that produce little meat. They are used for crossing with Astrakhan sheep to produce fur.

Touabir variety These are very big black and white sheep that produce a lot of meat.

This is the commonest breed in west Africa.

These are small black and white sheep that weigh 20 to 25 kilogrammes. They have short legs and are good meat producers.

These are bigger sheep, weighing 40 to 50 kilogrammes, white and brown in colour. They produce a lot of meat and the ewes give a lot of milk.

These have long legs, and can walk a long time in search of grass.

The Targui are good mutton sheep because they produce a great deal of meat.

Attempts are now being made to cross them with European breeds, but foreign sheep adapt very badly.

There are many breeds very well adapted to the climate of their regions.

These are very big goats weighing between 25 and 30 kilogrammes. The buck has very big horns. The she- goats are white with black spots. They can produce two kids in a litter, and produce a lot of meat and milk.

These are small animals weighing 18 to 20 kilogrammes. The body is short and fat. They are brown in colour, with the tip of the tail and of the legs black or white. They are bred for their meat. They are resistant to sleeping sickness in the very wet regions.