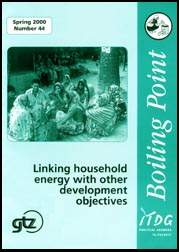 PEER Africa (Pty) started the ECO-housing program in 1995 as a solution to several prevailing environmental and social problems occurring in the South Africa low-cost (mass) housing market sector. The company started the project in a township area called the Community of Kutlwanong.

PEER Africa's 'environmental and energy concerns' are based on the general condition of the environment in South Africa (and other developing countries), which is undergoing major change, particularly in 'black settlement areas'. Much of this concern is due to the need to use biomass as a source of energy by the poor population residing in informal housing, and the homeless. The use of these fuels has resulted in deforestation, hazardous indoor air quality due to high pollutant levels, and major respiratory disease problems among women and children.

There are a number of excellent studies of fuel and energy use in South African black communities done by Universities and research consultants. The works provided excellent background and relevant information for the work being done by PEER Africa.

The South African project also aimed at evaluating wealth creation for poor families by helping to produce practical examples of self-build methods, which lower the cost of construction without lowering the value of the structure. In addition, the passive solar design features, coupled with home owner awareness training, can reduce the monthly operating costs of the household, and free up time and effort normally spent collecting firewood, because less fuel is consumed.

This statement supports many of the findings of from the work of Dr. Flora Mosaka-Wright formally of the Development Bank of South Africa. Dr. Wright studied the role and issues facing rural women and the hardships associated with gathering firewood for household energy use. 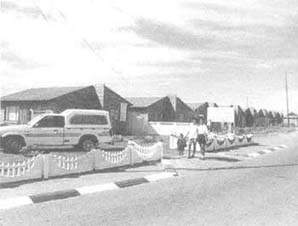 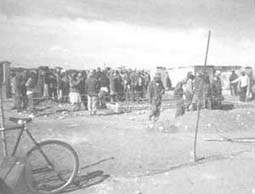 The community already had roads and serviced stands installed by the local municipality when PEER Africa arrived and started the project in 1995; unfortunately most of the layout and design was completed without input from the proposed beneficiaries.

At the request of the beneficiaries and in conjunction with the Kutlwanong Civic Integrated Housing Trust (KCIHT) an integrated housing proposal was designed by PEER Africa to create the best possible 'housing and job creation' environment. The Provincial Housing Board (PHB) is the established government body, which manages all national housing subsidies and projects at the state or provincial level in the country.

There are nine PHBs in South Africa, one for each state or province. The PHB approved the construction of 200 demonstration ECO-Housing units designed by PEER Africa, to be constructed by the community using the Self-Help Peoples Housing Process approach.

The Peoples Housing Process is a formal national housing programme alternative to contractor based housing. In this case, the Government encourages women and local community groups to form an association and to facilitate the construction of their own homes. Lefa Mallane, the formal national coordinator of the South African Peoples Housing Process policy, drove these concepts.

The ECO-Housing project was not started with the goal of addressing the current global climate change issues. Discussions with community leaders failed to find a direct benefit to global greenhouse gas reduction in view of more pressing survival needs (e.g. housing and jobs). PEER Africa worked with community leaders to develop a meaningful linkage between these needs and the importance of greenhouse gas reduction. The result was to focus on the indoor air quality health related issues and the high cost of space heating.

A short field study in Kutlwanong, which detected carbon monoxide in many of the informal dwellings, helped to make the issue of greenhouse gas/air pollution more personal to the local people. This 'local linkage' served as a catalyst for future discussions and programmes to help reduce the causes of pollution in poor households. PEER Africa and KCIHT adopted the concept that a decent home must also be a healthy home, and indoor air quality became a key component or requirement in the ECO-home project.

This concept was in contrast to the national housing policy at the time, which was understandably focused on restructuring the housing administration to address the need to deliver basic shelters to hundreds of thousands of homeless families.

In December 1999, the Government announced a number of environmentally friendly housing standards that were to be 'considered' by contractors and developers of lower cost units. Prior to this, there was really no major enforcement of quality standards for houses constructed in poor communities.

Fortunately, the current housing National Housing Minister recognizes the importance of housing standards and has been the key to improvements and innovations in housing policy.

Although global climate-change-related research started as a secondary mission to this project, it creates the need to develop a monitoring and certification process for standards and guidelines. Importantly, this process must become an integral component of the Sustainable Economic Development (SED) plan of the local community. There were no funds available from the government-housing subsidy for either energy-efficient and environmentally-friendly housing design research or to address greenhouse gas monitoring. As a result, PEER Africa and the KCIHT wrote several proposals to international groups, some of which were in conjunction with the International Institute for Energy Consumption (IIEC) South Africa.

The project was initially funded by Dr. Abron and Douglas Guy, and later received a grant from the US Department of Energy and was supported by USAID South Africa for the past two years. IIEC South Africa also provided funding for capacity building via several healthy home initiatives in the local community, which used the Kutlwanong model as the basis of a broader scale awareness and support programme.

The funding obtained from donors creates the opportunity to develop technical and socio-economic data which can be used to compare the performance of the ECO-House building-family unit and behaviour of the non-ECO-House family units. The results of this comparison (reduction in operating costs and greenhouse gas reduction) can be a catalyst to changing local and provincial government policy relating to community development and design requirements. The benefit to the local community of Kutlwanong is the development of a research and testing environment that can provide jobs for local residents (e.g. surveying, tending to monitoring equipment etc.).

It is very important to explain the purpose of the monitoring programme in terms that are relevant to the local community and development stakeholders from the local region.

The research is important because there is a lack of quality field information that compares energy use and related family behaviour in shanties (informal structures), new government housing for the poor, and the proposed PEER Africa ECO-Housing option. Monitoring in poor communities must be performed to validate claims of cost saving and improvements in air quality.

The method of evaluation is the critical point here. Housing is a very personal experience for most poor people and research must be carried out sensitively. Performance monitoring requires the researcher to observe the family and unquestionably has an effect on the behaviour of the householders. The researcher must figure out a way to integrate the research with the real needs of the family and the community. In fact, the community must be part of the programme from design to post-project maintenance and reporting.

The community respondents were appreciative that staff members visited their homes to find out how the new homes were performing and to obtain their feedback.

Preliminary results suggest that the respondents wanted the opportunity to express their comments about community development in general as well as about their own particular houses. Some expressed their desire for other communities to learn from their successes and mistakes. Greenhouse gas mitigation was not really one of the reasons for their input or concern. 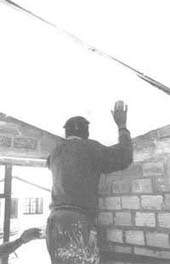 Figure 3: Insulation being installed by a trained worker to reduce energy needs

There were a number of very important design features that came from the residents themselves. During the design process a number of options were considered, including the amount of insulation in the walls and ceilings, the thickness of the building envelope, and the mass inside the houses.

While the homes were built on the principle of passive solar design, the actual construction did not completely adhere to the design specifications that would provide the greatest possible thermal performance. This was primarily because of the all important aspect of homeowner preference, and also because of the poorly designed street and site layout inherited from local municipality city planners. For example, some homeowners did not want their large windows to face the toilets at the back of the site. Also, the orientation of the site with the street prevented the homes, in some cases, from having the proper orientation with respect to the sunlight.

A major thrust of the current work is to understand how the house-family unit performs in reality (with real families living inside), and to compare that data with model predictions.

Based on this analysis, it is hoped that a method will be developed that will determine the strengths and limitations of the computer modelling tool. This will enable other developers to continue to design these affordable Eco-Homes with less costs being passed on to the beneficiary. An added benefit is that researchers may be able to determine the potential greenhouse gas reductions that could be achieved if this type of construction is used extensively.

Lilia A. Abron, Ph.D., P.E. is the owner of America's oldest continually owned and operated female and black owned environmental and sanitary engineering firm. She has been instrumental in the development of environmentally sound development focused on improving the health and safety conditions of the human family. She is very active in the global climate change arena is currently working on a number AIJ proposals and projects in Africa.

Douglas Guy is the cofounder of PEER Africa and had been involved in African studies and development for more than 20 years. He is the operations manager of PEER Africa and oversees all infield projects on the continent. The two are actively seeking investors to participate in the roll-out of a PEER Africa product line of Energy-cost optimized houses, fixtures and appliances. The two have for the past five years focused in Southern Africa and have also developed a unique ECO-Home bridging finance plan to help promote best practice demonstration projects in the region.