A solar lantern has been developed for use in rural Kenyan homes using sunlight to charge a battery during the day, which then powers a lamp after dark. This project has been developed by IT Consultants, together with project partners International Development Enterprises, in Kenya. Using a combination of highly technical production methods and participatory market surveys, IT Consultants hope to come up with a product that is tailor-made for Kenyan customers.

In order to develop the lantern effectively, the project team decided to carry out market research in two stages:

· The first stage (already complete) set out to determine which aspects of existing solar lantern designs were favourable to potential customers.

· The second stage will use working prototypes (designed with the results of the first survey clearly in mind) to gauge customers' reactions to the new design.

Market research, which is being carried out in several countries in the South is geared towards peoples' lifestyles and cultural backgrounds. Bearing this in mind, a number of studies have been carried out in Kenya by project partners Energy Alternatives Africa, which have attempted to identify which aspects of existing solar lantern designs are favoured by potential customers.

During the lantern survey, focus groups were used to measure reactions to particular design details. The ideas generated by these focus groups were recorded on paper and were also used to stimulate more general discussions where participants could air their viewpoints, and which often contained interesting and unexpected information.

· Survey groups yielded more accurate results when they were not dominated by a few knowledgeable individuals. Under these circumstances, everyone felt comfortable about having their say.

· The location and time of day for group surveys was important. Holding a survey after dark might at first seem to be the best way of demonstrating lanterns and their important characteristics to customers. In practice the team found that in rural areas with no street lighting, finding participants (women in particular) who were willing to travel from home at that time was more difficult!

· The team discovered that although participants drawn from slightly higher income groups are easier to access and interview, their spending patterns can differ from those of customers from the lower income households at whom the new products might be targetted.

· It is often difficult to collect accurate information about how much a customer is willing to pay for a new product, especially in communities where bargaining is part of everyday business. The question 'how much would you pay?' when asked directly is more likely to lead to bargaining rather than to yield any useful information! Asking instead how much the participants friend or relative might pay helps to depersonalize the question and avoids a temptation to haggle. 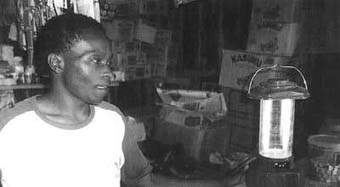 Figure 1: A solar lantern in use

As a result of the initial focus group study the project team were able to come up with a concise description of the 'ideal lantern'. The most important features were identified were as follows:

· customers should have access to affordable and readily available spares

· customers expect an overall lifetime of the lantern of 6 years

· customers expect a 12 months warranty for the product

· the lantern should give a 360 degree spread of light

· the carry handle should be sturdy and comfortable

· the preferred choice of bulb was (5w cfl type)

· the lamp should be portable and weigh no more than 2.5 kg

· the lantern should be stable with a good base

Extra features for which potential customers expressed a need were:

· an indicator to show that lamp is charging

· a power socket to allow a small radio to be connected to the unit.

The findings of this initial survey were used to produce a design, and as a result, the team have produced a new design for an injection moulded lamp which incorporates all of these features.

It is vital during the development of any new product to show customers a sample and to listen to their ideas about it. This is especially important if producing large quantities involves a lot of money to set up tooling and machinery. Until a few years ago designers could only produce 'block models' of new products of this type. These were constructed by hand from wood and plastic, and although they had the appearance of the final product they could not normally demonstrate how the new product would work. Today, computer-aided design (CAD), combined with rapid prototyping techniques and soft-tooling allows the designer to make a single copy of their new design in a matter of hours. This technique allows the designer to find out very quickly how his design will work, and more importantly, allows potential customers to give their opinions, all before any significant costs have been incurred.

In developing the solar lantern, the project team have been able to use facilities at Coventry University, UK, to produce a rapid prototype of the new lantern. This will in turn be used to produce a small batch of sample lanterns that will be tested in sample households in Kenya. This phase of research, used to measure customers' reactions to the new lantern design, has been designed by IT Consultants' project partners International Development Enterprises, working closely with ITDG staff in Kenya. Fully working test lanterns will be distributed to sample households where they will be used for a period of one week. Project researchers will then visit households and use a simple questionnaire to measure customers reactions.

If all goes well and the sample households feel positive about the lanterns, the next stage will be to pay for someone to make the tools for the injection-moulded components. It is likely that these will be produced in UK and then shipped to Kenya where the moulding and assembly of the lanterns will be carried out by locally appointed companies.

The ultimate success of any new product can be measured through sales figures. The first estimates show a potential market for over one million units in Kenya alone, if cost can be kept low. IT Consultants expect to use the experience gained in Kenya to assess the size of the demand for solar lanterns in other countries of the South. It will also be assessing the success of the international technological collaboration between IT Consultants in the UK and International Development Enterprises in Kenya.