Throughout East Africa, old car batteries find a second home as a source of electric power for those living off the grid. Radios and small black & white television sets are the most common appliances powered by the battery, though some domestic electric lighting competes with the more popular kerosene lamp.

Batteries typically last ten days to two weeks in between charges, and it can cost as much as US$ 1.50 to be recharged by a village-based entrepreneur operating a charging station off the national grid. This regular top-up can entail a trek of many kilometres over rugged countryside, often carrying the heavy battery by bicycle or even balanced on a person's head. Some of the roughest and most inaccessible terrain is in mountainous regions, where plentiful sources of water are available which can be tapped to drive this simple battery charger.

A Chinese-made bicycle headlamp generator, of a type widely available throughout Africa, has an output of 12 Volts and 5.5 watts. It struck me that this was just under one amp, which was sufficient to trickle charge a car battery to full power over a ten to twelve hour period.

Upon testing the brush-less 'generator' against the rotating tyre of my bicycle, I found that it produced an alternating current. A diode bridge was required to rectify the current to direct current in order to charge a car battery (Figure 1). Soldering four diodes together in the right direction is simple enough and works well, though at the expense of about 0.6 of a volt due to resistance within the diode; this can be compensated by increasing the speed of the waterwheel slightly.

An old, well-used bicycle was purchased from a willing vendor and the two wheels, complete with threadbare tyres, were mounted on a shared axle separated by six inches. The axle and wheels are supported by a simple double A-frame, with a two foot pipe extending up from one side acting as a mount for the generator which runs (as it should) on the side-wall of the tyre (not the rim). The frame is made of welded scrap angle iron (Figure 2) 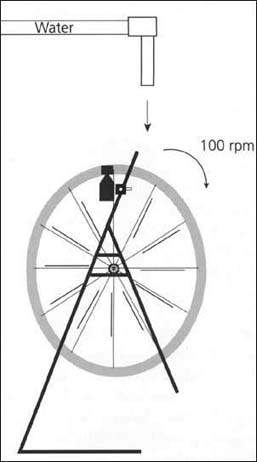 The 16 paddles are made of thin galvanized iron salvaged from old roofing sheets. They are cut to bridge the gap between the two bicycle wheels, which are parallel and six inches (15 cm) apart at their hubs, and are simply folded over spokes on each wheel. If you can visualize a bicycle wheel's spoke arrangement, you will know that each spoke crosses another at about midpoint, forming an 'X'. The paddles are folded along a single spoke on either side of this cross-spoke which acts to centralize the paddles- preventing movement towards either the rim or the hub. Each paddle is eight inches (20 cm) long and extends to within four inches (10 cm) of the 21 inch (52 cm) diameter bicycle rim (Figure 3).

A stream of water from a two-inch pipe placed three to four feet above the paddlewheel serves to drive the unit. The paddlewheel must rotate at close to 100 rpm in order to spin the generator on the side wall of one tyre with enough speed to generate 13.5 volts. The battery is simply connected to the appropriate terminals and left to charge. A voltmeter or a hygrometer can be used to measure the state of charge of the battery.

An in-line voltmeter (optional) is mounted in the lid of a wooden box designed to hold the battery being charged. Large alligator clips connect the charging wires to the battery. The wiring is illustrated in Figure 4.

At time of writing, the water-wheel generator has been used on an almost daily basis for six months without a problem. It can be left unattended for the 8 to 10 hours charging period, and has not yet required maintenance.