In rural India, the domestic sector accounts for nearly 75% of the total energy consumed; with cooking accounting for almost 90% of household energy use. Annually, the present level of consumption of fuelwood is around 200 million tonnes (Sinha C. S. et. al.), whilst it is estimated that the annual sustainable yield of fuelwood is only about 86 million tonnes. Thus, a wide gap exists between demand and sustainable supply. At the same time, traditional stoves have serious effects on the environment and lead to high levels of indoor air pollution, which affect the health of women and children.

This paper deals with the strategies adopted in the Solan district of Himachal Pradesh for introducing an improved mud cooking stove, which has an embedded water tank. The altitude of Himachal Pradesh rises from 900m, its most prominent landmark is the perennial white snow-line on various peaks. The winters are quite severe with temperature sometimes dropping to -400C in the cold desert zone of Lahaul and Spiti districts. Thus, water and space heating are major requirements, apart from cooking (Aggarwal R, Chandel S S, 1997). The most commonly used stoves are traditional wood-burning mud stoves with efficiencies ranging from 8% to 10%. The common fuel species are pinus roxburghii, and Banj (Quercus), as well as a few other less common shrubs.

The traditional cooking stove was modified to meet the need for hot water expressed by the local community.

Initial results were obtained from a water-heating tank attached to a stove, which had been developed by a local housewife. An inbuilt water tank was -placed at the bottom of the firebox with connections to the bathroom. This design was modified to develop the TERI model of improved stove for the village. The new model was installed in a test household and monitored for one month. The design was modified several times after discussions with the households. The shape and design of the kitchen, and user preferences were considered, so that the stove design could be modified slightly to suit individual households.

Important factors in this project were:

· the involvement of the test household in the project

· their willingness to cope with repeated instructions and construction

The next step was to install the stove in five sample households, who were enthusiastic to adopt the system and were willing to pay for it. Further performance tests were carried out during this phase. Again, the willingness of households to adopt a test technology was important in this demonstration and dissemination phase.

Two days were spent in making and installing the stove in each of the five households. During this time, household members were given detailed information on how the stove worked. A second visit was made after 4-5 days to show households how to use the stove. Ten to twenty days after installation, tests were carried out using improved and traditional models to compare fuel consumption and cooking time (tests were repeated); results showed that households saved both fuel (Figure 2) and cooking time (Figure 3); on average, about 45%. At the same time, users were asked what they thought about the improved model compared to their traditional stoves.

The improved stove models installed in the five households were used to demonstrate the technology to the local communities, and to provide data for technical performance assessment. To convince the village community about the benefits of the technology, the Mahila Mandal was asked to disseminate information as it was believed to have closer contact and more credibility with the community. (The Mahila Mandal is a social group, organized by women at village level for various social, economic and religious activities.)

At the same time, awareness programmes for village women were created dealing with: fuel-wood consumption; over-exploitation of resources, deforestation, health hazards from indoor pollution, and the benefits of improved cooking stove technology.

The test results from the performance surveys of the improved cooking stoves were shared with communities in neighbouring villages, who were invited to see the installed models themselves. The objective was to promote the technology in several villages and create a wider demand for the devices. 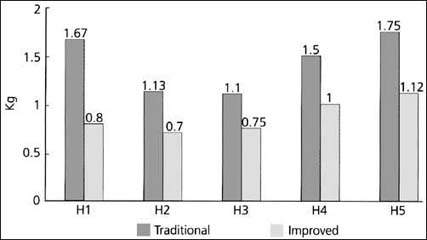 The dissemination strategy used in this project was successful because of the approach it adopted. Demand for the stove was generated by successive rounds of demonstration. After the first test model was installed, households in the village were approached, and a ranked list was prepared of volunteer households who wanted to adopt the stove in the first phase. Demonstrations of these stoves generated acceptance in surrounding households, who were able to see the stoves working before they made their decision.

Test results were shared with neighbouring villages, and Mahila Mandal groups were engaged to inform villagers of the benefits. Awareness programmes were held to promote the technology in terms of environmental and health benefits. 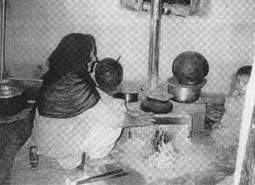 Figure 4 Improved stove in use

Assessing the demand for stoves

A demand assessment survey was conducted in several villages. The residents of nearby villages could visit the households and inspect the stoves for themselves and talk to the test households before making up their minds. About 20 households adopted the technology at this stage. When more stoves were installed, additional demand was generated.

Another aspect of acceptance was the flexibility of the improved cooking stove. Households could have extra features installed or the system modified according to their choice if they were willing to pay the additional cost.

In all 86 rural families from the 15 small villages benefited, improving their kitchens by giving them efficient and user-friendly cooking and water-heating devices. The most visible benefit was the availability of hot water without making extra work, and there were other gains, including fuel and time saved, and reduced smoke emissions during the cooking. The technology was well received, leading to demand from other households. It was noticed that households using the improved stove benefited by having more free time and being less tired. This has a direct impact on the time and care they can devote to their children, and the quality of their kitchen environment. It is also expected to provide an annual saving of 260 tonnes of biomass in the region.

The project has now ended and the programme has been handed on to a local NGO. Stoves are now being installed by local entrepreneurs, who have found that the design is well-accepted and considered desirable by the local community. Consequently, no further modifications are planned for the stove, although increasing its overall efficiency might be possible. It is currently priced at Rs 500-600 (Rs70 = £1UK) depending on the amount of pipe-work required, and compares favourably with the cost of an equivalent metal stove. 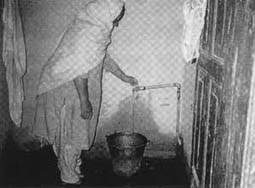