Commercialization of the Sewa Stove in Mali

Following our article in BP41 entitled 'The household energy market in urban Mali', we received this information on the commercialization of the Sewa stove in which the authors clarify the position of their organization regarding subsidies and commercialization.

ATI/Mali trains local, private entrepreneurs in the production of the Sewa stove, a modified stove design based on the Kenyan Jiko, and these entrepreneurs make and sell them on a commercial, profit-making basis. ATI/Mali provides support in the form of initial production research and tooling, training and quality control, and marketing campaigns (Figure 1). Through the latter, consumers are informed of the product's existence and performance and are then free to decide whether or not to contact a retailer or producer to purchase a Sewa stove. When they do, they pay the true retail cost, without price subsidies. ATI/Mali does not fix prices, pay a salary to producers, or pay consumers to purchase stoves.

The market determines which stoves are manufactured and sold

Except for small orders of promotional or test stoves, ATI/Mali does not contract for stove production or directly disseminate stoves. The entrepreneurs trained by ATI/Mali use their own working capital and sell directly to retailers and consumers; if they wish, they may, at the same time, produce competing stove models. Successful entrepreneurs make what they can sell at a profit. The artisans in question cite two principal reasons for producing the Sewa stove

· because there is no price set by ATI/Mali for their stoves, the price they charge depends on what the market will permit, and

The Sewa stove is adapted to local conditions

Some important changes were made in the Sewa (Diambar in Senegal) before commercial production began in April 1997. The diameters of the four sizes of stoves promoted by ATI/Mali were specifically adapted to work with the pot sizes and larger household sizes found in Mali (Figure 2). The pot rests were bent slightly to increase the stove's efficiency with the rounded bottom of Malian pots. It was necessary to substitute wood ash for the vermiculite in the cement lining, since this was unavailable locally. The height was increased from 26.5 cm to 29.5 cm in response to consumer comments. Small, metal hinges to hold the liner in place were added as well as curved handles to make the stove easier to carry. Production improvements were also made to reduce costs and improve quality. The Sewa does not require any changes in the cooking methods used in Mali or the use of special types or sizes of pots unlike improved stove designs that require placement of the pot inside a metal chamber. The ceramic liner has particular benefits in preparing Malian cuisine, which is simmered for long periods.

Contrary to the belief that a ceramic-lined stove could not be produced and marketed in Mali, this stove has proved a success. As for removing the subsidy, there never was one. ATI/Mali feels that subsidies should not be an integral part of any project. Price subsidies artificially inflate demand for stoves and put the sustainability of any programme in doubt.

Efficiency of the Sewa stove

Boiling tests commissioned independently in May 1996 at the Centre National de L'Energie Solaire et des Energies Renouvelables (CNESOLER), a Malian government laboratory, showed virtually no efficiency difference between Jiko-type stoves imported from ATI/Senegal and the Nafacaman, a popular model promoted by SED. When CNESOLER ranked the top five stoves, there was little performance difference between the Jiko and the Nafacaman in terms of percentage output efficiency (28.97% vs. 28.11%); speed in bringing water to a boil (39.2 minutes vs. 37.8 minutes); and power (3.975 Kw vs. 4.276 Kw). 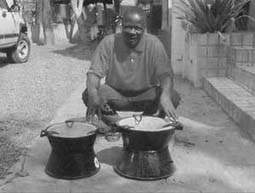 Further, the principal advantage of a ceramic liner is that it retains heat and thus reduces consumption at the end or simmering phase of cooking and this advantage is not measured by boiling tests. Cooking tests, where a typical Malian meal is prepared and the charcoal consumption of the different stove models is measured, more closely approximate actual conditions of stove use and give a truer measure of stove performance. In January 1999, ATI/Mali commissioned comparative cooking tests by CNESOLER; the high efficiency of the Sewa stove can be seen in the bar chart (Figure 3). 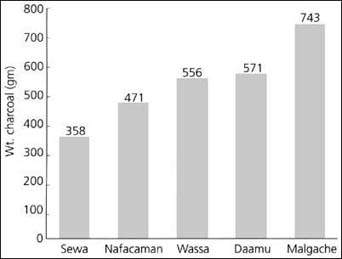 In February and March 1999, ATI/Mali undertook a study in 130 Malian households to further confirm the Sewa's performance relative to other models under real use conditions. Measurements of actual charcoal consumption under real cooking conditions were taken over a three-week period for the Malagache, Nafacaman, and Sewa stoves. Survey work was completed on March l4th 1999, and although final data on relative consumption rates among the various stove models are not yet available, preliminary indications are that the final results will be similar to those presented above. At the end of the survey, of the 99 households which were offered the choice of keeping one of the test stoves; 65% chose to keep the Sewa, most people citing its greater efficiency as the primary reason for their preference.

Competition benefits consumers and the environment

For ATI/Mali, in the end it is the Malian consumer and environment that benefit from competition and a wider range of improved stove technologies on the commercial market. Over 8,200 Sewa stoves have been sold in Bamako since April 1997. In Senegal, over 50,000 ceramic-lined Diambar stoves have been sold since late 1991. Although this is a small number as compared to Dr. Massing's goal of 100,000 stoves (see BP41, p. 11), it represents true, unsubsidized, sustain-able stove distribution. Although the Sewa stove is more expensive, it has captured a growing share of the Bamako market following the launch of an aggressive television advertising campaign and the reduction of subsidies for the other stoves. This leads ATI/Mali to believe that stove sales continue to be limited by demand, and not by the supply and price of scrap metal.