Environmental implications of the energy ladder in rural India

The rural population in India depends on traditional biomass fuels (wood, animal dung and crop residues) for meeting their energy needs. Though nationally there has been a decrease in the share of traditional fuels, as biomass is being increasingly substituted by commercial fuels, the shift to commercial fuels has been negligible in rural areas. In these areas, the monthly consumption of fuelwood has increased per person from 16.24 kg in 1987-88 to 17.27 kg in 1993-94 (NSSO 1997).

Energy consumption in rural areas is determined by: the availability and accessibility of local biomass resources; the competing uses for biomass; availability of commercial energy sources; the cost of commercial fuels such as LPG and kerosene (NCAER 1985); absence of an effective supply especially in the rural areas (TERI 1998); and inadequate production and refining capacity of LPG (Ravindranath and Ramakrishna 1997).

One reason is the range of policies on supply and pricing of commercial fuels, which discriminates between urban and rural areas. The Government of India gives a subsidy on kerosene and LPG, which mainly benefits the urban population, where these fuels are easily available. The price paid by the consumer for kerosene is 69% of the production and supply cost, for LPG it is 61% and for electricity it is 48% (TERI 1992). For commercial fuels, the supply and distribution, as well as the prices, are regulated by government agencies. Kerosene is supplied through the Public Distribution System (PDS) - a network of fair price government shops. On the other hand, fuel-wood is neither subsidized nor is its distribution and supply controlled by the government. As a result, rural consumers often end up paying much more than the controlled rates fixed by the government (TERI 1996, Sharma and Bhatia 1986).

Biomass resources are at present being over-exploited. There is evidence that where the land is already degraded, fuelwood extraction can make things worse (TERI 1996). Deforestation and burning of biomass significantly contribute to greenhouse gas emissions. In India it is estimated that of the 68.3 million tonnes of carbon released annually due to biomass burning, fuelwood accounts for 82.3% (Kaul 1993). In addition to carbon dioxide emissions, wood burning also creates the products of incomplete combustion (PICs) which have a global warming potential as great as carbon dioxide itself (Smith 1992).

Using agricultural residues and dung as energy sources instead of using them as fertilizers can reduce the soil nutrient level. Out of the total nitrogen content of dung production of 1.35 million tonnes annually, 0.4 million tonnes is lost through the burning of dung as fuel (Ravindranath and Hall 1995). This can have economic implications for local communities as they are forced to buy food if their food requirements are not met from the household plots, due to decrease in productivity of the land (Agarwal et al 1997). Over 136 million tonnes of crop residues are burnt as a fuel in the domestic sector (TIFAC 1992). This results in a significant loss of nutrients to the soil. The water retention of the soil is also reduced increasing the need for irrigation. Crop residues not only maintain the organic content and humus of the soil, but also provide surface protection. Thus a reduction in crop residues makes the soil vulnerable to erosion and drought.

At the local level, receding forests add to the drudgery of women who have to travel longer distances in search of fuel or, in extreme situations, are forced to switch to inferior fuels such as roots, weeds, leaves, etc. An estimated 84% of rural women aged 10-59 years are affected by fuel-wood scarcity in India (UN 1995). Inefficient combustion of biofuels in traditional cookstoves produces smoke which can cause a variety of health problems such as conjunctivitis, acute respiratory infections, upper respiratory irritation, etc. (Batliwala 1995).

The Government of India has launched a number of household energy programmes to check deforestation, provide a clean and cheap source of energy, improve soil quality, reduce indoor air pollution, and reduce the drudgery of women, especially in rural areas. Among these, the National Project on Biogas Development (NPBD) is the largest investment programme and the National Program on Improved Chulhas (NPIC) has disseminated the largest number of stoves (Figure 2). The programmes were launched in the early 1980s and so far about 2.7 million family size biogas plants (capacity of 2cu.m) and 28 million improved cookstoves have been installed in the country (MNES 1998). Wherever the programmes have been successful, local people have benefited from savings in fuel and time, reduced smoke levels, health improvements, cleanliness and hygiene, etc.

In areas where fuelwood is scarce and commercial fuels unavailable, technologies have made a significant impact on the local biomass resource base. In the western Ghat (hilly) region of Karnatka in south India an annual saving of 588 tonnes of wood was achieved from the 2000 stoves installed, making a significant impact on local biomass resources (Ravindranath and Hall 1995).

Biogas has reduced the dependence of local communities on protected areas for meeting their fuelwood requirements. In the village of Dedikayal, in Junagadh district of Gujarat, a successful biogas programme has reduced the annual inflow of 300 cartloads of wood from the forests to 15-20 cartloads (Dutta et al 1997).

The use of biogas slurry as organic manure can lead to substantial improvements in soil quality. At the national level, the plants are estimated to be generating about 41 million tonnes of enriched organic manure per annum (MNES 1998). The loss of nitrogen in aerobic decomposition from conventional composting is avoided for the 10 million tonnes of dung used in biogas plants (Ravindranath and Hall 1995). In village of Pingot in Gujarat, the use of wet biogas slurry reduced the weed intensity, and the crop yield was further increased by using a mixture of chemical fertilizer and slurry compost (TERI 1995).

Reductions in smoke, and in the incidence of eye and lung diseases are perceived as major benefits by over 35% of the total chulha (stove) owners in the country (NCAER 1993). Likewise, in an assessment of impact of biogas, 38% of women felt that its use has reduced the level of smoke, and contributed towards cleaner and more comfortable kitchens (Dutta et al 1997). 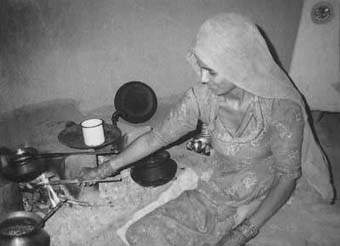 Studies show that in households using biogas for cooking (Figure 3), the time spent by women in cooking, making cow dung cakes, collecting fuelwood and washing blackened utensils has come down, giving them more time to attend to their childrens' needs (Bilgi 1997). Economic benefits in terms of reduction of labour input, diversion of female labour to productive activities, fuel purchased, etc. have also been reported (Mittal 1997, Ravindranth and Hall 1995).

The transition to commercial fuels is difficult because of a weak distribution system, inequities in distribution and high costs, especially when traditional fuels are available at zero cost. There is a need to strengthen the Public Distribution System to prevent pilferage and diversion of kerosene for other uses. However, the household sector must compete with other sectors for commercial fuels, and given the large import bill that the country pays for petroleum products, the rural sector is unlikely to be given preference (TERI 1996).

As biomass becomes increasing scarce and the environmental effects become more obvious, people will have to start paying for it in rural areas (Leach 1992). This may well increase the demand for commercial fuels, leading to in improvements in the distribution network. National level surveys have indicated that people will move to commercial fuels as they become more wealthy (NSSO 1997). On the other hand, some case studies have found that as household income goes up, the quantity of biofuels used also increases (Singh 1993). Household energy technologies such as improved chulhas and biogas need to be promoted more strongly to ensure a sustainable use of the local resources and an improved quality of life for the rural people. 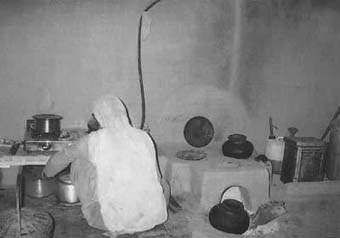 Figure 3: Biogas stove and improved stove being used in the same kitchen