Electricity for the Urban Poor 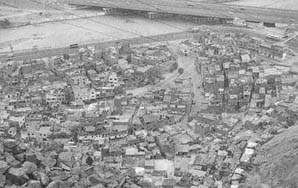 The main reason for people being without electricity in rural and urban areas is rooted in the same problem; simply stated, they are poor. Broadly speaking, in India, 75% or more villages are electrified, but only 30% or less of rural homes have electric lights. As a rule every urban area is electrified, but roughly speaking about 30% of homes, primarily the so-called slum dwellings, have no electric lights. In urban areas one is reminded of the lament of the poet Coleridge’s Ancient Mariner: ‘Water, water everywhere, but not a drop to drink.’

Kerosene, sold in small amounts is, in some ways, is a blessing in disguise. If people do not buy, they will not have light. With electrification, there is really a problem of collection of bills from electricity customers; cutting electricity for the individual defaulter is tricky. It can be done, but the cost of doing it may well be higher than what the individual family owes

But we will look at the problem from another angle. It does not require much fancy calculation to establish that the electricity is cheaper than kerosene per lumen of light apart from its comfort and cleanliness. Yet people have not opted for electric lights. The big question is: WHY?

Theoretically the principal constraint pertains to the initial cost. However, there are several contributory factors.

The first group pertains to the question of safety

· For grid electricity, it is required for one to use ‘licensed’ electrical contractors to draw the lines from the mains to the house. There is no possibility of using the ‘informal sector’ as one is accustomed to for buying kerosene lamps.

· Further, housing is required to meet some standards. Slum dwellings rarely meet these (Figure 1). In fact, those living there are labelled ‘illegal’ squatters.

· Solar Home Systems, using solar photovoltaics, at current costs, are seen to be a viable option for only isolated communities. It is seldom the case that urban slums will qualify on that basis.

· Biomass-based systems are not feasible due to the lack of an available resource.

· Electricity cannot be bought as one does with kerosene from the proverbial street-corner shop. There is a gigantic bureaucracy of the utility company to be dealt with.

· Metering electricity for a small consumer with a connected load of the order of 100 watts or less is prohibitively expensive.

· Conventional methods of billing and collection of tariffs simply makes the cost higher.

This has to do with the utilities themselves. They are under great pressure in almost every developing country to do without government handouts. This is exacerbated by an enormous scarcity of electricity generation capacity leading to power shedding and rationing. Expansion of capacity can occur only through investment by international sources - either private or agencies such as World Bank - that need to be assured of adequate rates of return. Under these conditions it is hard to expect the utilities to invest either effort or cash to assist the poor and needy.

Possible ways to get around the constraints

The key to progress lies in the slum dwellers forming an association - for lack of a better name, let us call it a small utility company. This brings us to that famous catch-phrase, that is so popular in development discussions, institution building.

One can visualize a series of tasks for our utility company.

· It will have to negotiate with the utility company to set up a transformer station with a meter and will pay for the electricity used by the households in the area.

· It will negotiate with the licensed electrical contractor to lay the necessary lines from the substation to a group of houses as would happen in a high-rise apartment complex. Such an approach can lead to some cost reductions.

· It will need to investigate technology modifications - for example use of moulded plastic wiring - to fulfil the building codes but yet meeting safety requirements. This can also lead to cost reductions.

· It will have to bill and collect the tariffs from the users.

The last item is going to prove the most complex since it will determine the sustainability of our utility company. Over the years there has been enormous work done on the costing involving capital, operation and maintenance, metering, billing and collection of tariffs. We will not go into details of these things but satisfy ourselves with presenting various cost elements.

The capital costs of our utility company are:

1. Setting up the sub-station;

3. Connection to the houses including light fixtures and lamps. The latter should obviously be the compact fluorescent variety.

There will be the inevitable maintenance costs both at the sub-station level and the consumer level - for example replacement of lamps (hopefully these need be only once in a couple of years or less).

Finally there will be the utility charges.

All these costs have to be recovered from the users in the long run through a ‘billing and collection’ system. Since metering is not an option, current limiters as described by Nafziger (1996) could be a useful approach. The amount of money to be collected is simply determined by the size of the current limiter.

The fundamental assumption here is that some outside institution/ agency is interested in providing electric lights to these slum dwellers. How should it start?

In the case of electrification, the interested institution has to be armed with the money or a clear assurance of it (from one source or another) when needed, before initiating a discussion with representatives of slum dwellers. A question of consequence is the financial participation of the slum dwellers in the utility company. The approach in this context would be to raise the issue of the money saved on kerosene during the discussions.

A profile of the slum needs to be drawn up. Size of the slum determines the size of the sub-station. A slum of 1000 households will obviously use enough electricity to be worthwhile for the utility but will demand greater skill from the utility company in tariff collection from its customers. A tale from rural India shows the possibilities for dealing with its customers. Rice transplantation in India is invariably carried out by women. A leader of the women negotiates with the landowner the wages involved. On completion, the terms and conditions of work are presented to the entire group. Once these are accepted the work is begun and completed in time (Reddy 1990). The point here is that one can make use of the leadership qualities among the poor. One idea could be to borrow the practice of Grameen Bank in Bangladesh by creating the equivalent of so-called ‘lending circles’ comprising of five or so households to achieve the disciplined payment of electricity charges.

One more level of participation from slum dwellers could be envisaged. Presumably there will be electrical contractors who are enlightened enough to train young people to carry out the diverse tasks involved in setting up the lines and connections to individual dwellings. This has been done in rural Ladakh, India in connection with PVSHS lighting (Roy 1996).

This short note is an attempt to suggest an approach to providing electricity to the urban poor. The main point is that the normal method of providing electricity to users is a non-starter for this group. There have been successful examples of implementation of a diversity of projects that have helped poor people to better their lives. It is simply to integrate them into the project that is of interest here.

Roy, S., 1996. ‘De-mystification of SPVs to provide lighting: an example of community-supported on-site initiative in Ladakh in the Indian Himalayas’, Energy for Sustainable Development, vol. 11, #5.

Prasad has been involved with technologies for rural development for over 25 years, at the Indian Institute of Science, Bangalore and leading the Wood-burning Stove Group, University of Eindhoven. He is now editor of the journal ‘Energy for Sustainable Development’.