Windpower has become an important renewable energy source in recent years. Large wind turbines are the fastest expanding sector of the energy business in the industrialized world. Every year the wind turbines grow bigger, and the cost of wind-generated power grows smaller. But what about small wind turbines? They are more expensive in terms of each unit of energy that they can produce. But they have a role to play, especially for electrification of remote areas.

Windpower can supply a house with electricity. I know this because my own home is powered by the wind, and has been for over twenty years. I live in a windy location on the coast in Scotland, and I use batteries to store electrical power until I need it. In the beginning, I was very happy to have one or two little 12 volt lamps. Now our home has all modern conveniences, including TV, computer, etc... all powered by the wind. My neighbours use Windpower too. 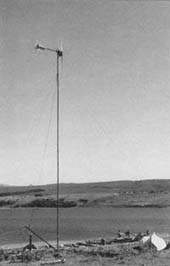 Solar systems will work almost anywhere. Photovoltaic (PV) panels simply need to see the sun and they work. Windmills are not so easily satisfied. In most places there is not enough wind to make windmills worth having. Windmills need to be on hills, open plains or coasts where the wind is stronger and more regular. They need to be on tall towers to avoid the effects of trees and buildings. Then windpower can be much cheaper than solar powder, and it also works at night! Here on the Scottish coast it is cloudy and windy, so we harness the wind.

Wind and solar work well together (hybrid system). When there is no sun, it will often be windy, and so windmills can make a good back-up for solar systems. When there is sun, PV charges the batteries the same amount every day. In windy weather there is often a big surplus of energy. Windy weather can be a good time to ‘equalise’ the batteries by deliberate over charging. On the other hand, here in Scotland I have started to use PVs as a back-up for my windmill. We run short of wind power in the summer when the sun is strongest.

Hybrid wind and solar systems can function with smaller batteries than sun or wind alone. Other sources can be used in hybrid systems: hydro, biomass, even diesel power can be a good choice if necessary.

Renewable energy equipment from western manufacturers is expensive. Developing countries may not have the capacity to produce PV technology, but small windmills are a relatively simple technology. Our experience here at Scoraig has been that correct design is more important than complicated engineering. Locally built windmills are cheaper, and usually work better and last longer than expensive imported ones. But it has taken time to develop the simple, rugged design. In recent years I have had opportunities to transfer this technology to the developing world. Quality is important, but high technology is not necessary. Small windmill production could be a perfect example of Schumacher’s principles: a local solution to a local need, bringing power to the people.

Cost of small wind turbines is not proportional to size, as is the case with an array of PV panels. 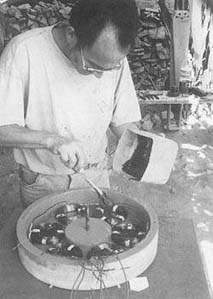 Larger units are more cost-effective in terms of electricity production. But smaller units are more affordable, and much more popular. Where a single family is concerned, a small unit is appropriate. Where village electrification is concerned, larger units, combined with PV, can offer better economics. In all cases, the results will depend on choosing a windy site.

Windmills are usually chosen by power output. Most people assume that a windmill with higher power rating will give them more power. It seems logical. But life is not that simple. Most of the time, the wind is not strong enough to enable the full rated output. Under these normal circumstances, the output will depend on two things: wind speed and rotor size. A windmill with larger rotor blades will produce more power on average than a windmill with a smaller rotor. 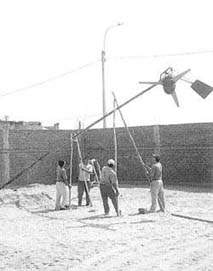 Figure 3: Erecting towers is not as simple as it looks

For example, consider two windmills which cost the same to buy. In one case the rotor diameter is 1.2 metres, and the rated power is 400 watts. In the second case the rotor diameter is larger: 1.7 metres, but the maximum power is only 200 watts. Most customers will buy the first example, because they feel that it will give them twice as much power. But the rotor is so small that it takes a very strong wind (35 mph) to reach 400 watts. This will very seldom occur, in reality. Most of the time, the larger windmill outperforms the smaller one. Nameplate rated power is not very important.

Windspeed is critically important. A 25% higher windspeed gives almost twice the power output. On most sites it pays to erect a tall tower for the windmill, so as to catch a better windspeed. The cheapest tower is a steel water-pipe, guyed with fencing wire. Safety is vitally important, too. Erecting towers is not as simple as it looks. Windmill towers can fall on people. And, in areas with grid electricity, care must be taken to avoid high voltage powerlines.

It is very difficult to predict how much energy a windmill can produce on a site. The correct way to do it is to measure the windspeed over a whole year, and then analyse the data into a frequency distribution. This process is very expensive and time-consuming.

It is actually cheaper to erect a small windmill on a site and monitor its output over a year. The output can be recorded with an amphour meter or a data logger. Or we can connect a typical household to the system and see if it meets their needs. This is probably the best proof of success, and the family in question will be the best advertisement, when it comes to selling windmills to their neighbours.

As a rough guide we can say that a good site has average windspeed in the range 4-6 metres/second (9-13 mph). A windmill with a 2-metre diameter rotor will produce 1-3 kW hours/ day on average. 1 kWh equates to charging up two car batteries, or providing 200 watts for lighting for 5 hours in the evening. A smaller windmill with 1.4 metre diameter would only give half this much power because its rotor area is half as large.

Why are there so few small windmills to be seen? Living with windpower is not simple. Wind-power is not reliable. Even on good sites, there will be periods of several days when the wind is too low to be useful. At other times there will be so much wind that we cannot use all the power. Windmills themselves are notoriously unreliable machines.

These problems can be overcome. Windpower can be very successful. The following factors will help:

· A windy site for the windmill is essential
· A reliable design with minimum of breakdowns
· Local know-how, for low cost manufacture and prompt repairs
· A backup supply for times when the wind is low (PV, diesel, or even kerosene lamps)

Small battery-charging windmills can be produced in village workshops, and used to produce electricity without environmental damage. That’s a job worth doing!