From candles to compact fluorescents

The objectives of the ELI project are as follows:

· The lowering of household energy costs, so that less money needs to be spent on energy, particularly by poor people

· The creation of employment and economic benefits arising from a robust, energy efficient lighting market

· The conservation and preservation of the environment through its ELI programme.

Bonesa, the company formed to implement the Efficient Lighting Initiative and which falls under the Eskom Enterprises banner, promotes efficient, affordable and environmentally friendly lighting technologies.

The initiative is being funded by Eskom and the International Finance Corporation (IFC), with the latter supporting the project to the tune of $2.5-million (R15-million) and the former contributing an additional $8 million (R48-million) to the programme over a period of three years.

IFC funding will be used to bring efficient lighting technology to newly electrified consumers. This will not only assist in reducing greenhouse gas emissions, but also in reducing the electricity bills of low-income groups in South Africa.

The partners will be working closely with stakeholders - including manufacturers, suppliers and retailers - to find additional funding and resources in order to achieve government-led efficiency targets; megawatt reductions to avoid the construction of additional power plants, improved environmental benefits and an increased number of energy saving lamps in the market.

The use of compact fluorescent lighting (CFLs) and other energy efficient technologies will benefit the country’s citizens in terms of comfort, affordability and energy savings. CFLs are essentially lamps that use up to 75% less electricity, but produce the same amount of light as a regular light bulb. CFLs are filled with gas, and they glow brightly when electricity passes through them. When using CFLs, a home-owner feels safe as the home is surrounded by light. This technology also makes electricity more affordable for the South African consumer.

The ELI project will mean savings for individual consumers, and it will also assist in boosting the South African economy by providing savings for the country as a whole. By using electricity more efficiently, energy will be freed up for growing demand elsewhere.

All Africa Games Village provides a showcase of energy efficiency

One project using energy efficient measures is the design of the All Africa Games Athletes Village, where the athletes’ village led the way in terms of energy saving measures.

With each unit containing 60 watt equivalent CFLs with a wattage of 13W for internal lighting, the electricity cost saving to residents is an impressive statistic on its own as each house contains four lamps - amounting to 7200 lamps in the 1800 units - which would normally have meant a significant electricity expenditure to the homeowners.

A Local Integrated Resource Plan is being implemented in the Hartbeespoort area to investigate resource availability (Figure 1), water and waste management and primarily electricity. The initiative is a joint venture between the local municipality, Eskom and the University of Pretoria.

Professor Holm, Head of Research and Postgraduate Studies of the Built Environment, in the University of Pretoria, says: ‘Although it is still early days, we can say with confidence that the project at Hartbeespoort will result in savings in electricity consumption of between 40 and 50%. This has been achieved through the implementation of a few, simple and inexpensive measures.’ 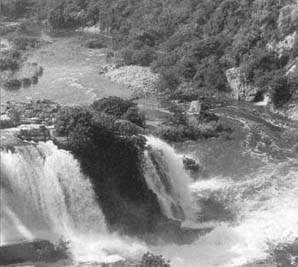 Dr Steve Lennon, Senior General Manager, Technology, Eskom, adds ‘Savings have numerous benefits for consumers, the utility and the country as a whole. The community benefits from reduced electricity bills, South Africa as a country reaps savings through better utilisation of resources (which in turn spares the cost of building or extending expensive power infrastructure), and there is less of a burden on the natural environment...’ Eskom has high hopes that, in the long run, the measures run at the Hartbeespoort pilot can be extended to other communities throughout South Africa.

Says Barry Bredenkamp, product development co-ordinator, Efficient Lighting Programme, Eskom: ‘It is human nature to emulate successful enterprises, so we selected this area to serve as a role model. Hartbeespoort is an area where the existing power infrastructure is under strain and it is hoped that the project will facilitate better use of resources, show cost savings and will set a precedent for other pilots in the future.’

The basic tools for reducing power consumption are awareness and technology, to assist residents to turn their awareness into action. Eskom has made CFLs available to the residents throughout the municipality. To date, 3000 CFLs have been sold to just over 2000 households, which is believed to be the South Africa record.

Awareness of the availability and advantages of CFLs was promoted through partnership initiatives including lighting companies, both of which were offered CFLs at reduced prices and also contributed to the customer education drive in the area. CFL advertisements, funded by the suppliers, were placed in local newspapers.

Several information centres were set up at areas where residents pay their bills. Information on how to reduce energy expenditure is readily available.

Thirty local households were selected as test cases to measure energy efficiency. This was done without sacrificing the relative comfort levels of the homes involved. The project used these houses as test cases, measuring the efficiency of their power use and the comfort level of the homes, and providing advice that would enable householders to reduce the power consumption while maintaining comfort levels. As part of the project, designs for energy-efficient low-cost housing are being developed. Low-cost housing is in the pipeline for the Hartbeespoort area sometime soon.

Other houses are fitted with small monitors that measure the power use, and can be read from outside the home, without disturbing the householders. ‘I believe this is the first time this system has been used in South Africa,’ says Professor Holm. The results proved very helpful - and we were able to provide the residents with a detailed account which specified where and how they were using electricity, feedback they could put to use to improve their consumption.’

School children have visited the information centres, where they receive Eskom kits intended for use in science and environmental awareness classes. These kits include imitation geysers and measuring instruments, to which any appliance can be attached. The instrument will give a reading showing how much power the appliance uses, and even how much it costs.

‘School children will talk to their parents about what they’ve learnt,’ says Professor Holm. ‘But of course, they are also the energy users of the future, and our aim is to make them more discriminating users of energy and purchasers of appliances.’ Three schools in the Hartbeespoort area will be integrating these kits into their teaching syllabus in 2000.

Kathleen Forssman is an Account Director at Simeka TWS Communications, the largest public relations company in South Africa, which specialises in strategic consulting and media relations.