In South Africa 15.5 million people live without indoor water and modern electric or gas geysers in their homes. The absence of such plumbing, as well as the cost of the systems themselves, generally precludes a fixed water heating system for this population. As a result of this situation, water most often is heated by burning traditional fossil fuels indoors, and at very low efficiencies.

This article presents a summary of results of a small consumer acceptance survey of mobile solar water heaters, conducted by IIEC-Africa during December 1999 in Ivory Park, a low-income township in Midrand, North of Johannesburg. IIEC chose to test mobile solar water heating devices for their potential benefits, which include zero operating costs, and zero emission characteristics. IIEC focused on consumer response as an unexplored feature of market change in the solar arena.

The primary objectives of the study were to profile energy use for residential water heating amongst low-income households of South Africa, and collect consumer response to passive, mobile, solar water heating devices.

Warm water is essential for the preparation of many staple foods, and even more relevant to proper hygiene. The fuels used to meet these water heating needs have direct impact on the health of their users, as well. When fuels are burnt inside the home, air quality and safety deteriorate. Fires are a frequent event in such households, as is paraffin poisoning. Smoke causes respiratory and eye, nose and throat ailments. The carbon monoxide from poorly designed and serviced stoves deteriorates brain functions, impacting productivity, and the ability to learn.

IIEC collected the following information to reach the primary objectives:

· Consumer responses to mobile solar water heating devices and their features, as well as information on conditions under which consumers would use solar water, heaters;

· Data on consumer willingness to pay for such devices, needs in terms of consumer finance, and conditions under which that willingness might change.

Of the estimated 292 000 people living in Midrand, about 233 000 (80%) live in households located in Ivory Park. The energy consumption patterns in these households are typical of many low-income developing communities, i.e. they use a wide range of energy sources, including electricity, in an inefficient manner, and in ways that are detrimental to their health and the local and global environment. Household energy use in Ivory Park is one of the major contributors to local air pollution, primarily due to the burning of low-grade coal for heating and cooking purposes. The preferred use of low-grade coal is due to the low cost of this fuel [1]

Thirty households participated in the survey. The households mirrored the township’s varying income levels, diverse energy use patterns and range of water supply sources (i.e., water available on stand and inside the house).

The selection criteria for the equipment used for the study was commercial availability, ease of use of the equipment, sturdiness and affordability. IIEC also gave preference to devices that were locally manufactured. IIEC selected three different devices and tested each of them over a period of three weeks. IIEC obtained thirty devices in total; ten of each of the selected products. The devices obtained were:

· A ‘wheel barrow’ type solar water heater, purchased at a cost of R766 (~ $120 US) per unit at the time of the study (December 1999). This device has a filling aperture at the top of the device near the handles. Water runs through a PVC zigzagging pipe in the body of the 1 metre long device to heat, and continues to heat in the holding tank (25-30 litre) whilst the device in strong direct sunlight. The device stands at a permanent angle of 45 when on flat ground, and has two wheels for ease of mobility. A tap at the bottom of the holding tank supplies water from the filled device.

· A soft tank shower at a cost of R60 (~ $10) per unit. This shower also known as a ‘pillow case’ device or ‘bladder, is made of black soft plastic sheeting on the one side and a transparent plastic sheeting on the other side. It has a short transparent plastic outlet pipe with a small red shower-head at the end. To open and close the shower, the user pulls the shower-head vertically up and down. The volume is 18 litres.

· A third device, almost identical to the solar shower but with a different aperture device, R70 (~ $11 US), 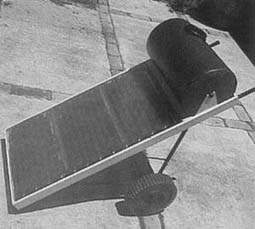 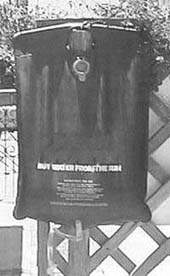 The baseline interview indicated that:

· All participating households use hot water for bathing and most also for cooking. A small percentage uses hot water for laundry.

· Although the households were electrified, only 13% of the participants use electricity as their sole fuel for water heating. Twenty percent rely solely on paraffin for water heating, and the remainder (67%) use a mix of fuels to meet their water heating needs.

· Few of the formal households have electric water heaters/geysers installed. The few households that have these installed do not use them often, or at all, because of the high cost related to their use.

· Households use various appliances such as electric kettles, ordinary kettles and pots to heat water on either electric, coal or paraffin stoves. None of the households used gas.

The survey further indicated that:

· The devices met almost no resistance in terms of the cultural or status perceptions.

· Many participants were unimpressed with the low volume device. They found the time/volume trade off unappealing.

· Survey participants offered few comments on design or features of the systems tested.

· Solar water heaters meet many, but not all water heating needs in low-income households surveyed.

Due to their simplicity, utility, and low generating costs, low-cost solar water heaters offer a superb service to consumers. To date, however, both suppliers and government policy have largely overlooked this serviced market. Survey participants, were prepared to seek these devices through existing commercial avenues, as long as standard consumer finance was possible. None were aware of the devices before the survey.

The report compiled by IIEC on this work has several recommendations following the results obtained. For more information contact IIEC-Africa.

Winrock International commissioned and sponsored this study with generous support from the US Agency for International Development. IIEC gratefully acknowledges the collaboration of the Midrand Eco City projects, and of the survey participants.

Ketlametswe Nkambule holds a BSc Ed degree from the University of Bophuthatswana and a Certificate in Energy Policy Planning and Management from the Minerals and Energy Education and Training Institute. At present she is a Co-ordinator of the Eco Home Advisors Programme at IIEC-Africa, which aims at improving the quality of low-cost housing in South Africa through the promotion of passive solar design principles.