This article is a case study of work being developed by ITDG East Africa and the Ministry of Energy in Kenya, with financial support from UNDP GEF Small Grants Programme. The project idea started with a meeting between the Ministry of Energy and ITDG staff in March 1997 as a result of the emerging potential of the micro-hydro sector in Kenya. Consequent activities, included seeking for financial support among the following components, started in May 1998:

The feasibility study involved identifying suitable sites countrywide for community micro-hydro power schemes. A detailed desk study of the legal statutes was important as micro-hydro power generation involves various aspects of resource management, such as water use, land use and ownership. The study included a background of the general situation of micro-hydro activities in the country.

Criteria were developed that helped to identify sites for potential development, and assisted in prioritising the site that would be developed for demonstration. The criteria proved very important during the field visits that were made across the many rivers and rivulets; a sample is provided in Table 1.

Two potential sites for the installation of the community micro-hydro power scheme were identified from a list of over twenty. A detailed feasibility study was conducted on the two, including a social economic survey. Based on refined criteria, a site on the Jiameceu Falls on the River Tungu was selected, about 200 km north of Nairobi, and 12 km from Chuka town, close to Mbuiru village. The social survey helped the team to assess the demand and the potential load factor of the proposed scheme. Technical aspects were studied in detail to ascertain the design and the layout of the scheme. Community micro-hydro power schemes were a completely new concept in Kenya.

ITDG, the Department of Renewable Energy of the Ministry of Energy, the Nottingham Trent University UK, and the Ashden Trust initiated training courses on skills, technology transfer and capacity building. The training courses included participants from other countries.

The result of the social mobilisation process was the formation of the Tungu - Kabiri Micro-hydro Power Project management committee. The scheme will be operated on a commercial basis through share-holding in the company with support from local government departments.

Table 1: Criteria for selecting a site for micro-hydro 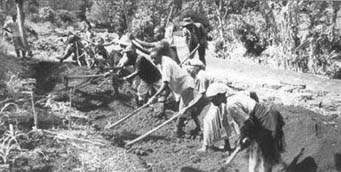 The ownership structure will fall in the following categories:

· A commercial hydropower group, comprising Mbuiru village community members, who have contributed towards the project.

· A community power company owned by community members through shares

The community has contributed in the following ways:

· Identification and provision of local artisans and resources

· Labour for, among other things, construction, moving building materials; blocking the river during construction; off-loading lorries. (Every Tuesday is a community working day which is costed in the project by the community members.)

· Land provided by the Government for building the power centre and canal; storage space for construction materials and equipment; a pressure lamp for night work; materials for blocking the river during the construction

· Maintenance of the canal (to keep it wet and prevent cracking)

- Community members have organised themselves into a commercial development group, which has initiated a project fund for activities related to the hydro scheme.

- They have acquired, from the Government, one acre of land to build a power centre where micro enterprises, served by the power from the scheme, will be located.

- The community has been empowered to put development issues on to the agenda and is looking at other development activities utilizing power from the scheme.

- The work has attracted the attention of NGOs, government ministries, private agencies, individuals and donors. For example, two smaller schemes will be installed in Kirinyaga district through collaboration with Nottingham Trent University, ITDG, and the Ministry of Energy.

- Funding for related activities, such as a turbine manufacturers’ training, in collaboration with the Renewable Energy Department, ITDG and Jomo Kenyatta University of Agriculture and Technology and Nottingham Trent University, have been obtained.

- The scheme has become a centre for education on energy and environment for local schools.

Use of micro-hydro power

The scheme will contribute significantly in raising the income and improving the livelihoods of the Tungu - Kabiri river communities.

- Replacing the diesel engine currently in use for maize grinding by hydro power.

- Replacing kerosene for lighting. The community will not benefit at present from a power-distribution system (especially for lighting their homes) but will use the energy by charging batteries for both lighting and running their radios or TVs.

In a country where there is no micro-hydro power infrastructure, the following were found important factors to consider:

- The level of involvement in micro-hydro power development

- The potential for micro-hydro power development, ascertained by carrying out a pre-feasibility study

- The legal statutes and procedures

- A lobbying process to policy makers, development organizations, donor and support organizations and the to community groups to create awareness of the role of micro-hydro power in development

- Training of potential micro-hydro experts during the pilot scheme.