The word ‘electrification’ conjures up bright lights and urban expensive high technology powered gadgets, often considered as an unlikely intervention for the poor. This has led to the slow rate of high-grade energy technology intervention in remote or rural areas of developing countries, where over two-thirds of their total population live. However, there have been successful cases of bringing in electrification, in the form of micro-hydro plants (smaller than 100 kW usually), solar or biomass options to light up rural areas. Apart from lights and domestic usage, they provide energy to power small scale industries as well. Nepal has had almost two and a half decades of historical experience in bringing electric power to its villages, initially with mechanical systems to run milling machines and later when electrification came in the 1970s. Some systems are as remote as 7 days walk away from the main roadhead.

In Nepal, electrification projects are no longer seen as technical interventions alone. Practitioners and critics conclude that ‘electricity if targeted at the poor alone’ would not be a realistic approach. This is often because the poor alone cannot risk the heavy financial investments that are required to build and maintain an electrical system. In addition, the lack of proper feasibility studies, quick assessments, and non-participation of the beneficiaries has led to failures in some cases. However, alternative approaches are widely applied in electrification development interventions. The need to get communities actively involved is becoming a crucial factor for sustainability and improved livelihoods. This article is based on some of the Nepali experiences in the micro-hydro sector.

A wider social strategy for intervention:

In Nepal, organisations and individuals working in the field of rural electrification have realised that the only way to be successful, while keeping in mind the poor, is to integrate technology within a wider social strategic approach. Participation of communities is key to understanding and implementing projects.

Often, energy constraints are about the same for both the rich and the poor. The wider social approach does not consider them as separate entities but that they are bound to each other in complex relationships that need to be fully understood. Therefore, thorough investigations and full participation by all sections of the community is increasingly becoming prominent. Often, participation is achieved through a series of meetings, group formations, exposure trips and training for women, men and unemployed youths. In fact, electrification could reach the poor by maximising and tapping the potential of the richer sections of the community. One of such example is the case of Tikhedhunga presented below.

Within the integrative social context, the intervention approach takes into consideration all members of the community and how the benefits could be widely and equitably distributed. In many projects, benefits are largely unequal between the rich and poor, a major point of contention for the critics of rural electrification projects. To make this possible, poorer sections of the community are all included to meetings and given equal opportunities to be members of the Village Electrification Committee. For example, in the successful community mobilisation process implemented by the Rural Energy Development Project (REDP), a UNDP project, there are many cases where both poorer men and women have been actively participating in the decision making processes by forming their own social groups. They are allowed equal rights to attend training and start income generation activities or engage in group-saving and credit schemes. It is not necessarily only with lighting that communities benefit. Sometimes, as in the following Pinthali case study, micro-hydro plant succeeds because of the integration of resources, both human and natural. 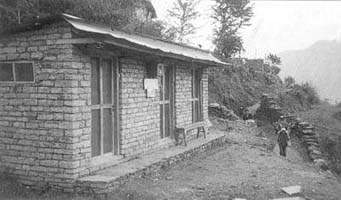 While considering the wider intervention approach, the issues of equity and right to informed choices comes uppermost in successfully integrating the poor. Theoretically, the benefits of electrification to all sections are almost the same; however, their capability to utilise it may not be. In many schemes for example, equal participation of all members of the community is made compulsory but the benefits do not accrue to the same. Some electrification plants in Nepal show this gap primarily because issues like information on usage of electricity, tariffs etc are not discussed properly with the poorer sections of the community. The fact that they are less educated makes the informative process a top-down one in many instances. Equity is possible only by including the poor, especially women, to participate actively in the provision of all information processes. The following case gives a general picture of the benefits women accrue from an electrification scheme.

The right to information and choices based on it have been crucial to the promotion of benefits to the poor. Information sharing can lead to communities valuing the range of options. In Nepal’s remotest areas where the government body Remote Area Development Committee (RADC) works, micro-hydro was their main concentrated energy programme to replace expensive kerosene or inefficient lighting woodfuels. However, in recent times, they have also taken in solar panels as another option to make it more cost effective and accord to peoples needs, mostly for lighting only. Beneficiaries were therefore provided with a wider informed choice. In Ghandruk village where the community successfully runs a 50 kW scheme, it has been now realised that initial phases had not concentrated on providing equal information to all members of the community. Today, even if there is equal participation in terms of labour provision and meetings, poorer people have not been able to access enough electricity as the richer people (who often owns lodges) have already used up majority of the limited power supply.

Although, low cost electrification schemes have often been considered the right alternative to fossil fuels and expensive grids, the lack of incentives - financial, structural or institutional, makes it a difficult proposition to follow. An integrative social approach shows promise and furthering it will only be possible with the support of all stakeholders. The key point in the participation process to gain equity and enhance information sharing is that of transparency. Often, communities feel that they are not provided all the right answers or informed inaccurately. Practitioners should learn to be open about the processes and its mistakes and also simultaneously create room for the communities to be transparent themselves. Open meetings involving the poor and women are crucial if equity is to be assured. 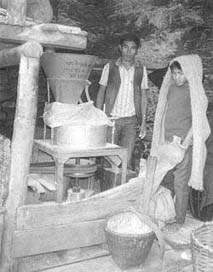 In conclusion, a gradual holistic approach not only in terms of natural resources as electrical systems demand (such as water for hydro or light for solar) but by linking it up actively with individuals’ or communities’ social, cultural and economic potential should be the way forward. Continual assessment with communities and partners are required and equal opportunities prioritised. Low cost electrification technologies and their intervention must be continually assessed, researched, developed and disseminated. To lift the poorest of the poor out through electrification is no doubt a difficult proposition. However, to try to get there by using an integrative social approach through the right information processes is showing positive results. A clear analysis of time, place and build up of expertise will lend a hand to improved access to electricity for all.

Kavita Rai trained in Anthropology and worked as a social scientist with ITDG Nepal for 6 years. At present, she is based in Kathmandu as a Social Development Consultant with interests in energy issues.