Fuel for lighting; an expensive commodity

This article was adapted by the editor of Boiling Point from the article ‘Fuel-based light; large CO2 source, which appeared in IAEEL newsletter 2/99 - The web address for the original article is: http://195.178.164.205/IAEEL/iaeel/newsl/1999/tva1999/NatGlob_a_2_99.html. This article presents preliminary results of a forthcoming study being conducted for the International Energy Agency. Readers interested in copies of the final report are welcome to contact the author.

For the world’s two billion users of fuel-based lighting, the cost of lighting their homes rivals that of affluent households who enjoy the vastly higher levels of quality, safety, and services provided by electric light. According to the World Bank, 24% of the urban population and 67% of the rural population in developing countries are without electricity today.

Unlike heating or cooking, lighting is one of the energy end uses that is often associated exclusively with electricity. But the reality is different: In fact, about a third of the world’s population uses fuel-based lighting. The extent of rural electrification varies widely from country to country, e.g. about 90% of the population in Africa is not served by grid electricity, versus 20% in Mexico. Some countries (e.g. Burundi and Rwanda) have barely passed the 1% electrification threshold. 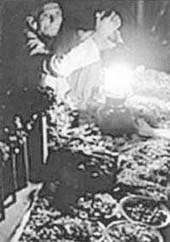 While the levels of illumination provided by flame-based lamps are far lower than with modern electric lighting, the efficiency of fuel-based light production is also low. The result is a substantial amount of fuel used with poor lighting received in return (Figure 1).

In some instances, the rate of electrification is high, and one could argue that fuel-based lighting energy use is a temporary problem. Yet, in Sub-Saharan Africa the rate of electrification has been only 25% of the birth rate over the past 20 years (i.e. 55 million out of 220 million people). An estimate for Kenya projected rural growth of 65000 to 85 000 households in 1996, of which only 4000 to 8000 would have electric grid connections. In South-east Asia, the net effect of new electrification and population growth was an increase of 250 million people without electricity during the two-decade period of 1970 to 1990. However, in China, the opposite effect was seen (electrification exceeding population growth).

The state of affairs concerning fuel-based lighting is worrisome. Oil import dependency is generally high in developing countries, and it drains valuable hard currency. Because it is inefficient, fuel-based light is hard to work or read by, imposes a high cost on very poor households, and seriously damages indoor air quality.

Meanwhile, electrification (for lighting and other energy services) has its own problems, not the least of which is the extraordinary cost of electric transmission and distribution costs and low system efficiencies associated with providing centralized power generation in such conditions. A further limitation is the high cost for families buying electrical appliances and setting up electrical circuitry in their homes.

The world of fuel-based lighting

According to a 1995 study, typical household kerosene lamp use is 3 to 4 hours per day, with weekly fuel consumption of about 1 litre. Typical light outputs are 10 to 15 lumens for locally-made lamps and 40 to 50 lumens for store-bought models. Placed in perspective, the lower end of this range corresponds to about 1% of the light produced by a typical 100-watt incandescent lamp.

A study conducted by the joint UNDP/World Bank Energy Sector management Assistance Programme (ESMAP) found rural households spending as much as US$10 per month on lighting from candles, kerosene and dry cell batteries (1). This operating cost is similar to that paid by industrialized households with two dozen bright electric light sources throughout their home.

Many suppliers of energy-efficient lighting equipment have not found the rural markets in developing countries worth exploring. However, the large amounts of money spent on lighting fuel indicates that there is a considerable potential for spending money on alternatives, for instance PV-based lighting solutions; this was verified in a field test by the World Bank.

We could find no estimate of the global lighting energy use associated with fuel-based lighting. A very approximate one is developed here, attempting to capture the uncertainties by considering a range of values for important factors that are not well known. We assume:

· a non-electrified population of 2 billion
· the kerosene lamp as the reference light source
· the penetration of lamps as between one lamp per six people and one per two people
· the fuel consumption at 0.04 to 0.06 litres per hour
· the daily usage at three to four hours

We have estimated only the household contribution to fuel-based lighting, lacking sufficient basis for assumptions necessary to evaluate the service and industrial sectors. The pressurized kerosene lamps used in businesses have a much higher hourly fuel-use rate. The energy requirements for households who use fuel-based lighting as an alternate light source (e.g. during blackouts) have also not been estimated.

The main findings, including ranges of uncertainty, are:

· Between 15 and 88 billion litres of are consumed each year to provide residential fuel-based lighting in the developing world.

The amount of light (measured in lumen hours) is approximately 1/1000th that enjoyed by households in the industrialized world (more sources; more efficient sources).

Within developing countries, the amount of fuel used in the country to provide fuel-based lighting energy can even be large compared to the amount of energy consumed to provide the electricity used for all purposes. One study noted that kerosene accounted for nearly 60% of the total energy requirement for lighting in India’s household sector in 1986. According to our estimates, fuel-based lighting in Brazil consumes 40% as much energy as that required to produce the electricity used for lighting in the country.

Among the more startling implications of these findings is that users of fuel-based lighting in the developing world spend as much or more money on household lighting as do households in the industrialized world, but receive a vastly poorer level of service. On a percentage-of-income basis, households in developing countries spend many times more for lighting than their counterparts in the industrialized world.

Some argue that the problem of fuel-based lighting is not a priority, given the environmental impacts and costs of other end uses, such as cooking. However, few would dispute that improving the quality and quantity of light available to households in the developing world would yield dramatic social and health benefits.

Dr. Evan Mills is a scientist at the Lawrence Berkeley National Laboratory, specializing in energy end-use efficiency and energy policy.