Demand side management for rural Nepal

Nepal has a long history in rural electrification, particularly through the efforts of a mature micro-hydro industry. However, in recent years, there has been a slowdown in the number of plants being installed throughout the country. The general conclusions that have been reached include:

· micro hydro plants (MHPs) that have only lighting as an end use are not financially sustainable, particularly in the more remote districts

· training for developing technical and managerial skills is important;

· not all systems have been properly designed

Many of these problems result from a focus on the supply of power without analysing the demand. The willingness to pay for MHP systems varies throughout the country, from 15 NRs/month in the most remote and poor districts to about 200 NRs/month in the richer districts (100 NRs = US$1.35). Although these figures are approximate, at a capital investment of about 14000 NRs (US$200) per household, it is clear that it will take many, many months to recover the initial investment if there are no other income-generating end uses for the MHP.

One solution is to reduce household power consumption, allowing the power generated to be shared among more households. Several innovative projects are now under way which focus on this approach.

A recent project by Ghanashyam Ranjitkar (ITDG/Energy Systems) and Nigel Smith (Nottingham Trent University) introduced the pico power pack to be used with CFLs. Household consumption was limited to 40W, allowing only the use of one 15W CFL and one 25W bulb, allowing more than twice as many households to be connected. A DANIDA-funded research program will soon be undertaken by Mr Ranjitkar and Stewart Craine (LEDCO/AVI) to assess which CFLs are most suited to run from micro and pico hydro systems. DANIDA is very interested in this research, as its five year Energy Sector Assistance Program has just started, with one component involving the promotion of micro hydro systems. The results of this research will be used in an upcoming AusAID project for 150 households to demonstrate the cost-effectiveness of a 5kW pico power pack and CFL lamps.

A lease-purchase agreement for the CFL lamps will most probably be created between a local entrepreneur and the electricity users, combined with a service fee so that the entrepreneur is responsible for maintaining the power supply and transmission lines. LEDCO, a community based electricity development company, will support the entrepreneur at a district level, and Energy Systems will assist LEDCO with the design and implementation of the scheme. This will ensure ongoing technical support and a frame work for expansion if the capital cost reductions of at least 50% are realized. It is hoped that this project will illustrate the advantages of CFLs for rural electrification.

LEDCO has also completed a study on using a hybrid system for rural electrification. Overnight energy from the micro hydro is stored in battery banks in a nearby second village and used later for small DC fluorescent tube lights. From 6am to 10pm, the power is diverted to the original village for lighting and agro-processing activities. The result is a system with a plant factor over 80%. If the battery banks are added to a CFL system similar to that described above, over 200 households can be supplied from a 5kW pico hydro. Using standard bulbs and 100W per household, a 20kW plant would be required, costing approximately 2 800 000 NRs (US$40000). The capital costs are at least 30% less than a conventional-bulb lighting plant. This design is most useful when only a small amount of power can be developed from a small stream located within 2km of one or more rural villages.

Traditional water-driven grinding mills (ghattas) are also are cheap source of power. A 10-year GTZ programme has concluded that improving the efficiency of ghattas is economically and technically sustainable. The electrification of improved ghattas takes advantage of existing infrastructure and community practices, which should increase the chances of sustainability. The day-time load is already used for agro-processing, so the plant factor will be over 50%. These ghattas can provide electricity via a transmission system, or can also function as a battery charging station. 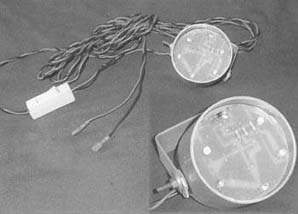 Figure 1: A digital picture of a 6 cluster WLED lamp. 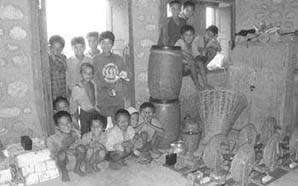 Figure 2: Children, pedal generators, batteries (in the white boxes by the wall) and a powered up 6 cluster WLED lamp held by one of the children - Thulo Pokhara village

The Nepal Light Project (NLP), led by Dave Irvine-Halliday from the University of Calgary, recently completed the world’s first permanent installation of large-scale rural lighting using white LED lamps. These lamps consist of a cluster of white light-emitting diodes (WLEDs) mounted on a printed circuit board, with very simple electronics to complete the circuit. While the light emitted does not project as well as a 15W bulb, it is bright enough for moving, cooking and reading, which are the primary activities of rural people during the early morning and evening hours. The NLP was generously supported by Nichia of Japan, the leading manufacturer of WLEDs.

Each lamp requires around 0.4W, and there are 6 WLEDs in the lamp cluster. The diodes are rated at having a life of 100000 hours, which is 45 years if used 6 hours a day. This recent innovation represents a new low-cost entry point for rural lighting. The cost of these diodes is decreasing as rapidly as the efficiency is increasing, and some companies are already selling WLED lamps. One such lamp from the Kathmandu company, ‘Pico Power Nepal’ is shown in Figure 1.

In some areas of Nepal, pico hydro, solar or wind power are not viable energy sources, so human-powered technologies are used to fill this niche. In this case a dynamo is rotated at a comfortable speed via a pedal generator, making it suitable for young children to operate while the parents are involved in more pressing activities (Figures 2 & 3). Each home received one 12 Volt sealed lead acid battery and a 6-cluster WLED lamp and time-shared a pedal generator with between six and eight other homes since there are four pedal generators per village. On average, the user will pedal for around 30 minutes to recharge a battery that has provided 4 hours of light (Figures 3 and 4). Each lamp draws only 40 mA. By September 2000 the pedal generator set-up will be changed to allow 4 batteries to be charged simultaneously. The life of the SLA is expected to be many years, as they will be recharged every day at precisely the voltage recommended by the manufacturers. The average cost per home for these first two villages was approximately US$69.00. It is confidently predicted that this cost will be reduced significantly in the future due to:

· reducing the Ah of the battery and the sharing of batteries between 2 to 4 homes.

The second NLP project involved the relamping of a village that was testing a pilot 200W low head pico hydro turbine that was running 160W of bulbs in the district of Jumla. Jumla is extremely remote, being 6 days walk from the nearest roadhead, and extremely poor. Lighting is currently from sap-filled sticks that emit a lot of smoke when burnt, adding to already substantial health problems. Kerosene is too expensive as it is transported in by air. Twenty-eight households were connected, using a total of 80 lamps. The turbine has an output at 220V AC to allow for long transmission distances. Average household consumption was a tiny 2W per household. The WLED lamps were designed to be compatible with existing batteries and converters and cost about US$20 each. This project was undertaken in collaboration with LEDCO, Energy Systems, Pico Power Nepal and the Karnali Community Skills Training project in Jumla, a United Missions to Nepal initiative. Plans are under formation for the extension of a nearby 8kW micro hydro to the 600 surrounding households, which will increase the income for the plant by over 500% at a level that is affordable for everyone. 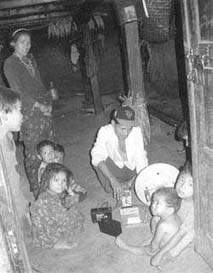 Figure 3: A villager in the village of Raje Danda charging his battery first thing in the morning. 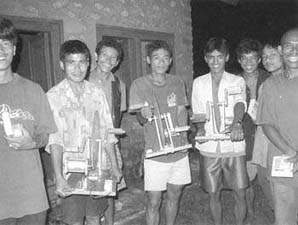 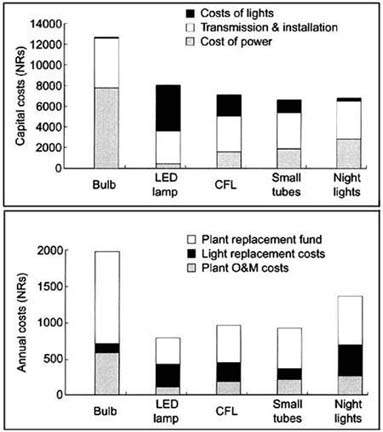 Figure 5 shows the approximate costs of the systems described in this article. It is clear that an investment in energy efficient lamps and demand side management is an important step towards providing the most economic and easily maintained rural lighting system. The onus is now on the development agencies to ensure the income-generating schemes they propose justify the larger plant they often require, and not to assume that economic development will take place once access to electricity is ensured.

Stewart Craine is an AVI volunteer working for 2 years with a Nepal hydropower company, LEDCO. His background is in civil engineering and mathematics. The focus of his placement is to optimize rural energy solutions for villages that will not be connected to the national grid in the near future.