Kerosene as a cooking fuel: What are the prospects?

It is now widely acknowledged that in many developing countries, the long term sustainability of natural forests is threatened not only by the current level of biomass energy consumption but also by other vital activities, mainly agriculture and pastoral-ism. Although the environment is increasingly a major concern at national and global levels, less attention is paid to environment by local populations who rely on natural resources to meet their basic needs (Figure 1). It is very difficult to get long term environmental strategies accepted by people who are facing, on a daily basis, shortages to meet their basic needs. 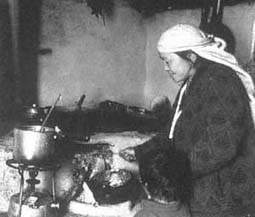 Figure 1: Woman using both biomass and kerosene to cook

As far as environment is concerned, kerosene seems to be to the obvious choice as a transition cooking fuel in many developing countries, particularly for populations with low and middle incomes. The equipment is cheaper compared with LPG stoves, there is no need to invest in a cylinder bottle to store the fuel, it can be bought in very small quantities according to the income of the consumers. The transportation costs are low compared with LPG.

At the macro level, kerosene is very often considered as a basic commodity and therefore, the level of taxation is very low or non-existent. For example, in Senegal, there is a huge discrimination between the various petroleum products. Taxes account for some 50% of the retail price of petrol in 1998 whereas in the case of kerosene, there are no taxes. Despite these significant comparative advantages, the rate of penetration of kerosene as a cooking fuel is still very low because cost is not always the main reason for substitution over the short term. A survey carried out by the World Bank in urban households of Burkina-Faso has shown that only 4% of the household own a kerosene stove and 9% own an LPG stove although it is more expensive.1 Even in a very poor country like Haiti, it has been estimated that 11% of urban households own gas appliances despite the fact that kerosene stoves are cheaper than gas stoves.2

Kerosene and its end uses in sub-Sahara Africa

Kerosene is the most widespread fuel for lighting at the household level. Kerosene lamps3 (also known as hurricane lamps) are a very common feature in most rural households. However kerosene use as a cooking fuel is still very limited. The case study overleaf, which is fairly representative of many families in rural and peri-urban Sub-Sahara Africa, gives a good illustration of the pattern of energy consumption, the low level of consumption of kerosene as cooking fuel and its importance as an energy source for lighting.

In urban areas because of the availability of LPG and the pattern of consumption, it is unlikely that kerosene as a cooking fuel, particularly in Africa, will play a significant role. However there is an important niche over the mid term in poor urban and rural areas. This is illustrated by the trends in energy consumption in various towns and cities world-wide.

It can be observed that the fuel consumption tendency in the capital of Peru, Lima, has been changing. Initially, many families used kerosene because it was the cheapest fuel. Now, many families use gas even though they cannot buy the small quantities available for kerosene. Some 69% are currently using LPG and only 19% are using kerosene and 15% both fuels. However gas is less expensive than kerosene on a monthly basis.4 In Morocco the national energy consumption of kerosene declined from 70 203 tonnes in 1978 to 46613 tonnes in 1993. This sharp reduction is mainly due to the penetration of LPG in rural areas who used to rely heavily on kerosene for cooking and lighting.5 Such a strategy has contributed a great deal to lessen the pressure on fuelwood, particularly in areas with fragile eco-systems such as mountains. In India, the National Sample Survey Organisation (NSSO) came up with similar trends.

If there is a world wide trend towards cleaner fuels when income increases, there are still many disparities dependent on the continent, social behaviour and pricing policies.

In India, household energy consumption was positively correlated with income, for both rural and urban areas. A recent survey in slum areas of New Delhi shows that 80% of the total households used kerosene as cooking fuel either as the only source or in combination with supplementary sources of wood, cow dung or LPG. Although kerosene is used by all the social categories, the percentage is higher for low-income people.6 It is interesting to correlate the popularity of kerosene with its affordability. Indeed the same survey showed that poor people buy their kerosene at a subsidized price through a Public Distribution system. The amount of subsidised kerosene is limited to 12 litres per family per month. The importance of kerosene is such that 50% of the families had to buy additional quantities estimated at 2-6 litres per month from the open market at a price which is nearly 1.5 times higher that the PDS price.

A low penetration in Sub-Sahara Africa

In sub-Sahara Africa and, in particular, in Sahelian countries, the penetration of kerosene as cooking fuel is marginal and mainly promoted by projects, which means that there is still an important element of subsidy.

Despite these disappointing results, there is a niche in peri-urban areas and a large market in rural areas. The widespread use of kerosene among low income people in India shows that the penetration of kerosene as a cooking fuel in rural areas of sub-Sahara Africa could dramatically increase if an adapted and affordable stove is available targeting, as a priority, peri-urban and rural areas. Indeed, in urban and peri-urban areas of poorer countries, kerosene is ideally placed to play the role of a transition cooking fuel to LPG.