Over 130000 stand alone, small wind generators (mostly 100W) are used by pastoralist people in northern China. The lifestyle of these people has changed significantly over the last couple of decades, so much so that they are no longer really nomadic. Although most now live in permanent houses, often brick built, life still revolves around herding sheep and goats. Farmers tend to live in small villages, but herdsmen live an isolated existence, often several kilometres from their neighbours, and electricity makes an important contribution to their quality of life.

The information presented here is drawn from a research project (1) funded by the UK Department for International Development (DfID).

In those homes with a supply, electricity is used for lighting, TV and radio, although larger systems can also run a fridge/freezer. Wind generators are the most common source of electricity amongst herdsmen, although the project survey included families with diesel generators, a photovoltaic supply (PV), and wind/PV hybrid systems, and some with no electricity. 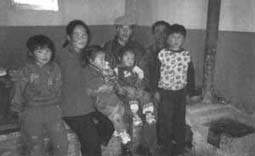 · controller to protect battery from overcharging

· household wiring; wiring may simply be laid along the floor, or is neatly set into walls with switches and sockets

Wind generators are generally erected close to the rear of dwellings, facing the prevailing wind direction, so that the electrical cable can be slung between the two without trailing on the ground, where it would be damaged by animals. Towers are not higher than the buildings, but since most buildings are built facing south, the generators installed to the rear catch the north-westerly winds.

Wind generators are manufactured in Inner Mongolia - out of 11 manufacturing companies, 3 have now discontinued production. Although early models were unreliable, most people reported having to replace blades only once or possibly twice, and only few had to replace bearings at all. Bearing problems are not generally regarded as serious as people can often replace them themselves and bearings are cheap. Machines now in the field are achieving a life of 15 - 20 years.

A culture of training exists in Inner Mongolia, with many herdsmen attending training courses, and extension services making regular contact through home visits or meetings at markets. The Science and Technology Commission (S&TC) were given credit for training users, but the most commonly reported source of information was printed instructions.

Several people complained that they did not get enough energy out of their system. In low wind-speed areas (eg. 4.6 m/s) there are likely to be power shortages during the summer months, but reports point to more fundamental problems. Even though designs feature automatic furling mechanisms, which either turn the rotor out of the wind or progressively apply a hub brake, many people manually furl machines in high winds. Reasons given were:

· blades break when sudden braking is applied at high speed
· batteries are damaged from overcharging in high winds.

It is not clear at what windspeeds people furl machines, but the energy captured obviously falls as furling windspeed is reduced eg. a quarter of the energy available is lost if furling is reduced to 8m/s.

Batteries were a universal target for complaint. Some blamed poor battery quality, others claimed distilled water bought in towns can be ordinary water, and so on. At 5 years, the average life of the Ni-Cd batteries was twice that of lead-acid batteries, but they are three times as expensive, so they should be phased out. 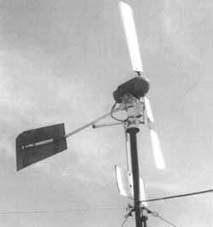 Figure 2: A typical small wind generator (100W) made in China

Preliminary interviews were used to gather information relating to the purchase and use of wind generators. Participatory exercises with herdsmen (and their wives) were then used to quantify opinions and attitudes.

· Reasons for preferring a wind generator (over alternative systems). Although 'no fuel costs' was most significant (22% of votes), it is clear that economics is not the main driving force - quality of life issues such as 'easy to repair', 'reliable', and 'don't have to start/stop engine' accounted for nearly half of all votes cast.

· Equipment used with wind generator. People gave light and TV as their motivation for buying a wind generator, but light for people was clearly identified as most important - 44% compared with 25%. Light for animals was also important, despite only being required for a couple of months during the lambing season.

· Status of electrical equipment. From a list of general household and farm equipment, items for economic activities (eg. fencing, transport) were more important than electrical items.

· Seasonal energy availability. Results give remarkable agreement with figures based on measured data from a wind farm site in Inner Mongolia. This shows a strong awareness of the wind, indicating the importance attributed to electricity, despite the low ranking above.

The S&TC reported that demand was poor in the early days when systems provided lighting only, but the introduction of a broadcasting station in Inner Mongolia in 1980 created a demand for TVs, and consequently a surge in demand for wind generators.

Herdsmen have always had to pay for wind generators using their own money, but a general subsidy was introduced in 1986 (equivalent to 15% of system cost at the time).

During the course of the survey, several indications were given of how much people were prepared to pay for an electricity supply. These figures, expressed in terms of sheep, were divided into the individual's wealth (flock size) to give a capital/cost ratio:

The lower limit of capital/cost ratio at which a wind generator system is affordable is about 7.

One man with a flock of 300 said that 5000 RMB (Renminbi) would be the maximum that he could afford for a grid connection; capital/cost ratio = 18.

Another man with a flock of 700 said that he would be prepared to pay up to 10 000 RMB for a high quality electricity supply; capital/cost ratio = 21.

This shows, as might be expected, that people are prepared to make a greater sacrifice to obtain their first system than they are to upgrade to a higher quality system.

High capital cost is usually a stumbling block to renewable energy technologies, but this does not appear to be a problem in Inner Mongolia. At 2500 RMB (£200) for a small system the cost is high when compared with rural per capita income - 1600 RMB (1996), although this figure should be treated with some caution. What is interesting is that herdsmen have access to readily convertible capital in the form of sheep and goats, so they have no need for credit. A second hand market is now developing, stimulated partly by the extension of the grid to villages.

Electric lighting gives more light and is more convenient than candles and oil lamps. However, it is difficult to see what quantifiable affect this has on the lives of herdsmen. Although literacy is high, reading does not appear to be part of the culture and few books or magazines were seen in homes. In remote areas of Inner Mongolia, children tend to be sent to cities for education, so household lighting can have only limited impact on their education.

Similarly with television, nobody could give an example of how it had materially improved their lives. Families reported watching several hours of TV every night, and said they benefited from an increased awareness of current affairs in China and overseas. A few people said Mongolian language TV, which features lengthy 'infomercials', was their favourite, but nobody admitted to buying anything after having learned of it from the TV.

Electricity contributes to the subjective quality of life. Herdsmen evidently attribute significant value to this benefit, as they are prepared to pay a premium for it. In the future, the introduction of higher load items such as fridges, freezers and washing machines will undoubtedly have a material affect on people's lives.

Wind generated electricity is highly valued amongst herdsmen, even though it does not appear to bring immediate economic benefit. Benefits are more in terms of quality of life, such as entertainment and education (TV), and improved lighting. Quality of life issues are also important in selecting the electricity generating system - reliability and ease of repair are more important than simple economics.

Through communication between users, S&TC and manufacturers, indigenous wind generator designs have evolved into products that are appropriate to the market. Parts are available and, as motor vehicles are widespread, people are familiar with common aspects of the technology such as bearings and generators.

Some families have used wind generators for 20 years and economic conditions are improving, so aspirations are increasing and people now want larger capacity systems. The authorities predict that by 2020, 350000 households will still be too remote for grid connection and several institutions are already developing larger systems, mostly based on wind/PV hybrids.