A version of this article first appeared in The Journal of Design and Technology Education, UK, Volume 4 No 1.

Technological innovation is not always welcomed by everyone. I had known this, from my work as a historian, looking at the first period of industrialisation in England two hundred years ago and was interested to see if that was also the case in present day Indonesia. I had gone out to Lombok, the island immediately to the east of Bali, to spend two weeks on a project building simple solar ovens. It occurred to me that while some simple, yet powerful scientific and economic arguments might favour the successful introduction of solar technology, some social structures and cultural values might prevent it.

On paper, though, the signs were good: Lombok is only eight degrees south of the equator, and so, haze permitting, there is enough solar radiation to make this technology viable for about half the year. The people we met seemed to acknowledge the potential benefits of tourism, trade, and 'modernity'. As a consequence, Lombok, which is emulating the economic prosperity of its neighbour Bali, through attracting more tourists, will inevitably be adversely affected environmentally and culturally. 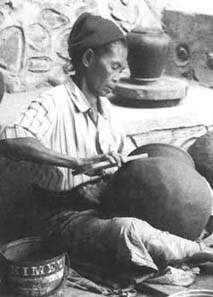 National statistics produced by the Indonesian government have given a clear illustration for the need to introduce alternative forms of energy. Of a total population of 182 million, about 40% use charcoal and fuelwood for cooking. If one assumes that 2 kg of wood is used by each family per day, then 7.59 billion kilograms of wood is needed each year. This uses a lot of trees, creates a lot of smoke in people's lungs, requires a lot of time collecting wood and, more especially, a lot of the newer branches of trees in young secondary forests being destroyed. Conservation and economic arguments have an obvious link: wood costs money and ten pence a day for wood is a great deal when the daily family income may only be 40 to 60 pence (about $US1).

Many women's occupations, weaving, and making pottery, for instance, can be carried out in the home, thus make cooking and child-rearing possible (Figure 1). At home, therefore, cooking has unquestionably become women's work. Since solar ovens need regular attention: opening, closing, turning and so on, the success of the project depends largely on women staying at home. This poses the question: even though this technology is supported by the existing norms within the Lombok society, should the technology be promoted when it inhibits change towards the more global trends associated with women's opportunities for work outside the home?

With men playing little or no part in cooking, the involvement of women in the manufacturing process is imperative, even though construction of that kind generally falls into the realm of 'men's work' (Figure 2). Regency officials addressed this by targeting women's groups, which resulted in a good gender mix. Local government workers and university undergraduates working beside us was intended to both create and strengthen a sense of ownership and technical understanding within the wider community.

At this stage, the starting point, we were all left with simple questions and a book of technical drawing to puzzle over. How can you make an oven using only local materials costing about $25 (US) and simple tools? How do you get two solar ovens out of three pieces of plywood, four pieces of glass, two mirrors and some aluminium? How do four people, speaking different languages, get on with this task together?

Five days of measuring, sawing, puzzling, glueing, nailing, re-measuring, sweating and sometimes getting a little irritable, increased our creative skills (Figure 3). Essentially, we were building a small box-shaped wooden glasshouse and using a moveable mirror placed inside the lid to reflect sunlight into a U-shaped oven area. The lining, made of aluminium, sprayed black to be more absorbent, was surrounded by cavities insulated with cotton fibres collected from the pods of local trees. This is the fourth generation of oven, and at 70 cm square, 33 cm deep and 17 kg in weight, it is small enough to be wheeled about, yet large enough to provide for a family's needs. Once completed, a day of field-testing ensued. The ovens were taken outside at 8.00 am and by 10.00 am a temperature of 100°C was reached. By mid-day temperatures of almost 200°C were recorded; and that level of heat was maintained for almost four hours (Figure 4). 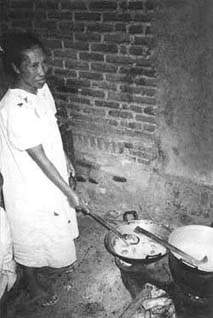 Figure 2: Woman always do the cooking

For this technology, as the saying goes, the 'proof of the pudding is in the eating'; and a final day of field-testing, using different foods, put the cookers to a real test. There proved to be enough solar radiation and insulation to use each oven for at least four consecutive episodes of cooking; not so much a food tasting, in store then, more a feast! It is one thing to raise public awareness, but providing food of this quality is really convincing.

Both the dissemination of information and the popularization of the overall idea were given priority throughout. During the manufacturing process, teenage school-children and some undergraduates, using worksheets, were encouraged to investigate the mechanics of the oven, and to take the opportunity to practice their English language skills.

It is people who already own solar cookers who are the most effective way of disseminating the concept. We realised that none of our co-workers was from the poorest in society like those working in the traditional villages or collecting seaweed from along the seashore. Dissemination of ideas and the fostering of technology is probably far more effective when it starts off with groups that have some money and education. Ultimately, the hope must be that if solar ovens become more widely available, then they should reach those most in need: the seaweed pickers who earn pennies and the potters and weavers in remote villages who earn little more. 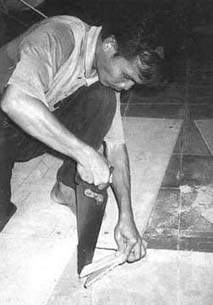 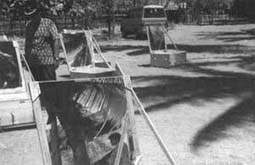 At the end of the project, travelling west toward the capital, Mataram, we visited earlier recipients, assessing how much they used the older ovens (which have an estimated five-year life span) and how effective they are. It was difficult to judge, as we felt that the recipients were concerned that the solar cookers would be taken away if they were not being used for cooking. However, when we found, for example, that the mirror was removed for use in the bathroom or the cabinet had been transformed, through inactivity, into a small table, the situation was clear. In these cases, the non-user was too busy at a place of work outside the home for this technology to work, and found it easier and presumably, affordable, to buy bottles of fuel for a more modern stove. The overall impression, however, was that the project is worthy of support.

Perhaps there are lessons that can be learned from history. In looking to the future, politicians would do well to remember that there are three vital elements that together can transform a nation: people, machines, and money. Lombok proved that a large number of people are willing - two out of three so far - that the machines can be built, but that a financial revolution of investment is necessary if this technology is to make the crucial leap that will make any real difference.