Solar power is usually defined as the supply of energy directly from the sun. It is made up of two very distinct technologies, solar thermal and solar electricity. The first is based on the principal of using the sun's direct heat energy and is most commonly used for supplying hot water for houses and swimming pools. However, it is solar electricity with which this article concerns itself. This is a technology where the light from the sun is converted into electricity: this process is known as solar photovoltaics. 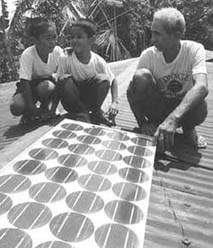 The past and present

Despite its rise to prominence in the 1980s and 1990s, this industry can trace its origins back 150 years. The actual photovoltaic effect was first noted over 150 years ago by Professor Becquerel, but further practical application of his work had to wait until the rapid growth of the space programme during the late 1950s. From there the industry has developed at a great speed.

During the mid to late 1970s, major improvements in material processing techniques resulted in cheaper, more efficient solar cells. At the same time, the power needed by telecommunications systems decreased, making solar power viable. There was also a sudden major rise in conventional fossil fuel prices, and the realisation that one day they would run out. This gave a fresh impetus to the research and technology being undertaken in this area.

As further improvements in cell processing continued throughout the late 1970s and early 1980s, cells have become less expensive, thus making them more appropriate for an increasing range of applications.

How does a cell work

At its simplest, the solar cell works like a diode (or one-way gate through which electricity can pass). Silicon is intensely refined to remove all the unwanted impurities. Half is then doped (treated) with boron, which has excess positive electrons, and half is treated with phosphorous, which has excess negative electrons. When light photons hit the cells, this results in the movement of electrons between the boron-doped and phosphorous-doped silicon (exactly as a P-N junction diode). This is collected as electricity by a metal backplate and grid on the cell.

Silicon (in its many forms) is the second most abundant element on earth, most well known as sand. As it is readily available and produces a lot of electricity for the amount of available light, it is the major raw material for the industry. As cells are the most expensive component of a solar system, they hold the secret of increased energy conversion efficiency of sunlight into electricity and at the same time improving manufacturing costs.

To withstand the harsh environmental conditions under which they operate, the cells are laminated between a layer of special high transmission glass and weatherproof plastic layer. Each silicon cell is able to produce about 0.6V DC, so usually 32-36 cells are packaged as a solar module, measuring typically 1.2m x 0.6m, which can give nominally 12V DC and 75 watts under standard test conditions. These test conditions are 1000W/m £ insolation (light), temperature 25°C and air mass 1.5 (the latter refers to the different light spectrum which mimics the sun overhead at mid-day)

Despite some subtle variations in definition and terminology over the years, photovoltaics has now:

· Established itself as an appropriate technology for use in developing countries.
· Demonstrated developmental benefits when used successfully.
· Proved it can meet real local needs.
· Demonstrated how industries can co-operate at global and local levels for the benefit of all.
· Offered potential environmental benefits. 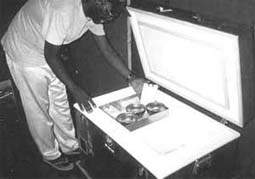 Whilst there is undoubtedly a significant amount of goodwill from donor agencies on the future implementation of PV technology, take-up remains sluggish - perhaps because, until recently, there have been many inappropriate modes of operation. However, there are some excellent examples of PV projects. The following examples provide excellent illustrations as to how rural infrastructure projects can be successfully implemented. 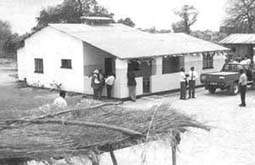 After decades of relying on candles and gas lamps for lights, and on hand pumps for their water supply, the people of Barangay Sulangan in Guiuan, Eastern Samar finally have electricity and water supply systems powered by solar energy.

AusAID First Secretary Chan said 'The solar-powered systems are part of a four-year Municipal Solar Infrastructure Project (MSIP)'. The project started in 1997 and will cost US$28 million-million. Aimed at providing solar power for community water systems, elementary schools, barangay (local community) health stations, barangay halls, and communal lights. MSIP is a project of the Department of Interior and Local Government which is supported by the Australian government through a soft loan (i.e. one which is below the commercial rate). The beneficiaries are residents of barangays that do not have access to grid electricity now and who do not expect to have it in the next seven years.

The project is installing 1003 packaged photovoltaic solar systems in 370 barangays covering 49 towns in the Visayas and Mindanao regions, including 18 municipalities in Eastern Samar.

Thirty-nine out of 60 barangays in Guiuan will have a total of 128 solar-powered systems; four have been installed in Barangay Sulangan, and these will benefit 670 households with 4700 people.

The MSIP, with BP Solar Australia as managing contractor, is the largest project of its type in the world. It represents a major investment for the governments of the Philippines and Australia in an environmentally-friendly technology with enormous potential for application in poor remote rural communities.

'The MSIP is a community-based project,' said AusAID First Secretary Chan. The governments of Australia and the Philippines have involved the barangay residents by training them to manage the project themselves, especially in the care and maintenance of solar batteries and setting aside funds for maintenance to ensure sustainability. This is the aim of the development co-operation between Australia and the Philippines - to achieve poverty reduction through sustainable development.'

Immunisation is the most effective tool in the fight against diseases such as measles, whooping cough, polio, tetanus, yellow fever and tuberculosis. Immunisation requires the use of vaccines, which need to be kept under controlled temperature conditions -typically of between 0-8°C - from their production to their time of use. The transportation and storage of refrigerated vaccines, known as the Cold Chain, is a major challenge to health authorities. For many years, the World Health Organisation (WHO) and UNICEF have been carrying out a worldwide expanded programme of immunisation (EPI).

Prior to the advent of solar power, kerosene and bottled gas refrigerators were commonly used in rural areas to keep vaccines at the correct temperature. However, developing countries experienced operating difficulties, due to the short life-time of equipment, the need for constant maintenance and spares and the continuous need for uncontaminated fuel to operate them. EPI policy is to phase out the use of kerosene refrigerators for vaccine storage.

Solar offers a far more reliable power system, reduced maintenance, lower operating costs, longer life and hence a more effective and sustainable cold chain. Moreover, solar is cost effective in terms of the number of vaccine doses per dollar of outlay, even though the capital cost may be higher.

As part of the Zambian Ministry of Health's country-wide rural health rehabilitation programme, the European Union, via the European Development Fund, provided the necessary financial support to supply and install 200 solar vaccine and refrigeration systems, at separate locations throughout Zambia.

The Ministry of Health had previous good experience with such systems in the Western Province, and hence opted for solar technology at these new sites, discussing the various possibilities with the local PV industry along the way.

The whole project was brought to a successful close during 1997.

As a case history there are several critical success factors worthy of note:

· The project was based first and foremost on local need.

· The project targeted the involvement of the local PV industry as key to its success and sustainability, and involved it from the outset.

· The project used generic but entirely appropriate (WHO approved) standards for equipment, that ensured a level playing field for the bidders.

· Information was transparent and logical, ensuring that this was both impartial and useful.

Our experience is sufficient to offer some guidelines on an approach to projects of this sort. Specifically we would suggest the following:

· Real funds must exist for projects; our experience is that they need to combine grant funding and soft loan packages.

· The proposed new World Bank/Global Environmental Fund Clean Development Mechanism must be responsive and transparent in organisation. It must stimulate real activity and be able to demonstrate tangible use of funds.

· It must incorporate significant local involvement.

· It must involve the industry at both local and global levels.

· It will probably need to operate completely independently.

Successful programmes of this type will create the potential of solar power to act as a powerful agent for social welfare and will allow the world's solar companies to deliver what is so earnestly desired - low-cost solar power, accessible to all.

Those governments, with the vision to develop supportive and well-integrated overseas aid programmes, will greatly enhance the competitive position of their domestic photovoltaic industry and will improve their share of world trade in solar products.

Solar cells, the present and the future - 'Chemistry In Industry' Mark Hammonds June 1998