While the availability of wood charcoal at affordable prices is on the decline, there are very large quantities of agricultural wastes that can be converted into charred briquettes for use in a stove. Three models of available charcoal stoves were studied to determine their efficiency, using the standard water boiling test.

Three important observations emerged which have a direct effect on the heat given to the cooking pot, thereby affecting its efficiency.

The fuel burning rate, power output and heat losses from various models of cooking stoves were evaluated by standard water boiling test. It was observed that the poor efficiency of these stoves was due to convection of air along the outer sides of the burning chamber and direct radiation of heat to the surroundings. In the new design of charcoal stove, proper selection of perforated mild steel sheets for controlling the quantity of air entering the burning bed of charcoal and directing the hot gases towards the bottom of the cooking pot contributes to quicker heating resulting in higher efficiency.

The charcoal stove shown schematically in Figure 1 consists of two concentric mild steel grates with small holes supported on a grill made of 6 mm diameter mild steel rods. It has an overall diameter of 230 mm and is 160 mm in height. Charcoal/briquettes weighing 450-500 gms, adequate for about one hour of cooking, can be fed in the annular space between the grates. It is ignited from below, using rags dipped in kerosene or other suitable oil. The charcoal/briquettes ignite easily and the stove is ready for cooking in about ten minutes.

Radiation and convection losses to the surroundings have been reduced to a considerable extent by enclosing the burning bed with two concentric aluminium reflectors between which is an insulating layer of asbestos cloth of 3-5 mm thickness, rivetted firmly, Figures 2 and 3. 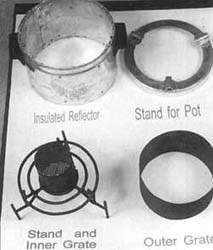 The stove performs well with charcoal as well as the briquettes made of charred agricultural crop residues. The stove has been found to give steady heat output Table 1 with consistently high percentage heat utilization of 25%. The estimated cost of the improved stove is Rs. 130/- per stove.

The authors would like to thank the Director, Central Institute of Agricultural Engineering, Bhopal, for his encouragement, guidance and providing facilities for the development of the stove. 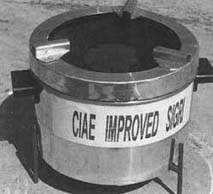