A survey of the eating habits and cooking practices of small families (4-5 members) in rural and tribal regions of India has revealed significant differences. In India, the phrase 'tribal people' or, in Hindi, Adivasi (or 'ancient race') is used to describe those communities who live in isolated pockets of forests and valleys. They dwell in widely scattered groups, preferring to enjoy centuries-old customs and rituals, rather than adopting urban ways of living.

Rural women, with basic educational backgrounds, are aware of the importance of fuel conservation and pollution-free kitchens. They therefore adopt improved cooking which can heat two pots at a time (Figure 1). Tribal women, on the other hand, are unaware of fuel conservation, but nevertheless accept improved cooking stoves if they want to vent smoke from their kitchens. However, because of their meagre cooking needs, they normally prefer a stove with a single pot hole (Figure 2). To account for these varied cooking practices, the technical back-up unit at Udaipur, Rajasthan, India under a national programme of improved cook-stoves, has designed and developed two different types of improved stoves to fulfil the needs of both rural and tribal families.

The correct formulation of clay/fibre mix is used to form a firm block from which the stove body is carved out as shown in the figures.

Each type of stove is provided with a chimney pipe and cowl at its upper end. This flue emits products of combustion from the stove, draws primary air into the fire box, stabilizes air flow, and prevents rainwater entry into the stove. The passages formed within the stove are lined with pottery or other heat resistant material, in order to retain the stove geometry, even after repeated repairs. The chimney pipe may be made up of smaller pipe lengths, made of pottery, or a single length of other suitable material. The cowl may be made of metal or of pottery.

This stove works with a thermal efficiency of 22% when the fuel burning rate is 1 kg/hour. The fuel used is sun-dried acacia nillotica wood, which has a calorific value of 3700 Kcal/kg. Small pieces of wood of 4-5 cm diameter, and 20-25 cm long, are burnt during a two-hour water-boiling test.

The flue passage between the fire box and the inlet of the chimney pipe is curved which lowers the flow velocity of the fuel gases. This results in an increase in the quantity of heat transmitted to the pot by the hot gases, which helps to optimize heat transfer to the cooking pot, which fits snugly on the seat of the stove.

An opening is provided at the junction of the curve and the chimney inlet for the removal of residues when cleaning is undertaken. The opening is kept covered with a piece of brick when the stove is in use. 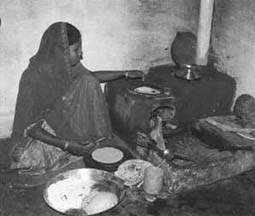 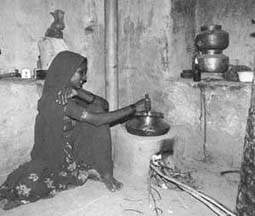 The stove, when given an outer finish, as per the design, is attractive in appearance (Figure 3). The dimensional details are given in the schematic drawing and isometric views shown in Figures 4 & 5. 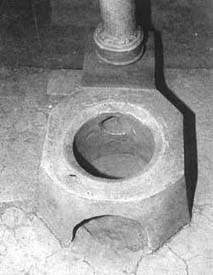 This stove works at a thermal efficiency of 24% under similar conditions to that of the single-pot stove.

The flue passage between the fire box and the chimney inlet consists of an upwardly inclined hole (first tunnel) which leads to a second pot seat which has a shallow bottom. From this pot seat there is a smaller downward hole (chimney tunnel) shown in Figures 6 & 7. The first tunnel transfers heat from the fire box to the second pot while the chimney tunnel directs the flue gases downwards to reach the chimney inlet. The downward inclination creates impedance to gaseous flow, thus optimizing the heat delivered to the pots which are a close fit on their seats.

The first pot, set directly above the fire-box, does the primary cooking, while the second pot, receiving sufficient heat from the fire box, is used to prepare other dishes simultaneously (Figure 8).

The single-pot cooking stove is simple to construct and maintain and has been propagated widely in the tribal belt of Rajasthan. It has also been found suitable for other families who prefer single-pot cooking.

The two-pot stove, although it needs more maintenance to keep it properly functional, provides effective fuel-saving and reduces the level of pollution in the kitchen. The stove has been propagated and accepted in rural areas of many states in India. 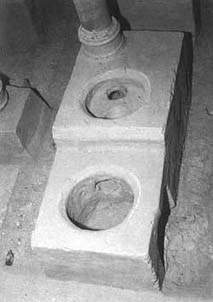