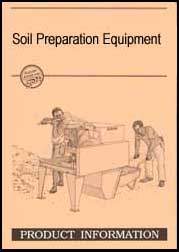 The Heuser LZM is a horizontal shaft mixer designed for easy feeding and discharging, and is suitable for mixing dry soils as well as wet, clay-rich mixes.

The mixing drum and shaft, which have special large-sized ball bearings, are equipped with 6 plough-shaped blades to ensure thorough mixing of the soil and additives.

The machine is driven by a 3 kW electric motor with a special gear system, while the tilting ofthe drum to discharge the mix is done manual] with the help of a hand wheel.

For transportation to and manouvering around the building site, the machine is equipped with 4 wheels, which can turn in all direction Pneumatic tyres can also be supplied on request. For a rigid and horizontal positioning of the mixer, 4 stabilizing and levelling jacks are provided

A large wheeled tray to transport the discharged mix is supplied as part of the machine.

A special feeding hopper (not shown in the picture) is also supplied with the machine as a security measure. It is fixed independently on top of the drum, that is, it stays in place when the drum is tilted down. When the sides of the hopper are folded up to facilitate loading, the mixer is automatically switched off to avoid accidents. However, when the hopper is closed and the mixer in operation, it is still possible to fill in water, sand etc through the metal screen.

Earth, sand, stabilizer and/or other materials together with water can be filled into the mixer, either at standstill through the open feeding hopper, or through the screen, with the hopper closed and the mixer in operation.

After the mixing is completed, the mixer is switched off and the opening of the drum fumed down to empty the contents onto the wheeled tray below. It is also possible to secure the drum in this position and turn on the mixer manually (security switch) to facilitate discharge of the mix.