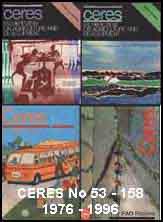 I would like to comment on two points raised in the article "The brutal economics of tobacco growing" (ceres No. 66, p. 11-12).

In arguing that governments obtain significant revenue from tobacco consumption, the author ignores and contradicts his earlier statements about the harmful effects on health caused by smoking It is estimated that national expenditure on medical care for smokers, and the money foregone in lost working days as the result of smoking related illnesses, is enormous. It is likely that in most countries the amount is far in excess of any "significant revenue "obtained by national exchequers in the form of tobacco taxation.

The other point concerns the final paragraph of the article, in which the question, "Is there really no choice except cancer or starvation?" is posed. It is essential that the small tobacco farmers are exposed, however mildly, to the changing world demand for the crop. As long as there is a demand for the raw material by tobacco companies, the peasant farmers will undoubtedly continue to supply it. It is highly unlikely that anyone will "come preaching to him" to give up cultivating the crop as the article states. But as, hopefully, tobacco consumption the world over declines with a consequent fail in the world demand for the raw material, the small farmers should be encouraged by, among other things, more realistic pricing policies, to concentrate on the production of local food crops. Although this may, on the one hand, reduce foreign exchange earnings from tobacco sales, as the article states, it will on the other hand save considerable foreign exchange expenditures on imported basic foodstuffs (at present imposing a considerable burden on many LDC economies), and lessen economic dependence on volatile world markets.

The solution needn't "involve sacrifices" as your correspondent writes; what it does involve is a considerable national mobilization to assist and encourage farmers to grow badly needed food crops as an alternative to what is a fundamentally harmful crop - tobacco.

We regularly read ceres and find it a tightly written and edited publication almost always germane to a large number of fundamental development issues. Your staff deserves congratulations for this continuing effort.