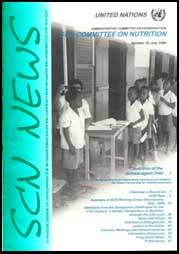 Update, on aGN activities and Discussions

The AGN met at the SCN's 25th Session, held in Oslo, Norway in March 1998. During the latter half of 1997, the AGN undertook assessment missions to two countries (Zimbabwe, Bangladesh) to look at coordination at country level. This work was highlighted as being important to the SCN in fulfilling its mission to harmonise and enhance the effectiveness of food and nutrition programmes.

The AGN members found that while there was good cooperation and information sharing between UN agencies, coordinated action tended to occur on an ad hoc basis and usually as a result of strong leadership by certain individuals, rather than because of a formal institutional policy. Coordinated actions between UN agencies were found to be most effective in response to acute emergency situations such as famine or civil strife.

The lack of intersectoral coordination of action, follow-up to plans of action, and programme implementation at the country level was reflected in the words of one national planner;

On a positive note, the process of thematic planning, led by UNDP (see SCN News No.15 p43) was seen to offer some promise for greater coordination and interaction at the country level. Furthermore, future visits by AGN members will focus on countries with successful experiences in country level coordination, and it is intended that during such visits, AGN members will help with strengthening interagency work and catalysing coordination.

Other activities and discussions:

· The AGN recently addressed the question of using food balance sheets (FBS) to determine the micronutrient content of food supplies. They concluded that this is potentially very useful and should be explored further, however at present, using the FBS to calculate figures for micronutrient availability is premature.

· In considering what actions are necessary to reduce malnutrition globally, the AGN is examining the current activities of the UN lead agencies, and reviewing key agency documents to identify successful approaches.

· The AGN will provide advice to the SCN Secretariat in a project aimed at comparing different methods of anthropometric data analysis being used to estimate malnutrition in young children, with the purpose of defining the best approach to use in future analyses.

· In recent discussions of the role of multiple vitamin and mineral supplementation in maternal nutrition, the AGN concluded that early trials of supplementation in pregnancy should be closely monitored to evaluate any adverse effects. In addition, more research is needed on the effectiveness of generalised medicinal supplementation before this practice can be recommended for adoption at the community level. The need for controlled randomised clinical trials with large numbers of subjects is considered necessary before multinutrient supplementation is considered at the policy level.

A copy of the full AGN report, 'Report of the Meeting of the Advisory Group on Nutrition at the Twenty-Fifth Session of the Sub-Committee on Nutrition, Oslo, Norway, 26 March 1998, is available on request from the ACC/SCN Secretariat, c/o WHO, 20 Avenue Appia, CH-1211 Geneva 27, Switzerland. Fax: 41 22 798 8891 Email: accscn@who.ch