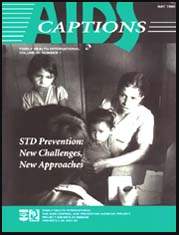 The global effort to stem the spread of HIV infection is arguably the most comprehensive, coordinated and costly response to a sexually transmitted infection in modern history. By contrast, the “global” effort to prevent and control the myriad of other sexually transmitted diseases (STDs) that have a disproportionate impact on women and their infants is remarkably small.

The HIV/AIDS epidemic has provided a number of opportunities to indirectly address other STDs. A dialogue about diseases that are sexually transmitted has begun and the infrastructure for the delivery of HIV/AIDS services, which can and is being used to deliver STD services, has been strengthened. Since the behaviors involved in sexual transmission are the same, effective behavioral interventions for HIV infection are having an effect on transmission of other STDs.' The male condom has been distributed and promoted: correct and consistent use of this device prevents HIV infection and gonorrhea and offers partial protection from some other STDs. And finally, as epidemiological data have accumulated linking other STDs to increased risk of HIV infection, programs to control STDs are being strengthened.

However, because of or in spite of the HIV/AIDS epidemic, we have not managed to convince the world of the importance of other STDs, in and of themselves, and their impact on the health of women and infants. Gonorrhea, chlamydial infection, trichomoniasis, genital herpes, syphilis and human papillomavirus (HPV) infections cause infertility, cervical cancer and adverse outcomes of pregnancy, such as spontaneous abortion, prematurity and stillbirth. The morbidity, mortality and health care costs associated with these STDs are both enormous and underappreciated.

Most people are surprised to learn that HIV infection is not the only fatal STD. In 1996, 250,000 women worldwide will die of cervical cancer caused by HPV infection-considerably more than from AIDS. As a result of pelvic inflammatory disease, a frequent complication of gonorrhea or chlamydial infection, deaths due to ectopic pregnancy are extremely common in resource-limited settings in both the developed and developing world. Congenital syphilis, neonatal herpes infections and chlamydial respiratory infections, to name just a few, threaten the health and well-being of newborns.

Although surveillance data are not available in many countries, selected studies give some insight into the magnitude of the disease burden caused by sexually transmitted pathogens. For example, in an ongoing study in Uganda's Rakai District, over 53 percent of the women had at least one STD (see table “Preliminary STD Prevalence Estimates for Reproductive-Age Women (15-49 years old) In the Rakai District of Uganda”). If these data are representative of other areas in the developing world where similar socioeconomic pressures and health care limitations prevail, our current estimates of disease burden are probably conservative.

A number of biological factors contribute to the increased susceptibility of women to sexually transmitted infection and disease. First, the volume of male ejaculate, which is deposited directly onto the vulnerable cervical tissues, is often much larger than cervical and vaginal secretions. One exposure is sufficient to transmit gonorrhea or chlamydial infection.

In addition, the reproductive tract of women is biologically engineered to permit two-way “traffic.” 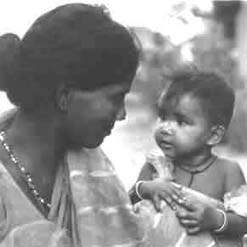 A mother and child in Orissa State, India. Too little attention is paid to the impact of STDs other than HIV/AIDS on the health of women and children. (Vilas/UNICEF/5865)

For example, sperm, the mucus of the fallopian tubes, the fluids of menses, and the fetus move up and down the tract. Physiological barriers impede the movement of harmful bacteria, viruses and protozoa, but these are imperfect.

Once an infection has been established, the anatomy of the female reproductive tract precludes ready visualization of damaged tissue. In the developed world, where pelvic examination, laparoscopy and other invasive procedures are common, this constraint can be overcome. However, these procedures are not available in the resource-limited settings that service the populations with the greatest disease burden. What's more, if these procedures are not done with the proper technique, they can result in iatrogenic transmission of infection.

The nature of the relationship between the female host and sexually transmitted pathogens is such that the infections often cause no symptoms or such mild ones that women do not seek health care. So, even if diagnostic procedures and therapy were available, many women would not have sufficient reason to seek them.

Biological factors also make it easy for women to pass on sexually transmitted infections to their unborn children. During the nine months of gestation there is ample opportunity for a pathogen to infect a fetus. In addition, even if it does not require an invasive procedure, the birth process involves exposure to blood, secretions and tissue that can harbor pathogens.

Biologically, women are particularly susceptible to sexually transmitted infections; social, cultural and economic factors often increase their risk of exposure to these infections. In many parts of the world, women's economic and social dependence on men makes it difficult for them to avoid high-risk sex or to negotiate condom use with their partners. Cultural expectations that reinforce ignorance about sexual matters increase the likelihood that women will fail to recognize STD symptoms or avoid seeking treatment for STD.

Currently the options for primary prevention are abstinence (for HIV and other STDs) or correct and consistent condom use (for HIV and gonorrhea). Since neither choice is compatible with conception, during the reproductive years women and their partners must choose between bearing children and risking infection. Without effective vaccines and noncontraceptive topical microbicides, this biological challenge has no obvious solution.

In the absence of appropriate tools to prevent acquisition of STDs, early diagnosis and treatment become critical parts of a prevention and control program. Effective strategies for early diagnosis and treatment of STDs are ideally based on rapid, inexpensive diagnostic tests that are appropriately sensitive and specific and on effective, affordable single-dose oral therapy. Such diagnostic tests do not exist. What's more, in resource-limited settings, effective treatment is often unavailable.

Ironically, for women who have no symptoms or symptoms that are not severe enough to prompt care-seeking, the availability of diagnostic tests is a moot point. There is an urgent need for inexpensive screening tests for women who report subtle symptoms, acquisition of new partners, risky behavior or suspected risky behavior of their partners. These tests would be used as an indication that confirmatory diagnosis and therapy were needed or, in high prevalence settings, as an indication for treatment.

In the meantime, in resource-limited settings health care providers may have limited to no diagnostic capabilities and must rely on syndromic management (see chapter “Syndromic Management: Promoting Effective STD Diagnosis in Resource-Poor Settings”). Unfortunately, this approach is less effective in women than men because of the paucity of clinical signs and symptoms and their lack of specificity.

By enabling providers to diagnose and treat men, syndromic management can play a role in preventing disease in women. However, the opportunity for symptomatic men who seek and receive STD services to notify their partners and refer them for treatment is all too often overlooked. Obviously these untreated women become sources of reinfection for their partners, but even more important, they are the victims of long-term complications.

Single-dose, oral therapies that are effective and inexpensive are essential to effective secondary prevention of STDs. Expecting people to comply with multi-dose treatments, especially in the face of asymptomatic infections that require seven days of twice-daily therapy, is a prescription for treatment failure and antibiotic resistance.

The advent of drugs such as azythromycin and ciprofloxacin is a breakthrough for STD control programs because they allow providers to administer single-dose therapy. Drugs such as cefixime that are known to be safe for use during pregnancy are critically important for preventing adverse outcomes of pregnancy due to STD. Although these drugs cost several dollars per dose when purchased in the developing world-arguably more than tetracycline-for the most part we have not addressed whether we can afford them because their use has not been evaluated formally with cost-benefit, cost-effectiveness analyses.

Tertiary prevention, or prevention of STD complications such as infertility and adverse pregnancy outcomes, is inextricably linked to secondary prevention. The potential impact of this approach was demonstrated recently in Seattle, Washington, where investigators used urine-based screening of women at risk for chlamydial infection to show that screening, case-finding and treatment are likely to reduce pelvic inflammatory disease.

Two studies are in progress that may support STD interventions early in pregnancy. One is examining the impact of STD mass treatment on pregnancy in a complementary mother/infant study in Uganda's Rakai District. The other, a U.S. study, is looking at the effect of therapy for bacterial vaginosis and trichomoniasis early in pregnancy.

Although pap smear screening and surgical interventions have been very effective strategies for cervical cancer prevention in the developed world, the technical nature of the procedures and their expense preclude widespread use. As we learn more about the manifestations of infection by high-risk types of HPV, a simpler, less expensive strategy should emerge: 1) primary screening to determine whether a woman is infected with any type of HPV; 2) secondary screening of HPV-infected women to identify those infected with high-risk types; followed by 3) tertiary pap smear screening from a sample collected with a self-administered vaginal swab or tampon. For women with high-grade cervical lesions, referral to a regional facility for pelvic examination and treatment would be appropriate. Such a system of triage awaits technical advances, implementation, and cost-benefit and cost-effectiveness analysis. 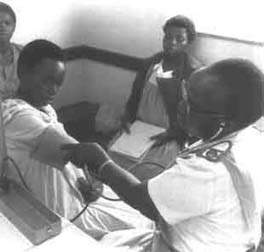 Taking a client's blood pressure in an antenatal clinic in Zimbabwe. Rigorous evaluation is needed to determine whether STD diagnosis and treatment should be integrated into other health care services for women. (Schytte/UNICEF/4998)

We are rapidly moving in the direction of combining reproductive health services. However, there is a paucity of data on the impact of integrating STD, HIV and family planning services into comprehensive reproductive health programs. From a biological perspective it makes sense to combine these efforts given the complex interrelationships between the diseases and pregnancy planning/prevention. Whether integration makes sense from the perspective of the user needs to be formally evaluated using rigorous methodology, including evaluation outcome measures.

HIV infection, which can arguably be viewed as a complication of untreated ulcerative and nonulcerative STDs, clearly can be addressed at the level of secondary STD prevention. When the cost-benefits of preventing HIV as well as infertility and adverse pregnancy outcomes are taken into account, the rationale for supporting STD research and prevention programs becomes compelling.

For those who continue to work in STD research and service delivery programs, there is a sense that we are at a crossroads of some sort. Recent results from Tanzania suggest that STD treatment as an HIV prevention intervention may be more effective than anyone imagined (see chapter “Study Confirms Value of STD Treatment in Curbing HIV Transmission”) Meanwhile, the results of the Rakai study are awaited-not only to show that the STD treatment effect can be reproduced, but also to demonstrate the correlation between decreased point prevalence of STDs and reduced sero-incidence of HIV infection. In addition, the Rakai study will tell us what is to be gained by treating asymptomatic infections (the majority of cases) and what secondary effects might be seen on reproductive health in terms of healthy babies.

On the other hand, a recent report by the U.S. National Institutes of Health shows that few research resources have been spent, aside from vaccine development, for HIV prevention. The report simultaneously echoes concerns that AIDS resources are being spent on non-AIDS research. This leaves us with the unanswered question: Will we have the scientific commitment and the political and social strength to move forward with an STD prevention strategy that is aimed indirectly at HIV?

As we wait for the answer, it may be appropriate to articulate some of the important lessons of the HIV/AIDS epidemic:

· The opportunity for a new disease to emerge and be transmitted by “old” behaviors is ever-present.

· If we cannot prevent other sexually transmitted diseases, we may not be able to prevent HIV infection.

Penelope J. Hitchcock, MD, is chief of the Sexually Transmitted Diseases Branch of the National Institute for Allergy and Infectious Diseases.