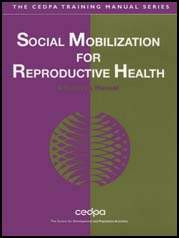 The International Conference on Population and Development (ICPD), held in Cairo in 1994, gave new importance to broad issues of people's participation, human rights, democracy, and gender in an area once focused largely on service delivery. In the Cairo Programme of Action, 183 nations agreed to work toward improving the reproductive health of men and women in their countries.

The dramatic and widespread changes in behavior, policy, and resource allocation that the Programme anticipates require concerted efforts and action among many segments of society. Social mobilization efforts (e.g., Gandhi's grassroots movement in India, the international women's movement, the anti-apartheid campaign in South Africa, the worldwide environmental movement) have set precedents in recent history that resulted in major shifts in societal norms, policies, and laws. This manual promotes the belief that social change is one of the prerequisites for sustainable positive reproductive health practices as envisioned in the Cairo Programme of Action, whether related to rights or service delivery.

For the Centre for Development and Population Activities (CEDPA), social mobilization involves planned actions and processes to reach, influence, and involve all relevant segments of society across all sectors from the national to the community level, in order to create an enabling environment and effect positive behavior and social change. Social mobilization is a dynamic, long-term process in which stakeholders may move from one issue to the next, building on what they accomplish and what they learn to make sustainable changes in society.

This manual promotes social mobilization as a means for communities to declare publicly their rights to control their reproductive health and to create widespread support for those rights. Social mobilization creates the enabling environment, as well as the vehicle for broad-based change to occur. Village women in Senegal, who originally came together in a literacy class, mobilized successfully against laws permitting female genital cutting in their country. Women across Nigeria have mobilized for better health, greater rights, and more services, supporting one another through the 100 Women's Group initiative.

The spark that ignites the process of social mobilization - the original catalyst for change - can come from the grassroots or the national level. The important thing is that this catalyst - an individual, a group of individuals, or an institution - facilitates a process in which ultimately power is shared with a wider, more diverse group of stakeholders. For genuine change to occur, it is important that those most directly affected by the change be integrally involved in the process of determining the nature of the change.

Social mobilization embraces other behavior change strategies and skills including advocacy, community mobilization, social marketing, and behavior change communication. All of these strategies can be used in a social mobilization movement to promote conscientization (a state of critical consciousness as defined by the Brazilian educator Paulo Freire) and ultimately link the hands of those having less power, voice, and resources with those who have more. The process is not adversarial. It is collaborative. It is about transformation. It is about fostering momentum for positive change in support of gender equity, as well as reproductive and human rights.

The building blocks of social mobilization include the following:

COMMUNITY MOBILIZATION uses deliberate, participatory processes to involve local institutions, local leaders, community groups, and members of the community to organize for collective action toward a common purpose. Community mobilization is characterized by respect for the community and its needs.

ADVOCACY is a process that involves a series of actions conducted by organized citizens in order to transform power relationships. The purpose of advocacy is to achieve specific policy changes, program changes, or allocation of resources that benefit the population involved in this process. These changes can take place in the public or the private sector. Effective advocacy is conducted according to a strategic plan and within a reasonable time frame.

· Audience participation
· Recognition of behavior change as a social, individual, and community process
· Use of mass and multimedia
· Development of entertainment for educational purposes

SOCIAL MARKETING promotes and sells products, ideas, or services that are considered to have social value, using a variety of outlets and marketing approaches. Social marketing may not always be a component of social mobilization. Population Services International (PSI) defines social marketing as the distribution of needed health products to lower-income persons by marketing through the existing local commercial and NGO infrastructures and by motivating healthy behavior.

A single workshop is not enough to deal with the complexity of social change. This workshop is designed to give nongovernmental organization (NGO) managers and planners an introductory framework and key skills for undertaking social mobilization for reproductive health. It assumes that participants come to the workshop with experience and skills in related areas and that they will leave with more refined skills, greater understanding, and a network of associates, all committed to making a difference in the world. It also assumes that as international mobilization on reproductive health gains momentum, what is learned in these efforts will perpetuate and enhance the theoretical basis, guidelines, and skills described in this manual.