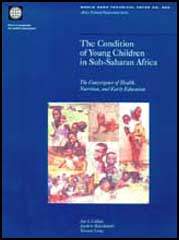 Evidence suggest that investing in human capital, especially in early development, also attacks some of the most intractable causes of poverty. A large part of cognitive achievement differentials between lower and higher socioeconomic groups can be attributed to the malnutrition, poor health due to the lack of sanitation, and low levels of psychological stimulation in childhood. All of these factors can be positively affected by education. Early child development interventions can help reduce social inequalities rooted in poverty by helping to provide young children from disadvantaged backgrounds with a more equitable or 'fair' start in life and a foundation for further schooling. ECD programs can help compensate for historic inequities transmitted intergenerationally in poor households.

In South Africa, for example, the average monthly household income for whites in 1991 was R4679, (US $1023) more than four times larger than that of the black African households. Studies show that within the education systems for black Africans, repetition and drop-out rates contrast sharply with statistics from the education systems for whites. One recent study shows that white people are seven times more likely to be literate than the black in South Africa (Fuller and others 1995). Early childhood programs are essential to help reduce such stark inequity between black and white Africans by providing disadvantaged children with proper health care, nutrition, and education, which their families are not able to provide. South Africa has recognized the importance of early intervention by making a "reception year" for 5-year olds a major point of their new education policy (African National Congress 1994). One of the new priorities for Social Welfare Policy is vulnerable children under 5 years of age. The "Flagship Program for unemployed women with 0-5 year olds" launched in 1996 will pilot programs which may be replicable on a larger scale (Box 7).

The advantages of early childhood intervention are especially apparent for girls. Differential treatment of girls begins early in many of the African cultures - female primary enrollment rates, for example. are less than 50 percent of those of boys in many Sub-Saharan African countries. Strategies to improve girls' participation include scholarships as well as attention to their readiness for primary school. Early childhood programs can be an important aid in helping to overcome discriminatory barriers and gender inequalities that already exist at the time of first entry into school.

Four issues emerge which require careful consideration in balancing center-based with home bred and other alternative delivery systems, e.g. health centers, women's organizations and extension systems. They are: (a) the large numbers and related unit costs involved in service delivery; (b) the ability to pay among the poor and most needy; (c) the quality of service; and (d) the effects of training and certification on differentiating, and sometimes discrediting, home-based caregivers from center-based workers. What is needed is a standards policy based on performance standards negotiated by all stakeholders. Such a process acknowledges prior learning and experience and non-formal training, while ensuring quality of care. Such particular issues, and the many others explicitly or implicitly raised in this paper, will certainly contribute to the growing ECD research agenda for Africa.

Box 7: What does the Literature from South Africa Suggest ?

A longitudinal study conducted in South Africa by Short and Biersteker (1984), followed lower-class children who participated in the pre-school program developed by the Early Learning Resource Unit (ELRU).

The study focused on the scholastic progress of children who attended the Athlone Early Learning Centre (ELC) between January 1972 and December 1974. Besides those attending the ELC, there were three other groups of children included in the study. These were 1) an 'unschooled' lower-class group from the same population as those attending the ELC; 2) a more middle-class group of children attending a pre-school in the same home ownership section of Athlone; and 3) a group of lower-class children from another township, also attending a preschool. The children from the ELC and the control group children were followed for 12 years. The study was done in 3 phases. Phase I consisted of the data collected on the children while they were in the preschool (1972--74). The second phase assessed children during the first year of primary school, with a focus on psychosocial behavior and language ability (1973-75.) In addition, school performance data were collected on the children through 1980. The third phase was undertaken in 1983-1984, when the children were in high school.

The results indicated that children who participated in the ELC program performed like the more middle-class children as a result of their preschool program, compensating for social class differences From the phase I study the authors concluded that: the ELC program helped to overcome the effects of disadvantaged socio-economic backgrounds, ensuring a basic level of school readiness (1984:23). Further, they concluded that as a group:

Ex-ELC (Early Learning Centre) pupils . . . were more likely to show 'creative inquisitiveness,' academic motivation, good socio-emotional adjustment and rapid adjustment to primary school than children from the same community who had not attended a preschool programme.

In the phase 11 tests, those who attended the ELC did better than non-preschool children suggests the robustness of the impact of the pre-school experience.

Phase 3, the longitudinal follow-up of the children focused on their scholastic achievement. This was a simple measurement of grade level achieved. What is remarkable is that it was possible to follow 88. percent of the original ELC sample. Unfortunately, the comparison group had far more attrition and, thus, the researchers felt there was no adequate group against which to compare the ELC children What they chose to do was to compare the ELC children with national cohort data.

What were the results? The drop-out rates were reduced All the ex-ELC pupils remained at school to age 12, by age 15, 95.2 percent were still in school and by age 17, 68.2 percent were still in school (1984:106). The comparable data for the national cohort would suggest the same rate of attendance at age 12, but significant differences occur at age 15 when only 57.8 percent are still in school; at age 17 there are only 18.1 percent in school (1984:73); thus, those who attended pre-school were more likely to remain in school for a longer period of time than their peers who did not have a pre-school experience.

Another hypothesized effect of pre-school education is a decrease in the repetition rate. Repetition rates, as calculated by the percentage of children who are on-grade for their age, were high for the total sample. However, they were lower for the ELC group than the national cohort. In the study sample, 67 percent of the 12 year olds were on-grade for their age (compared to 40 percent in the national cohort), 39.7 percent of those age 15 (19 percent comparatively), and 31.8 percent of the age 17 group (10 percent comparatively). For both groups repetition was most likely to occur at the end of SSA and again at Std 6 and 7. (9184:3).

An important variable identified in the study was socio-economic status (SES). Even within the ELC group, although they all came from the same neighborhood, there were SES differences, and this had an impact on children's school achievement. Those who attended the ELC could be divided into 3 groups (high, medium and low SES), with those in the high group coming from working class homes, with about one third of them below the poverty line when the children were at the ELC. Many of these were upwardly mobile and during the course of the study they moved out of Kewtown. The low group tended to include more families under stress. These sub-groups differed significantly in their school performance, despite the fact that they all attended the same pre-school programme. Those in the high and middle SES group scored significantly higher than national norms. And while those children in the lowest SES group performed better than the national average in terms of their scholastic progress. the differences were not significant.

In summarizing the entire study, the researchers note:

Overall, taking all available evidence into consideration, we feel that it is justifiable to conclude that participation in the ELC programme did have a lasting effect on the scholastic achievement of these disadvantaged children...We think that their results show considerably better progress throughout their school careers than could be expected for children of their socioeconomic background. Much more research is needed to confirm these findings, but we would hypothesize, on the basis of our own results and the American longitudinal studies, that the lasting effects of preschool education programs are most apparent in high school, and also that effects vary according to socio-economic background. (1984:59)

One of the criticisms of the studies that have come from the USA and the UK is that the quality of the pre school experience for young children is at such a high standard in these settings, that the transferability of research results to other countries is highly questionable. It is important to note that while the ELC program had a definite curriculum, the ELC teachers had much lower qualifications (Standard 8 + 2 years) and at least twice as many children to work with in the classrooms (a ratio of 1 :14) as their North American counterparts. Thus it can be concluded that it is possible to obtain a positive impact from less costly models of pre-school provision.