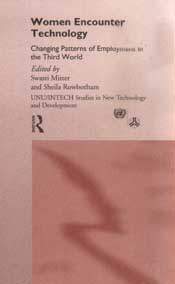 Postmodernism: A shift from collective to individual

Despite the ever-increasing relevance of IT, both to women and to their countries, there has been a conspicuous silence about it in academic literature, mainly, I suspect, on theoretical and ideological grounds. The ascendancy of postmodernism in the discourse of women's studies has led to an unease in the developed world about taking up research that seems to promote internationalism in matters of women's economic empowerment. In our current intellectual climate, women of the third world have become the subject of research in connection with the study of the 'other'; it is the 'difference' rather than the issue of economic liberation that has assumed a central position in academic analysis. Disillusionment with the legacy of the Enlightenment - modernization, modernity and promises of historical progress - has led to a serious questioning by some western academics of the claimed objectivity and rationality of western technology and science. It is not too uncommon in the west now to acknowledge that the assumed 'universal' visions of the Enlightenment - such as progress propelled by modernity and technology - merely reflected the values of interest groups in power, and did not include the voices of marginal groups such as those of non-Europeans and of women. Feminist critiques of Eurocentric 'grand narratives' of the Enlightenment - such as the promises of capitalism, liberalism or rationality - have made a potent contribution to a slow, but gradual, acceptance of plurality in the location of culture and of knowledge systems. Yet, it has not led easily to a modified position for western feminists. The universalizing feminist critique of Enlightenment value has, consciously or unconsciously, overlooked the different needs and experiences of women of non-European origins. Linda J. Nicholson, in Feminism/Postmodernism, reflects on this impasse:

feminist scholars replicated the problematic universalizing tendencies of [general] academic scholarship.... Like many other Western scholars, feminists were not used to acknowledging that the premises from which they were working possessed a specific location.

Fear of an inevitable Eurocentric bias in their work has prompted many women academics to hold back from research that deals with the life and work of women with a different heritage.

Responses of women from the 'other' world itself have contributed further to the schism. Gayatri Chakravorty Spivak, in her book Outside in the Teaching Machine, voices the anguish and dilemma that postcolonial feminist scholars face in establishing a straightforward alliance. How, she asks:

does the postcolonial feminist (like myself) negotiate with the metropolitan feminist? I imagine a sympathy with (the Algerian writer) Marie-AimHe-Lucas's subject position . . . she too is revising her earlier position. As she does so she speaks of solidarity with Islamic women around the world.... And I, a non-Islamic Indian postcolonial, use her (the Algerian writer) to revise my reading of French (Western) feminism.

In the developed world, postmodernism and associated cultural theories furnished reasons for not studying the changing material conditions of third world women in response, for example, to information technology and to globalization of finance and production. The trend coincided with the ascendant philosophies of the 1990s, which uphold the market mechanism, self-help and individual entrepreneurship. There is a trend now to shun collective responsibility for vulnerable or marginal groups, even within the boundaries of a nation. The end result has been, as Ursula Huws recounts in her paper:

it now seems to me that of all the changes which have taken place over the last two decades, perhaps the most important has been the erosion of any belief in the power of collective action, and the slow dawning in each of us of the depressing realization that if we don't do it for ourselves, the chances are that nobody else will do it for us.... It wasn't that [interest in] feminist publishing had declined. Far from it. There were shelves and shelves of poetry and fiction, books about sexuality, about race, about health, about housings, about violence, about psychology. It was just that the attention had shifted away from those previously central concerns of economic independence and the study of work, whether paid or unpaid. I tried looking under 'technology' and found a few collections of essays about women's relationship with technology, but these were heavily outnumbered by 'how to' books about computing. What seemed to have happened was a radical shift of emphasis from the collective to the individual.