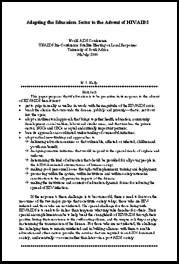 This paper has proposed that if education is to be proactive in its response to the advent of HIV/AIDS then it must:

· get to grips in reality as well as in words with the magnitude of the HIV/AIDS crisis;

· break the silence that surrounds the disease, publicly and privately-that is, get it out into the open;

· adopt a multisectoral approach that brings together health, education, community development, social welfare, labour and similar areas, and that involves the private sector, NGOs and CBOs as equal and critically important partners;

· base its approach on coordinated understanding of successful initiatives;

® delivering education services so that vulnerable, affected or infected, children and youth can benefit;

® designing creative initiatives that would respond to the special needs of orphans and widows;

® determining the kind of education that should be provided for all young people in the AIDS-dominated circumstances of human society;

® promoting within the system, within institutions and within society extensive sensitisation to the all-pervasive impacts of the disease;

® making the institutions and content of education dynamic forces for reducing the spread of HIV infection.

This a challenging task. It would be altogether daunting were it not for the existence of the two major groups that constitute society today, those who are HIV-infected and those who are not infected.

If a community is badly affected, with twenty per cent of its adults being HIV-infected, these twenty per cent can be a powerful resource for mobilising the community to cope with the consequences of the disease and reduce its transmission. There is need to instill full confidence into them and into every member of society that persons living with HIV/AIDS can live fruitful, productive lives, and to ensure that they are accorded special dignity because of their precarious health status. Those living with HIV/AIDS have a wealth of personal resources which they should be enabled to employ for their own well-being and that of others in society. Their special challenge is to seek to do in less than ten years what may take decades for others. Their special accomplishment can be to help break the stranglehold of HIV/AIDS through their positive living, their resistance to the suffocating silence, and the unique role they can play in stemming the transmission of the disease.

The other side of the picture is the large percentage who are not infected. Hope rests with them. It is with regard to them that special challenges lie: helping them to remain uninfected; mobilising their potential to enable communities and institutions cope with the impacts of the disease; working collaboratively with them to strengthen the institutions of society so that they can pull through the present storm; building alliances with them to enable education and other sectors provide the services that are required in an AIDS dominated society, and eventually-sooner rather than later-in a post-AIDS society.