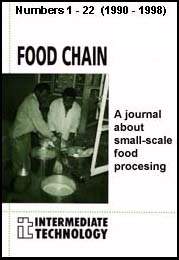 An acceptable quality product can he prepared using the straightforward methods and very simple equipment developed by the Food Processing, Project of GUP.

· Soak the soybeans for 8-12 hours in 10 litres of water per 1kg dry soybean. If the water contains iron this can be removed by using a simple charcoal filter and by aeration using an ordinary aquarium aerator.

· Care should be taken to remove crushed, bad quality and infested beans as they produce a beany flavour during soaking

· Blanch the soaked soybeans, in a perforated bucket or pan, for one to three minutes by dipping them in boiling water. The container should be moved up and down to ensure proper heat treatment.

· Blanching destroys enzymes that are responsible for the development of beany flavours. Longer blanching produces an inferior soy channa that is not suitable for use in sweetmeat production

· Peel the blanched beans by rubbing, then wash and grind on a stone. More than one grind is needed because fine grinding increases the yield of channa Boiling water is added at this stage to assist the girding - the use of cold water may produce a beany flavour.

· Add the ground paste to a large pan containing boiling water and stirr thoroughly. Filter the mixture using a fine cotton cloth. The residue can be used for making different foods or can be dried and used as poultry feed.

· The resulting soy milk is removed from the fire and a quantity of soured, fermented cow milk whey is added and mixed well. The milk coagulates immediately leaving a clear whey.

· The optimum pH for coagulation of soy milk is 4.2 - 4.6 and the temperature is ARC. Initially it is better to use a thermometer and pH indication paper to control the conditions. About 150-200 ml of fermented whey is needed per litre of soy milk coagulation depending on the pH of the whey.

· Leave the coagulated mass to stand for half an hour and then strain using a fine cotton cloth. After hanging for several hours, the resulting soy channa should be put under pressure for 10-20 minutes to remove excess whey.