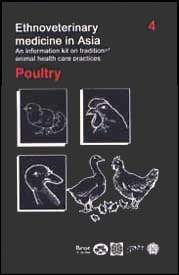 5 The remedy is cited in the literature in one of two ways: (1) it is used to treat them same problem in humans or another animal species; or (2) this plant has proven pharmacological activity to treat the problem in question. For instance, laboratory tests have shown that Nicotiana tabacum (tobacco) leaf extract is effective against Staphylococcus aureus bacteria in vitro (Syat 1990). This tends to support the use of tobacco leaves in treating wounds.

6 The remedy has been scientifically validated as effective to treat the problem in the livestock species in question. Relevant references are given under the corresponding plant name in the Glossary of medicinal plants in the General information manual.

Unless noted to the contrary, all dosage quantities for treatments are for single dosage applications; in other words, each treatment should be prepared at the time of application according to the quantities specified. Dosages for poultry are usually the amount needed to treat 10 adult birds.