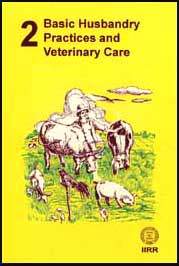 Most cows come into heat every 18 to 24 days all year round. Most cows are in heat for one whole day. The best time to breed is either near the end of the heat cycle.

A heifer or cow is in heat if she shows the following signs:

- String of clear mucus on her tail or hindquarters.
- Trying to ride other animals.
- Wandering around.
- Bawling or crying.

At about five or six months after the cow has been last bred, make a fist and gently but firmly bump it into the cow's right side, in the flank. If the animal is pregnant, you will be able to feel a hard lump move. This is the calf. After six months, you can no longer feel the calf in this way because the calf is now located further down the abdominal cavity.

If you are milking the cow, you should stop milking her at six to eight weeks before she is due to give birth.

Taking care of the pregnant cow/caracow

Proper feeding is important for the pregnant cow. A good ration consists of legumes, silage and grain. A pregnant cow also needs salt, water and minerals. See section on Nutrition for details.

Does are in heat when they show the following signs:

- Bleating
- Running back and forth.
- Wagging their tails often.
- Riding other does or allowing themselves to be ridden.
- Drop in milk production.

The doe's heat lasts from one to three days.

Be sure to exercise the does daily. Approximately 5 months (150 days) after breeding, the does will kid.

- The sow's vulva is swollen and reddish.

- Sow stands still when she feels pressure on her back.

Heat lasts about 24 hours. When not pregnant, sow exhibits heat every 21 days.

How to induce heat

Some sows do not come to heat at the expected time. Here are some methods used by farmers to induce heat:

- Gently stroke the sow's vulva with a freshly cut papaya stalk every morning for 3-5 days.

- Spray the sow's pen with boar's urine every morning for 3-5 days.

- Bring the sow to the boar or place the sow in a pen next to the boar.

Mating A sow should be mated twice, preferably late in the afternoon of the first day of heat and early in the morning of the second day.

Do not mate animals during the hot time of the day.

Young boars often do not know the proper way to mount a sow. Assist the boar to avoid injury to boar and sow.

If a sow does not show signs of heat three weeks after mating, then she is pregnant.

Dates of breeding and birthing