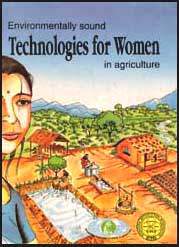 Women are critical to the well-being of farm households. Aside from raising children, women are expected to prepare all meals, maintain the homestead, and assist in crop and animal production, all the while tending to the general health of their families. Perhaps, ironically, it is because women have so many responsibilities that they have been over-looked by agriculturalists and policy makers-it has been more convenient to label men as farmers and women as child raisers and cooks. In truth, women are involved in all aspects of agriculture, from crop selection to land preparation, to seed selection, planting, weeding, pest control, harvesting, crop storage, handling, marketing, and processing. Whatever the reason for this neglect, the importance of developing farming technologies relevant to women has only recently been recognized.

In 1992, the International Federation for Women in Agriculture (IFWA), New Delhi, and the International Institute of Rural Reconstruction (IIRR), Silang, Cavite, Philippines, agreed jointly to develop simple, science-based resource materials which could be used by female and male extension workers. The result is a manual of 60 simple environmentally sound technologies which will help reduce drudgery and increase efficiency while helping to maintain a clean and healthy environment.

The manual was produced using a modified version of an approach developed by IIRR to prepare information and training materials quickly and efficiently. Topics were solicited from author experts all over India. They represent national institutes such es the Indian Agricultural Research Institute, New Delhi; the National Dairy Research Institute, Karnal; the Central Institute of Fisheries Education, Bombay; Haryana Agricultural University; Delhi University, and several other agencies. A number of manuscripts were also contributed by respected NGOs. Still others were gleaned from published works. The raw manuscripts were presented, critiqued, and revised in a sixday editorial and illustration workshop in New Delhi in June 1995. The revised manuscripts were taken to IIRR's headquarters in the Philippines where they were edited, laid out, and scrutinized again by IPWA and IIRR specialists. The camera-ready product was then sent to India for printing.

The topics have been edited and laid out with care to make them interesting and easy to understand. Illustrations have been used wherever possible to explain technologies. While it was written for extension agents, it is hoped that even neo-literates will be able to make good use of this manual.

A complete list of participants, contributors, and contributing agencies is given at the back of this manual.