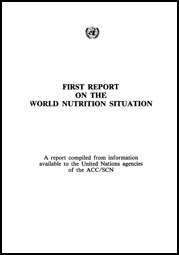 Hunger and malnutrition1 cause perhaps the most widespread human suffering in the world today. While hunger cannot be measured directly, the extent and severity of malnutrition are fairly well known in general terms. But changes in the world nutrition situation over time are not so obvious, except when brought to public attention because of famine. Information about trends are needed in order to adequately respond to the problems of hunger and malnutrition. For example, has the proportion of the population affected gone up or down over the last quarter century? Have the numbers of people with inadequate food increased as the population has expanded? How far have recent events, notably economic recession and the drought in Africa in 1983-85, changed underlying trends for the worse?

1 Definitions are discussed in section 4 and in the Supplement on Methods and Statistics to the First Report on the World Nutrition Situation. A glossary of terms is given at the end of this report.

Firm answers to questions about the extent and trends of nutrition problems are sometimes incomplete and definitions problematic. This is discussed below. But by piecing together data from various sources on related factors, a plausible and consistent view emerges. This report - the first to bring together such data - aims to lay out the current state of knowledge about the nutrition situation in the developing world.

Food production and availability, population growth, economic development and health interact to substantially determine the present world nutrition situation and the direction in which it is heading. FAO's Fifth World Food Survey (1987a, p.v) concluded that while much starvation and malnutrition remained in the world, there is evidence of a turn in the tide. It continues: "...the proportion of the population suffering from undernutrition has declined, even though the absolute numbers of the undernourished have increased..."

Certain striking aspects of global trends in nutrition are illustrated in Figures 1 to 4. Figure 1 plots improvements over the past 20 years in infant mortality rates, which summarize many factors including food availability and health. The middle panel shows that these death rates have fallen rapidly throughout the developing world and by more than half in some countries. This falling incidence is encouraging. But during the same period, population nearly doubled in most regions, resulting in a drop in total numbers of annual infant and child deaths of only 20 percent (lower panel in Fig. 1). This is an average figure for the entire developing world; in fact, the number of infants and pre-school children dying each year in Africa has risen. In the short-term, increasing child survival contributes to population growth, but ultimately, falling infant and child death rates precede falling birth rates.

Much more information on child nutritional status is available now than even 10 years ago. WHO (1987) has compiled results from more than 50 national surveys conducted from 1975, and re-analyzed many of these to give consistent indicators, as used in this report. Averaging these survey results over two to three year periods, and adjusting for regions, gives the results shown in Figure 22. The indications are that prevalences of underweight children declined significantly between 1975/6 and 1979/80, and have been unchanged since then. Improvements in living conditions recorded in many countries during the 1970's have slowed or halted with the severe economic recession of the early 1980's, and this is affecting child nutrition.

2 The method of calculation is referred to in section 4.3, and discussed in detail in the Supplement on Methods and Statistics. It allows for the fact that the availability of data is uneven for different regions over the different time periods.

Different regions of the world show different trends, and indeed there are variations between countries within regions. The data available generally do not allow reliable estimates of trends in nutritional indicators at country level, and this report focuses primarily on groups of countries, defined by similarity in nutritional situation and based on the regional groupings used by the UN. Groups of countries in which child nutrition is calculated to have improved significantly, deteriorated or remained unchanged, are shown in Figure 3. The method used is described in section 4.4. The map illustrates the overall impression of recent trends in nutrition. Generally, malnutrition has increased in much of Africa, remained stable in South America and decreased in Asia and Central America.

These analyses must be regarded as of a tentative nature because of the scarcity of data on child anthropometry which would provide the basis for a robust assessment of trends. However, when considered together with other information, including that on food availability and infant mortality rates, the general impression is probably sound, though the Latin American situation in reality may be less sanguine, and that in parts of Africa, subject to drought and civil unrest, more precarious.

Low birthweight, principally due to maternal malnutrition in the developing if not the developed world, is a recently collected indicator of nutritional status. Low birth weight is associated with impaired child performance, health and survival. The incidences of low birth weight by country for 1982 are presented in Figure 4. Since there are as yet insufficient data to follow trends, these incidences are not presented over time. This map complements the nutritional status data on regional trends to indicate the relative nutrition situation between countries.

The emphasis in this report is on estimating prevalences and trends in indicators of access to food and of nutritional deficiencies for groups of developing countries. The report does not review the causes of food and nutrition problems nor does it consider other diseases related to diet (e.g. obesity and hypertension) even when these are important concerns in some developing nations. The choice of indicators is constrained by the availability of data. While it is assumed that nutrient intakes of individuals and infections are the immediate factors which determine nutrient availability at the cellular level, and are therefore ultimately determinants of nutritional status, neither are discussed in this report. Future updates of this report will devote greater attention to infections, particularly diarrheal diseases, since their role in the etiology of nutrition problems is recognized as of substantial importance, and more data is now becoming available.

Estimates are based on prevalences of underweight children from survey data, as described in section 4.3. Underweight is defined as below 2 standard deviations by NCHS/WHO standards. The improvement 1975/6 to 1979/80 is statistically significant. The "Expected Prevalence" is the percent of the NCHS reference that is below 2 SDs (i.e. 2.5%).

FIGURE 3: Changes in Prevalence of Underweight Children by Groups of Countries from 1980 to 1984.

Direct measures of dietary intake or consumption are rarely obtained from nationally representative samples. For this reason, possible trends in average food consumption are inferred from changes in "dietary energy supply" (DES, provided by FAO) which refer to the total food nationally available for human consumption, expressed on a per caput per day basis (kcals/caput/day), for each country and year. There are obvious limitations in the use of DES as an estimate of consumption since it does not allow for wastage, or losses through food preparation or at the food plate level.

A related indicator used in this report is the proportion of the population estimated to have access to less than an absolute minimum amount of food energy (based on 1.2 times the basic metabolic rate for adults). These estimates are calculated from DES and additional data on distribution. The methods (see section 4.1.4) are those used by FAO in the Fifth World Food Survey (FAO, 1987a, Appendix: "Methodology for Estimating the Incidence of Undernutrition"). The appropriate terminology for this indicator has been a matter for debate; formally, it was decided to refer to it as "marginal access to food", partly to emphasize that it is not based on direct measures of consumption. However, for brevity and in line with usage in the Fifth World Food Survey, it is also referred to here as "undernutrition". The above cautions should be borne in mind when interpreting this expression.

A variety of indicators including anthropometric, biochemical, and clinical data can be used as measures of nutritional status. Biochemical and clinical data from national samples are rare and for this reason this report relies primarily on anthropometric data on preschool children (1 through 4 years of age), compiled by WHO (1987), to monitor trends in nutritional status. Prevalences of underweight children (from their weight compared with the expected weight at that age for healthy children, known as weight-for-age) was chosen for this report, because of the greater availability of data. Finally, infant and child mortality rates are included as general indicators of nutrition and health. This report is descriptive, and immediate and causal factors are not analyzed, although such an analysis would be a useful next step.

Thus, the two major proxy indicators used refer to access to food, and weight-for-age in pre-school children. Data availability and quality are nonetheless uneven for these nutritional indicators, although they are considered the most suitable for the present purposes. DES data from food balance sheets, like mortality rates, are sometimes rough guesses at best for a number of countries, particularly for the poorer ones. Weight-for-age data are not available from nationally representative samples for the majority of countries and even when they are, results usually refer to only one point in time. Therefore, this report also relies on estimates of prevalences of underweight based on regression models, incorporating information from food balance sheets, infant mortality rates and other variables, to fill in the gaps. These estimation techniques are referred to in section 4.1.6.

In general, there is at the country level an association between growth retardation and per capita food availability. However, that association could be caused by growth retardation leading to low food consumption, or vice-versa. It is also important to note that at the family level it is rare that food availability in the market limits household food intake, which is almost always limited by economic factors such as income and land tenure.

The core of this report is contained in section 2, where estimates relating to food availability, underweight children, and infant and child mortality are given by country groups. Particular emphasis is given to Africa, the region showing trends of the most concern. Information on data sources, methods of calculating indicators, and their presentation, is given in section 4. Data have been compiled from United Nations sources, generally FAO, WHO and the UN Population Division. WHO data on anthropometry has been used, together with other variables, to estimate prevalences of underweight children to obtain broad dimensions and trends. Panels containing data on nutrition indicators by country groups allow comparisons between different indicators for each group, and for the same indicators across country groups. Most of the data points are either three year averages, or are derived from these except for mortality which are based on a five year period. However for dietary energy supply, food production indices, and population, annual estimates are also given for the period 1980/85.

Recent information on prevalences of deficiencies of three micro-nutrients - vitamin A, iron, and iodine - is given in section 3. Here again information is given on access to the nutrients in the diet, from Food Balance Sheets, and on the clinical effects of deficiencies usually derived from WHO compilations.

The report seeks to present a plausible picture of the world nutrition situation in sections 2 and 3. The relevant sections of the Technical Notes (section 4) indicate the limitations of the data, and where statistical methods have been used for hypothesis testing, the confidence limits of the results. Fuller details will be given in the Supplement on Methods and Statistics, to be issued in early 1988.