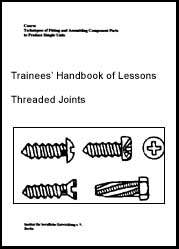 The preparations for direct threaded joints differ from those for indirect joints.

Direct joints can be found mainly in parts or assemblies of machines. Most threads are cut mechanically and the component parts are simply joined by screwing. Make sure that the parts which are to be joined by screwing coincide in their nominal thread diameters, pitch and sense.

Drill chuck on a machine spindle in a hand drill.
Closing caps on containers.

Pipes may be directly joined by screwing as well. Most connecting parts (pipe bells) and fittings (angles, bends) are manufactured industrially and only an external thread needs to be cut on the pipe.

An unthreaded 1-inch (25-mm) steel pipe is to be screwed into an elbow fitting heaving internal thread. A short external thread is to be cut on the pipe.

- Mount the cutting dies with pipe thread R 1-inch in the sequence of operations 1 to 4.

- Set the fine adjustment for the entering tap.

2. Chuck the pipe, apply cutting fluid to the deburred end of the pipe.

3. Place the die stock, pilot end first, on the pipe end, and adjust the pilot.

4. Make an entering cut and rough cut over 19 mm length by turning evenly in clockwise direction. Then loosen the clamping screw and break the burr with a short jerk to the right.

5. Open the die stock and remove it. (Do not turn it to remove it).

6. Set the fine adjustment for re-threading.

7. Place the die stock on the pipe and adjust the pilot.

8. Re-thread, then loosen the clamping screw and deburr the pipe.

9. Open the stock and remove it from the pipe (Do not turn it to remove it).

10. Clean the thread and apply some grease to it.

11. Screw the pipe into the elbow fitting until it stops. Use a pipe wrench.

Figure 35. Making a joint by screwing

- Where tight joints are to be made of pipes, apply a packing of hemp tightly, starting from the front end of the pipe backwards. Apply in right-hand direction if the thread is right-hand. Then apply acid-free grease and screw into the internal thread, first by hand, then with a pipe wrench.

- Where the pipe joint is to be made as a part of a permanent pipe installation, use a pipe with long thread to ensure that the screwed joint can be loosened even after a long time. Screw a pipe bell over the full length of the thread. Use short thread on the pipe and press it flush on the long thread. Then turn back the pipe bell and join both pipes without twisting either of them.

Most threaded joints for fastening purposes are indirect joints. When making the joint, make sure that the nominal diameters, pitches and senses of rotation as well the material of bolts, screws and nuts coincide.

There are two main ways of making a threaded joint the indirect way.

Two steel parts are to be joined firmly by a hexagon head bolt and a nut. The bolted joint will be exposed to dynamic stress, hence it must be locked.

Figure 36. Joint made with a bolt and a nut, locked with a spring ring

1. Mark out the steel parts and punch a mark for the bore hole centres.

2. Set up the steel parts for drilling. Drill holes together, where possible. (The bore hole diameter should be slightly bigger than the thread diameter).

3. Deburr both ends of the bore hole with a spotfacer.

4. Apply some grease to the bolt. Insert the bolt into the bore hole and place a locking element (such as a spring ring) onto the end projecting from the hole.

5. Screw on a nut for a few turns by hand, then tighten with an open ended wrench.

- Use washers where the surface of the work is unclean or smoothen the surface.

- Where the bore hole is provided when the part is supplied, use a flat or pilot-type countersink to level the face which bears the bolt head.

Three steel parts are to be joined firmly by a hexagon head bolt. The receiving thread is to be in the last of the three component parts. The bolted joint will be exposed to dynamic stress.

Figure 37. Joint made with a bolt and a component part, locked with a spring ring

1. Mark out all steel parts, punch a mark for the bore hole centre.

2. Set up the steel parts for drilling, drill the holes together, if possible. The bore hole diameter should be of the same dimension as the minor diameter of the thread.

· Use the following formula to calculate the drill diameter:

· For blind holes, consider the length of thread engagement and the run-out depth of the thread tap. The tap hole must be made deeper by that dimension. Formula:

Where no values can be taken from handy tables, calculate approximate values using the following formula:

· Read the speed of the drill from the table or calculate it with the following formula:

3. Take the component parts apart and work them separately. Face both sides of the hole with a 60° included angle countersink. The hole to be faced is that in the last component part in the joint. The sink diameter is to be the same as the thread diameter.

Then cut the thread.

4. Bore an oversized hole in the two other component parts. The dimension of the oversize depends on the nominal diameter of the bore:

5. Put the component parts are together, push the locking element, such as a spring ring, onto the threaded bolt and apply some grease to the threaded portion. Srew in by hand and then tighten with an open ended wrench.

- Where several component parts are screwed together without a nut, the receiving thread must only be in the last part as seen from the head of the screw. All in between parts have through holes.

- Locking devices are always assembled at the side with the highest torque.

- Joints which consist of a bolt or screw and a nut always have the highest torque on the nut. Hence, the head of the bolt or screw is held and the nut is tightend.

- Always assemble a locking component at the nut end in joints which consist of a bolt or screw and a nut.

- Where several nuts are tightened on a component part (for example, the lid of a container), always start from the centre and proceed outwardly, crosswise.

Figure 38. Sequence of operations in tightening a screwed joint