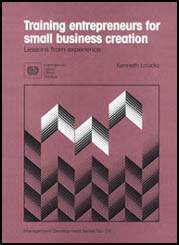 On the other hand, national attempts to develop entrepreneurs usually require an organisation with national status. Many developing countries face not only gaps in the infrastructure but also serious quality problems with those organisations that do exist. Further, entrepreneur development on a national scale, particularly when disadvantaged target groups are involved, cannot be expected to be conducted on a self-financing basis. Even if the entrepreneur development effort plays a co-ordinating role, it will need the status, prestige, a subcontracting budget that commands respect, and a position in the priorities of the infrastructure organisations. Such requirements dictate the involvement of the government.

However, government organisations have severe limitations when dealing with private sector programmes. The imposition of bureaucratic structures and the appointment of permanent staff with civil service emoluments and attitudes curtail the flexibility of the organisation as well as its credibility with small-scale business owners and the private sector. Staff with the requisite entrepreneur training expertise and private sector know-how are not likely to be attracted by civil service remuneration. At the same time, an entrepreneur development programme is likely to be rather small in budget and staff when compared to other government activities and thus it would be difficult to appoint a head of the programme with sufficient rank and status to command the respect of other co-operating government departments.

The compromise solution is usually to create a separate grant-supported body, with a board of directors including representatives from government, trade associations, chambers of commerce, commercial and development banks, small business associations, and entrepreneur associations. An example of a comprehensive entrepreneur development structure is given by India.

At present, EDP work is being undertaken by over 50 different agencies in 20 states all over the country. Some of the agencies engaged in EDP work may be grouped as follows:

3. Some 10 to 12 other agencies such as nationalised banks, management institutes and voluntary organisations. Universities and colleges also are now beginning to start EDPs by way of a few elective papers as part of their regular courses of study.

Recently the following central institutions have been formed.

(b) National Institute for Entrepreneurship and Small Business Development (NIESBUD) set up at the initiative of Ministry of Industry, Government of India, has started functioning from Delhi in early 1984.1

It must be entrepreneurial in culture and outlook. This does not mean that it must be run for profit or on commercial lines but that it has the characteristics which are identified as belonging to the essence of entrepreneurship:

If particular target groups are being aimed at, the agency should relate to the local environment and people, and have good relations with the local government agencies, banks, district industries, retailers and other members of the business community. Its operation will be enhanced by the existence of a local steering committee, such as that used by the Community Economic Development Programme of the Entrepreneurship Institute for the following purposes - to:

- create linkages between the public, private and university sectors of a community, thereby enabling existing business resources contained in those communities to operate more effectively on behalf of smaller enterprises (creating the entrepreneur support network);

- reach out, identify, and select individuals with sound ideas for growing enterprises, as well as entrepreneurs who have young firms which they would like to see grow (outreach and entrepreneur identification);