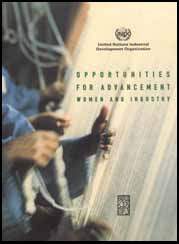 The crucial role of women has never been disputed. As nurturers, protectors, peacemakers, givers and supporters of life, they have, since time immemorial, woven the fabric of society and gently nudged humankind towards a healthier and happier world. The advent of new technologies - in the home, in the factories, on the farm - may have released women from the time-consuming drudgery of manual chores, but has in no way rendered their contribution superfluous. Women in all sectors of society are encountering fresh opportunities to use their organizational skills, creativity and sense of responsibility - the very qualities which have enabled them to succeed in their traditional roles. During the last fifty years, women the world over have outstripped their fathers and grandfathers in terms of personal growth. With equal access to education, girls are excelling in the "male" domains of science and mathematics. University admissions in most developed countries show a balance of women and men, and in the developing world there is a steady increase in female graduates. The number of women in professions has crescendoed (in some countries there are, for example, more female than male medical doctors), and with the freedom of choice to raise a family or not, marry or remain single, pursue a career outside the home or work as a full-time homemaker, women are taking hold of their destinies in a way which was beyond the wildest dreams of their mothers or grandmothers.

The role of women in industrial development has, with the introduction of new technologies, turned a significant corner. The simple, assembly-line tasks which in the past were often relegated to unskilled women, have largely been replaced by automation. UNIDO is mindful of the very real need to harness the potential of the female work-force and tram women for new responsibilities so that automation can be their launching pad into more interesting, fulfilling and financially rewarding occupations. In 1986, UNIDO established a special unit for the integration of women in industrial development, and in 1990 initiated a five year programme and plan of action to speed up the equitable integration of women in industry. Since that time, UNIDO has been preparing women to meet the challenges of technological innovation, industrial restructuring and economic reform so that they can play a new and pivotal role in the process of industrial development. In a number of projects throughout the developing world, women have been taught to capitalize on their intrinsic skills. In Kenya, for example, home-based dressmakers evolved into successful entrepreneurs, generating new employment opportunities for other women; the same leap was made by women in Tanzania involved in food-processing.

With almost thirty years' experience in tackling problems of industrial development, UNIDO is well equipped to guide women - particularly those in the developing world-into the age of advanced technology. Its sensitivity to social and cultural constraints has led the Organization to adopt a multidimensional approach to the integration of women in industry which will enable women not only to participate equally, but to benefit equally, from both social and industrial development. The following pages describe in detail the various components of UNIDO's programmes. While industry in some countries is already drawing on the full potential of its work-force, others depend on the advice, assistance and encouragement of UNIDO. Together with my staff, I am deeply committed to giving to women, regardless of nationality, race, religion or social background, an equal opportunity to shape their lives and the world around them through sustainable industrial development.