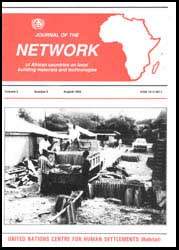 Earth is one of the main materials used for shelter construction in most rural low-income settlements of developing countries and also in urban ones. Under these circumstances, earth construction has often been characterized by dilapidated, temporary and unsafe structures. In fact, living examples of good, durable and attractive earth buildings are hard to come by, while the popularity of the material has dwindled to the extent that, even in circumstances where it should be the obvious choice in rural housing construction, preference has been given to relatively modern materials.

In principle, soil is not restricted to low-cost construction, but, rather, forms the basis of a technically sound engineering practice which is comparable to concrete technology or that of any of the popularly adopted building materials. The issue of earth being a low-cost material is incidental and, indeed, an added advantage to these technically viable properties. For this reason, the material should be promoted alongside other conventional materials to the extent that professionals in the construction sector can make a choice for earth in preference to or as an alternative to comparable materials. It is along these lines that the objectives of wide-scale adoption of the material could be achieved while meeting the construction needs of low-income people.

Following this principle, earth construction faces an obvious disadvantage in comparison with other popularly adopted materials. There is only limited knowledge of good earth-construction practice. The construction technologies which are predominant in the informal channels for artisan training are defective and inappropriate. In the conventional technical and professional training institutions, there is hardly any coverage of the subject of earth construction apart from basic civil engineering considerations.

This publication covers a range of practical information and knowledge on different aspects of earth construction including: (a) Basic principals of earth application; (b) Design and construction techniques; (c) Surface protection; and (d) Production of components. The publication concludes with a comprehensive bibliography which would be useful for those who wish to acquire further knowledge and reading material on the subject.

Since its inception, UNCHS (Habitat) has been actively promoting energy conservation and the more efficient use of energy in human settlements. The process of producing electrical energy, which is practically the main from of energy supplied to buildings, is, unavoidably, very inefficient. The overall efficiency of electricity production, from the power station to the consumer, is little more than 20 per cent. Hence, for every unit of electrical energy that is saved in a building, up to five times that value is saved in the power station in terms of primary energy. In order to reduce the consumption of electrical energy in buildings, passive solar heating and natural cooling are two important means which lead to financial benefits without reducing the required comfort in buildings. This publication covers a number of areas with regard to energy in buildings such as fundamentals of passive solar architecture, fundamentals of heat flow, basic design principles and strategies, final design evaluation etc.

Human settlements are frequently affected by natural disasters - earthquakes, floods, hurricanes, cyclones - which take a heavy toll on human lives, destroy buildings, and infrastructure and have far-reaching economic and social consequences for communities and countries. The vulnerability of human settlements to natural disasters is continuously rising due to the concentration of population and economic activities in large agglomerations and the precarious situation of low-income settlements in both urban and rural areas.

In many developing countries, characterized by heavy a concentration of population, shanty towns, slums and marginal settlements, a disaster can lead to serious consequences even where the initial impact of the disaster is not very severe. The most common of such repercussions of disasters are characterized by cyclone-flood-contamination-epidemics continuum. It is this possibility of a chain reaction that has led researchers and policy-makers to the conclusion that a successful disaster prevention and mitigation programme necessarily involves a complex set of inter-dependent measures ranging from physical planning to crisis management.

This publication is based on the Centre’s concept that although natural disasters cannot always be prevented, their effects can be reduced through a variety of measures, such as better construction standards, the definition of high-risk areas and activities of high vulnerability, improved land use, and the design of buildings and infrastructure systems to minimize their vulnerability.

Examples are given of pre-disaster and post-disaster projects implemented by the Centre, with a view to illustrating some of the measures available to mitigate future disasters. The aim is to foster a greater disaster awareness and to enable disaster-prone countries to learn from each others’ experience.

Over the past several years UNCHS (Habitat) has been examining the existing and potential contribution of women to national development, through their participation in the improved functioning of the human settlements sector. One important aspect of this is the role that women play and have the capacity to play in the construction industry. The involvement of women in the construction industry varies greatly from country to country, but very few countries have recognized the full range of possibilities for drawing on women’s skills as building artisans and entrepreneurs.

In most countries, the building industry has traditionally been male-dominated, and women have considerable difficulty in gaining access to trade training and in obtaining skilled jobs. Particularly in the developing countries, women are usually limited to the poorest-paid tasks, and they are severely discriminated against in attempts to improve their status. Yet, in those countries where women have been given the opportunity to compete on an equal footing, they have shown that their work is as good as that of any craftsman and that they are capable of undertaking most of the tasks performed by their male counterparts.

This report is intended to highlight women’s needs in training and job-placement in the construction industry and to suggest ways in which affirmative action can be taken to overcome the barriers traditionally faced by women in obtaining construction-industry employment.

Global Strategy for Shelter to the Year 2000 - GSS in Action

This publication has been written for all those who are interested in ways, means and modes to improve the shelter sector in their own countries: policy-makers, entrepreneurs, researchers, community leaders - in short, men and women looking for a more habitable world. It illustrates practical applications of the principles of the Global Strategy for Shelter to the Year 2000 (GSS).

The first part offers, for the reader who is not familiar with the Global Strategy, an overview of the main recommendations of that document. The second part, which forms the main section of the publication, consists of 22 success stories from 17 countries. They highlight one or more recommendations from the Strategy and show how they were implemented through various programmes and projects. The third part includes practical suggestions on how to initiate a national shelter strategy. The last part describes the various actions taken by governments around the world to study, formulate, implement or complement their national shelter strategies.

To facilitate shelter for all by the year 2000 is not a dream, it is an ambitious but realistic goal. It can be met if countries persist in their efforts to house their citizens, with courage, conviction and perseverance, using all the available tools of an enabling environment.