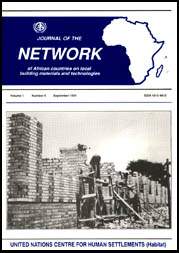 Nigeria: Research and development in the promotion of standards and specifications for stabilized soil blocks*

The wide-scale availability of soils, including clays, in Nigeria, is an indication of a successful promotion of soil blocks, burnt bricks and stabilized soil blocks. Though basic machinery and equipment are indispensable in the production of some of these materials, manual operation can lead to noticeable improvements in the final products. In soil construction, for instance, the Nigerian Building and Road Research Institute (NBRRI) has developed a manually-operated block-making machine which has improved the mechanical properties of soil blocks as compared with hand-moulded blocks. Also, an improvement in stabilized soil has been achieved by NBRRI by adopting simple measuring cans for proportioning of soil and cement and the use of a sieve for grading the soil. In fact, the resource endowments of Nigeria offer a good potential for production of a variety of indigenous building materials. However, this potential has not yet been translated into commercial production, mainly because of lack of standards and specifications.

The common practice in rural areas is for materials to be produced without the application of any standard. Even in those cases where standards have been stipulated, a fundamental gap remains in the sense that there is no means to enforce the standard (A typical example is NIS 74, 1976). Worse still, the general run of building regulations and codes of practice makes little or no reference to locally-adopted standards but, rather, incorporates standards of imported building materials.

Standards and specifications are basic instruments for promotion of acceptable products on the market and, in the context of building materials, they ensure economy, durability, safety and cost-efficiency, as well as health in construction.

It is disheartening to note that, in Nigeria, hardly any standard on indigenous materials has been formulated so far. It is against this background that this paper aims at reviewing the state-of-the-art in the production of adobe or sun-dried blocks, stabilized-soil blocks and burnt-clay bricks. An attempt is also made to highlight gaps in the quality-control procedures and technical characteristics for these materials.

A clear understanding of the characteristics of a selected soil group is a prerequisite for establishing successful soil-construction practice. To a large extent, failure in earth construction and the general unpopularity of the materials are due to a lack of knowledge on the properties of soils prior to their use in construction (1).

Soils can be classified into six main groups, based on their texture or grain size. The composition of soil, in terms of the grain size distribution, determines the plasticity, compactability, and cohesion which, in turn, determine its fundamental mechanical properties. For the purpose of use in construction, soil classification has been categorized into the three following groups (2):

Mineral content of soil, if determined, can be a useful criterion for determining the suitability of soils. Investigations carried out at NBRRI reveal that:

(a) Soils with 15 per cent or less clay content are suitable for soil blocks (adobe);

(b) Soils containing expansive clays (black cotton soils) are not suitable for direct use, except when treated with special agents;

(c) Soils with organic matter exceeding 1 per cent and with soluble salts greater that 1 per cent or with excessive mica flakes are not suitable;

(d) Quartz and other siliceum minerals, limestone and marl, are acceptable.

Bricks made of earth and 10 per cent cement

In its research activities, NBRRI has considered recommendations made by various research groups (2, 3, 4, 5, 6). Generally, stabilization with 8 to 12 per cent cement has been recommended by the majority of these groups, however, this level of cement consumption makes the stabilized-soil blocks uncompetitive against sandcrete blocks. NBRRI’s investigation was confined to the use of 5 per cent cement. The compaction effort was 1 N/mm2 and the curing period was seven days. Results from the test were in conformity with those of ABU (see table 3).

Much work has been carried out at ABU on contact layer for hollow stabilized blocks and immersion period. For an assessment of the influence of contact layer on compressive strength, various types of packing materials were selected viz. sand-cement mortar (1:1), 3-ply plywood (3 mm thick), softboard sheet (10 mm thick), soil-cement (1:8) and steel platens. Results for 8 per cent cement-stabilized blocks are shown in table 4.

The above results show clearly that the compressive strength of stabilized-soil blocks is underestimated in comparison with the use of softboard by about 20 per cent when plywood or soil-cement mortar is used and by 25 per cent when sand-cement mortar or steel platens are used. It follows that the soft-board sheets are the most suitable contact layers for the assessment of compressive strength of stabilized-soil blocks.

The durability test (wetting and drying) on compacted-soil/cement mixtures gives the weather-resistant properties of the stabilized soil block. The recommended limit for minimum durability is not more than 5 per cent loss in weight after 12 cycles of wetting and drying for permanent building developments and for urban areas with more than 508 mm of annual rainfall (5). Other recommendations state that the weight loss should not be more than 0.4 per cent after six cycles (7). From results obtained by ABU and NBRRI, the two recommendations could not be met. As a solution, NBRRI proposed the use of overhangs of the roofs and verandahs in most houses constructed with stabilized-soil blocks.

Stabilized-soil blocks of high strength, low water-absorption characteristic and high durability require certain basic production practices, notably, a thorough mixing of the ingredients, avoidance of excess water and good wet curing. It is important to carry out regular tests on samples of blocks for each production batch. To ensure the suitability of blocks for use in construction, the following standard tests are recommended.

A sample of the block is dried and the weight is recorded. The weight is then divided by the volume which gives the bulk density (kg/m3). A high bulk density is an indication of high compressive strength for each batch, an average of three blocks should be measured and any block with a variation in weight exceeding 5 per cent should be rejected.

At the time of use, the moisture content of the blocks should not be more than 4 per cent.

This test should be conducted on three blocks, and the average value recorded should not be more than 25 per cent.

In undertaking the wetting and drying test, the following weights of a block are recorded:

(a) W1 = The weight of a block after being cured and dried ready for use;

(b) W2 = The weight of the block after immersion in water for 24 hours;

(c) W3 = The weight of the block which has been dried in the sun after 24 hours soaking in water, and

(d) W4 = The weight of the sun-dried block after 20 strokes of a wire brush. The process is repeated through six cycles with each cycle representing an entire operation from W1 through W4. After this, the following results are determined:

From the above analysis, a good block is one which shows no sign of erosion or flaking and having a weight loss of not more than 0.4 per cent after six cycles. Table 5 shows test results carried out at NBRRI.

Brick masonry of a modern house

The test specification for precast concrete blocks (BS 2028) as well as that for burnt clay bricks (NIS 74) are not directly applicable for compressive strength tests of stabilized soil blocks. In the absence of a suitable specification, they could, however, be used as a guide with the following modifications:

(a) The pre-conditions recommended by NIS 74 for perforated bricks can be followed:

Immerse the specimen in water at 27.7°C for 24 hours. Remove the specimen from water and drain out any surplus water. No mortar shall be filled in the perforation and no mortar capping shall be provided.

Thus, “preparation of specimen”, recommended by BS 2028, should be neglected, since concrete capping reduces the strength and long-term immersion in water, due to rehydration of cement, and does not allow for testing the minimum wet compressive strength.

(b) “Actual testing” recommended by NIS 74 for perforated bricks should be modified and read as follows:

“Place the hollow faces of the block between two softboards each of 10 mm in thickness and carefully centred between the plates of the testing machine. Apply the load axially and without shock at a steady increasing rate of 15 N/mm2 per minute until failure occurs”.

The use of Plaster of Paris should be examined before it is recommended for compressive strength tests.

(c) Other recommendations, given by both standards (NIS 74 and BS 2028), such as “Test specimens”, “Apparatus”. “Measurement of compressive strength”, and calculation of “Test results”, should be taken into account.

(d) Further tests are to be carried out to gather sufficient results for the preparation of a new specification for stabilized soil blocks as it is urgently needed in the construction industry.

(e) The Department of Civil Engineering of Ahmadu Bello University and NBRRI should carry out further tests on contact layers and minimum wet compressive strength of stabilized-soil blocks.

The use of stabilizing agents, notably, cement, in soils, to produce a durable building material, had been recognized for quite a long time. However, until some presses with adequate compaction effort were developed, starting with the Cinva Ram, it was not possible to extend the idea in a practical way to the building industry. One such initiative was used locally to produce cement stabilized bricks of the standard size 9 1/2” x 4 1/2” x 3” (240 x 115 x 71 mm). Full-scale trial walls were built with these standard-sized bricks in Kano, in northern Nigeria. The local masons were unhappy with the rate of production and the extra skill needed to lay them properly, Accordingly, NBRRI decided to develop a block-making machine that would reflect local conditions and practices. In this respect, it should be recalled that for over three decades since the end of the Second World War, sandcrete blocks made from sand and cement of sizes 18” x 9” x 9” (460 x 230 x 230 mm) and 18” x 9” x 6” (460 x 230 x 150 mm) were used as the conventional walling materials in Nigeria. 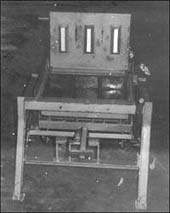 NBRRI developed a block-making machine to produce three blocks in one operation. Normal production of blocks is achieved by a three-person team. One person mixes and loads the soil into the press, another compacts and extracts blocks while the third person transports the block to the drying area. Once the workers are familiar with the production process, 800 blocks can be produced daily.

The machine has been in high demand since its use in the construction of a house at a model village in Kano State in northern Nigeria. The potential of the machine for urban housing has been enhanced by its use in a housing project by the Federal Housing Authority in March-April 1990, in Festac Town, a satellite town of the city of Lagos.