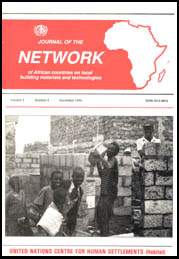 Generally, bricks produced out of red murrum soils are porous and of low strength (20-25 kg/cm2).

The Central Building Research Institute (CBRI) has been studying the murrum soil of Hyderabad for some time and has developed processes for making bricks of a compressive strength in the range of 100 kg/cm2 from it.

According to the methods worked out in CBRI, bricks of improved quality can be produced from red murrum soil processed by any of the following four alternative methods:

(a) An admixture of 70-per cent red murrum soil and 30-per cent clayey soil, wherever it is available around low-lying areas, tank beds, banks of rivers, etc., is used for moulding bricks. For the purpose of calcination, it is assumed that clayey soil would be transported an average distance of five miles. Calcination would be undertaken to remove oversize particles above 1-2 mm, and the refuse material after the calcination treatment would be disposed off.

(b) The process is the same as in (a) above, except that, clayey soil is assumed to be available in close vicinity of the moulding site.

(c) Red soil is used without any admixture of clayey soil. The calcination method is followed to remove oversize material above 1 mm and the refuse material is disposed off.

(d) Red soil, as a whole, is used. The calcination method is not applied, but instead red soil is ground to 1-mm size in a pan-mill before it is used for brick-moulding.

The calcination method of separating lime nodules and coarse particles present in the soil is widely practised in Madhya Pradesh and Maharashtra. In this process the raw soil is dispersed with excess water in calcination tanks. The clay is worked manually to ensure complete disintegration.

Figure 1. Process flow chart for the manufacture of bricks from red murrum soil

The lime nodules and coarse particles are then scooped out of the dispersion using baskets with holes in them. The suspension is thereafter drawn out of the tank into a settling tank through a sieve to separate any nodules left behind. When the clay settles down, the supernatant water is syphoned off. The clay is then allowed to dry to a plastic consistency It is then ready for moulding bricks. It is envisaged that this process would be carried out manually.

It is important that the firing of bricks is done in a temperature range of 780-830°C Hence, the adoption of Bull's trench kiln is recommended instead of clamps Bull's kilns are known for continuous operation and they turn out a higher percentage of first quality bricks

Scheme for the production of improved bricks