Social Redress, Sustainable Development or Both?
by Lauren Royston

South Africans currently hold land under a variety of tenure systems, including freehold and customary tenure and various other forms of tenancy. Until recently, black South Africans were prohibited from registering ownership rights, and were subject to arbitrary removal and relocation. While racially-based laws have been removed, many people still face tenure insecurity.

The Development of “Bantustans”

South Africa has a long history of territorial segregation and tenure inequality. A policy on native locations and limitations on access to residential rights was firmly established as early as 1910. By the late 1950s and 1960s urban population resettlement was a cornerstone of the apartheid strategy to reduce the size of the urban African population.

The implementation of the apartheid vision saw urban inhabitants “superfluous” to white needs resettled to ethnically defined “homelands” (reserves or bantustans), the development of industries on the borders of bantustans and the denial of urban residential rights. It was from this time that millions of people were evicted from their homes within the urban areas. Freehold settlements such as Sophiatown, Lady Selbourne, Marabastad, District Six and Cato Manor were destroyed to force black residents to move to formal townships on the periphery of the “white” cities and towns. Many hundreds and thousands of black people were evicted from urban areas altogether and removed to bantustans - small areas of mainly rural land set aside for the black population.

This is the context within which today’s urban policies in South Africa are embedded. This is the history of injustice which they seek to redress. The apartheid legacy is compounded by severe material, economic constraints which continue to limit the access of South Africa’s poor to the benefits of urban life.

Since the first democratic elections in 1994, a host of new national laws and policies have been enacted and developed. Urban development in South Africa is led by the housing sector. The national housing capital subsidy scheme is arguably the most important instrument for urban tenure reform. It is within the policies emanating from both the Departments of Housing and of Land Affairs that national policy guidelines for urban tenure security are to be found.

The Housing White Paper claims that security of tenure is a cornerstone of the Government’s approach towards providing housing to people in need. The Subsidy policy has been designed to accommodate a variety of tenure options on the basis of a limited state contribution to be driven by private (individual) investment, credit finance and where possible the sweat equity of the owner. South Africa’s land policy advocates that people should choose the tenure system which is appropriate to their circumstances and the land reform programme aims to extend greater tenure security to South Africans under diverse systems of tenure. 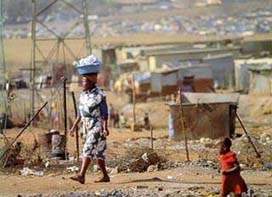 A squatter camp on the edge of Soweto, South Africa. - © UNDP/Stephenie Hollyman

In practice however, both the land reform programme and the housing subsidy scheme paint a slightly different picture. The housing subsidy scheme delivers mainly individual ownership. Officials generally display a resistant attitude to alternative forms, frequently motivated on the grounds that beneficiaries prefer individual ownership and that they are resistant to any alternatives.

To date, implementation of the land reform programme is mainly rural in focus, although there are large numbers of former homeland towns in which land rights are unclear, overlapping and at times conflicting. In fact, it is the provinces which are driving one of the major urban tenure reform initiatives in South Africa - a process of large scale privatization of public rental stock in terms of which units are being transferred to occupants. The demand for transfer to ownership is almost universal due to the historic denial of ownership. Nevertheless, this programme has raised the need for alternative forms of tenure, such as family title, due to the difficulty of establishing clear entitlement, as a result of innumerable informal changes in tenancy and a variety of occupancy patterns resulting from overcrowding, including the occupation by more than one family of a single unit.

Land tenure reform is intended to establish legally enforceable rights to land and to build a unified non-racial system of land rights. Legal rationalisation is faced with the enormous challenge of an inherited maze of laws. As a result, a variety of land rights exist which are interpreted differently according to different pieces of legislation, varying from freehold to leasehold rights, Deeds of Grant and Permission to Occupy rights. By way of illustration, the nature of the rights conferred in terms of deeds of grant, and the registration procedures administering the rights, vary according to the range of laws conferring such rights, and according to specific geographic contexts. Another example is that permits to occupy are no longer issued, but the rights conferred in terms of the permission to occupy certificates are still in existence.

The land reform policy establishes that tenure reform must accommodate de facto vested rights. The process of establishing and consolidating the homelands and informal settlement development has generally resulted in a de facto situation of overcrowding and overlapping of land rights. Recording systems have been accused of being inaccessible and have frequently failed to keep up with the dynamic processes of urbanization and settlement, leading to uncertainty about the current rights holders. In certain instances records were destroyed through political protest action.

In informal, unregistered settlements, no formal means exists for identifying either the rights holder or of defining what the holder is entitled to. Attempts to secure tenure based on the de jure situation are sure to lead to conflict or to fail. Ascertaining the de facto condition requires, on the other hand, local level investigations, facilitation and in all likelihood, dispute resolution. Accommodating de facto rights is bound, in many cases, to require the provision of alternative land. In situ tenure reform initiatives should be linked with the development of new land, not only to accommodate de-densification and non-residential uses, but also to provide choice to beneficiaries. Beneficiary choice is required if households are not to be condemned again to peripheral locations. Such an approach could possibly challenge apartheid spatial form and offer the chance of more sustainable types of development.