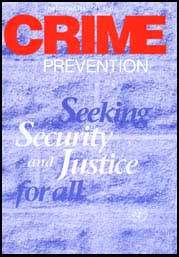 Introduction: Seeking security and justice for all

The United Nations crime-fighting directorate was elevated in 1992 to the level of an intergovernmental Commission on Crime Prevention and Criminal Justice, at the request of the General Assembly and under the mandate of the Economic and Social Council (ECOSOC). The move reflects the seriousness with which the prevention of crime and the strengthening of criminal justice systems are regarded at the international level.

Domestic crime threatens the safety of citizens around the world and degrades once-proud centres of culture and commerce. In the international arena, organized crime syndicates as a group take in an estimated $1000 billion a year, and can outgun many national Governments and outbid them for the allegiance of public officials. Whether caused by bands of street toughs or sophisticated international organizations, crime poses a clear and present danger to harmonious and sustainable development. It misdirects economic activity, undercuts democracy and social solidarity and threatens the security of individuals and families.

Never has effective international cooperation against crime been so badly needed. Liberalization and globalization of markets and finances - combined with advanced technology applied to transport, communication and transfer of monies - are opening doors to transnational crime as well as to legitimate economic activity. Recent financial and currency crises indicate that the activities of what United Nations Secretary-General Boutros Boutros-Ghali terms "crime multinationals" are restricting the beneficial effects of the new global economy while exacerbating its de-stabilizing and predatory aspects. Traffic in addictive narcotics continues to expand, despite the best efforts of individual nations to seal off their borders or repress local production; formerly insular syndicates based in Europe, Asia, Africa and the Americas are entering into joint ventures; and ominous links between terrorist and crime groupings have come to light. Attempts to deal with the difficult issue of immigration policy are further confounded by cross-border traffic in illegal migrants. Reckless environmental destruction spans national borders and territorial waters with increasing frequency and has taken such alarming forms that it is now recognized as a crime against the world itself.

In addition to forging international cooperation, the United Nations helps countries bolster domestic criminal justice systems and learn from each other's experience. Agreements reached at the Commission on Crime Prevention and Criminal Justice and at UN Crime Congresses set standards for humanitarian, fair and efficient criminal justice systems, while technical assistance from the United Nations has helped scores of countries improve the functioning of courts, police and correctional institutions. The work of the UN's criminal justice programme and the application of guidelines and standards have been especially crucial in El Salvador, Cambodia, Palestine and Haiti, which in recent years have faced the urgent need to rapidly build or reform criminal justice systems from the ground up.

Crime prevention and criminal justice issues have been a concern of the United Nations since its early days. In 1950, the Organization assumed global responsibility in the field by taking over the functions of the International Penal and Penitentiary Commission (IPPC), an intergovernmental organization established in the nineteenth century. Many changes have taken place in the crime prevention system since 1950, but the Commission and its secretariat, the Crime Prevention and Criminal Justice Division, continue to be enjoined by the United Nations Charter to promote "international cooperation in solving international problems of an economic, social, cultural or humanitarian character" and by the United Nations Declaration of Human Rights to support the "right to life, liberty and security of person" for all.

The present publication contains an overview of this important area of work of the United Nations. Following the main text is a compendium of criminal justice guidelines and standards, published in abbreviated form. Full texts, and more information about technical assistance programmes, may be obtained from: