Ten Malin Basti (Slum) areas have been selected under the UNCHS Programme in Lucknow city. The concept of convergence of activities under various schemes detailed earlier in section 2 was applied to the work begun in these areas. Out of these, it was decided to focus attention on five slums to ensure coverage and accomplishment of a wide variety of activities. The chosen slums were:

The strategy adopted as per the recommendations of this Workshop were as follows :

· Preparation of maps for the identified slum areas.

· Pooling of resources of different departments and institutions to provide facilities in slums areas more effectively.

· Surveys were conducted throughout Lucknow which established that there were 639 slums in the city. These contained 114,210 households and a population of 685,260.

· The household surveys in the 10 selected slums enumerated 2765 families with a population of 14,500.

· In the five slums initially focused on under the UNCHS programme the total number of families were 795 with a population of 4000.

· These local groups/societies actively involved themselves with the civic authorities viz the SUDA/DUDA in identifying priority areas of interventions.

· Community women played a dominant and distinctive role within these community groups. In addition the work relating to pre-primary education and continuing education done in the community centres set up in each slum area, was done predominantly by the local women.

· In the field of basic infrastructure services, the work was implemented by the SUDA/DUDA. However, the communities also participated mainly by providing labour.

The details of work completed in the 5 slum areas and those ongoing under the UNCHS Programme are given in Tables 2.3, 2.4 and 2.5 respectively. 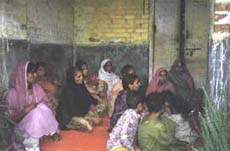 Women from a slum in central Lucknow jointly discussing for prioritising their needs.

Table 2.3 Progress Report of work completed in slums under UNCHS Scheme for the Financial Year 1998-99 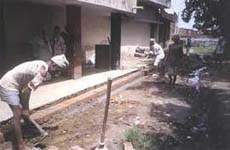 Paving of streets and lanes in progress. The labour is provided by the slum communities themselves.

Table 2.4 Progress Report of work on-going schemes in slums under UNCHS Scheme for the Financial Year 1999-2000 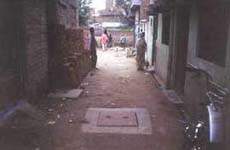 Underground sewerage facility extended to a Lucknow slum. Individual toilets connected to the system have improved the quality of life of slum dwellers and created a better environment. 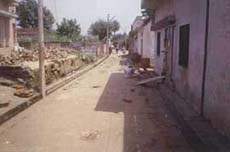 Completion of street paving and stormwater drainage work has vastly improved access and the overall look of slums in the city.

The following activities have been identified for completion upto the end of the UNCHS programme period. The total cost involved has been determined as Rs. 1,295,000 as per the details given:

3. Support for upgradation of marketing skill amongst women entrepreneurs.

1. Selection of at least 2 women from each project basti to be trained as Handpump Mechanics (HPMs).

2. 6 days training of the selected women as HPMs.

4. Provide tools to the trained HPMs.

B. Training of FLE/RCH Resource Persons

1. Selection of 2 women from each project basti.

3. Conducting one day basti level camps in each basti.

4. Development of resource material for community based resource centre.

1. Selection of 2 women from each project basti.

1. Two days orientation of community women on need of Thrift & Credit Societies in each project basti.

2. Selection of executives of all the groups on each basti.

3. Five days training of all the executives.

4. Maintaining of groups formed in each basti.

Keeping in view the basic concept of the UNCHS programme which seeks to converge the activities under a number of ongoing central and state programmes, the city of Lucknow has worked out an investment plan for further improvement in the physical facilities in slum areas and the quality of life of the slum dwellers. This plan has been stratified into several components which include:-

The details are given in Table 2.6.