The city has three distinct entities - the older habitations near the port areas, the subsequently developed areas and the peripheral settlements at and beyond the municipal boundary. Some settlements have also developed organically on the slopes of the various hillocks, which dominate the city skyline.

Owing to the shortage in the housing stock and the migration of low-income people to the city, the incidence of slum growth has been prolific. The slum population of Visakhapatnam is estimated to have risen from 112,000 in 1976 to 237/000 at present. Part of the rise is no doubt attributable to a higher birth rate but the larger part of rise is due to immigration. The immigration rate in slums is about twice that of the city as a whole.

The Urban Community Development (UCD) Department had conducted a detailed census survey of all the slums of the city of Visakhapatnam during 1985-86. As per the survey, there were 170 slums in the city with 36,658 households and a population of 119,000 at that time.

The Municipal Corporation of Visakhapatnam constituted the UCD Department in 1979 basing on the experiences gained from other projects i.e. UCD, Hyderabad. The UCD, Visakhapatnam, which initially covered a population of 45000 with its own funds, was extended to the entire city during the year 1982 with the financial assistance of UNICEF. The project had a total value of Rs. 0.49 million for period of three years with the following objectives:

a. To ensure convergence of activities of the ICDS and UCD to maximize the coverage and to improve the quality of services rendered.

b. To extend basic services, in a phased manner, to the urban poor in the city particularly to children and women.

c. To encourage community participation in the planning, provision and maintenance of these services.

d. To enhance the planning and implementation capacity of the implementing bodies, particularly the MCV, to provide basic services to the children and women of the urban poor.

e. To encourage and promote the convergence of services to the same beneficiaries by timely and effective coordination with the sectoral departments, such as, Health, Education, PHED, Women and Child Welfare, etc.

Based on the above objectives and experiences gained a massive integrated slum improvement programme was designed with a total cost of Rs. 250 million during the year 1986. The Overseas Development Administration (ODA), Government of United Kingdom came forward to grant the entire programme with the following revised objectives:

i. Increase the supply of serviced land in the selected slums so as to provide more opportunities for affordable low-income shelter.

v. Provide low cost sanitation as far as possible to all the families living in slums and gradually eliminate community latrines. It was proposed to provide loan facilities for construction of low-cost, pour-flush latrines with on-the-spot disposal system

vii. Develop community participation and cohesiveness in sustaining the infrastructure created through both physical and socio-economic programmes. Train the population, more particularly women and youth, in proper use and maintenance of this infrastructure.

viii. Take steps to increase community awareness to have a better understanding of the problems faced by slum dwellers and develop a problem solving approach with indigenous initiative organisation , self-help and mutual aid.

ix. Develop local initiatives through educative programmes, identify and train local leaders who will act as 'contact' persons in the community.

x. Converge all the services as far as possible rendered by the State Government departments, Municipal Corporation, voluntary and non-governmental organisations.

xi. Provide technical assistance for improving the capacity of the implementing bodies particularly the Municipal Corporation in respect of planning, implementation and administration of various projects and programmes with adequate emphasis on monitoring review and evaluation techniques.

Role of UCDD in Slum Improvement

The first project undertaken by the UCDD in Visakhapatnam was the Environmental Improvement Scheme in slums (physical amenities at a cost of Rs. 13.2 million during 1979-81). Under this scheme, a land plot (either in the existing slum or at a new location) was provided to a slum household free of cost by the Municipality. The environmental services (water, sewerage, drains, roads, etc.) were also provided free of cost. Loans for construction of the houses were secured from commercial banks or Housing and Urban Development Corporation (HUDCO). People built their own houses costing Rs. 12,000 each. As many as 18,000 houses were constructed upto 1990-91 in the slums.

The Slum Improvement Projects implemented since 1988 were in many ways a remarkable effort. In different schemes, different solutions were attempted. In the Weaker Sections Housing Programme, four types of schemes were implemented simultaneously: (i) new houses on new sites, (ii) new houses in existing slum pockets, (iii) two or three storeyed houses in existing slums and (iv) shelter improvement.

The most difficult and challenging task for the UCDD was implementation of health and socio-economic development programmes. Without active participation of the people especially women, these programmes could not have been implemented successfully. The social development staff, mainly the Community Organizers and Social Workers took the responsibility of forming the Neighbourhood Committees (NHCs) one in each slum comprising mostly women members. The NHC was given the responsibility of monitoring the working of Balwadies, Anganwadies, Sewing Centres, etc. which started in each slum under the Visakhapatnam Slum Improvement Project. 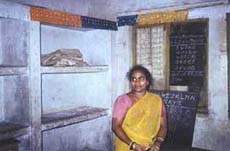 A Balwadi worker from a Visakhapatnam slum. She also helps in other activities conducted at the community centre.

Neighbourhood Committees (NHCs) have been formed within each slum in Visakhapatnam. They are representative of all the families residing therein and are composed of both men and women. Some NHCs comprise of only women. After registration, the NHCs obtained the cooperation of locally available community based organisations with the CDS staff in a motivating and facilitating role.

Once established with its bank account opened, funds flowed from the programme implementing authority, the UCD, to the NHC for organising programmes like Mother Leaders Training, Food and Nutrition Training, Clean Hut Competitions, Solid Waste Collection and Street Sweeping Exercises, payment of honorariums to voluntary workers like Balwadi Instructors, Ayahs, Adult and Non-formal Education Instructors and Sewing Instructors etc. on reimbursement basis from project funds. The MCV entered into an agreement with the NHCs for proper implementation and sustenance of the programme. The agreement defined the roles and responsibilities of each party.

Today there are 251 identified slums in the city with a total population of 2,37,437. The total number of households is 51,855. The broad slum profile of the city is given below in Table 4.2.

(Figures in brackets are percentages)