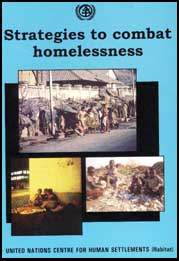 It is evident that the circumstances that lead individuals and households into homelessness are increasingly prevalent world-wide and there is no easing in the task of re-integrating homeless people into mainstream society. In high-income industrial countries, the poverty and isolation of homeless people are at odds with the wealth and prosperity of society as a whole. In developing countries, rapid urbanisation, the urbanisation of poverty, structural adjustment programmes, some disintegration of traditional family links, poor life chances in rural areas, and many other stresses, are compounding to introduce homelessness for the first time, particularly among young people.

The rights-based approach to housing highlights the need to tackle homelessness. Not to do so would be a direct denial of basic human rights and contrary to many obligations accepted by states through their ratification of many international legal instruments as well as the GSS, Agenda 21, and the Habitat Agenda.

Unfortunately, the definition of homelessness is by no means straightforward and it can be categorised by many different aspects such as the problems homeless people are experiencing, the attitude of the people involved, and their potential. Furthermore, it is helpful to visualise a continuum as well as discrete categories.

This report argues that, when dealing with high-income industrial countries, it is inappropriate to include only those included in a narrow definition of homelessness. Those who are potentially, imminently, latently, or incipiently homeless through poor tenure security, unsupportive family circumstances, or poor physical conditions and lack of servicing, should also be included. Thus, a broader definition of homelessness is required in these countries.

In developing countries, however, the inclusion of poor tenure or housing conditions in the definition would be inappropriate. Such very large proportions of the population routinely endure them that they do not generate that detachment from society nor represent the 'unique distress and urgent need' (FEANTSA, 1999) facing those with much-below-average housing security and/or quality of shelter for their society. Where the threshold comes must probably be decided in the context of each country or region. Most would probably include people living on streets (even with rudimentary shelter and a home life constructed there), those under bridges, on railway lines, in discarded pipes, etc. Whether they would include those in the poorer types of squatter shelters, or those living on land liable to flooding, land-slip, and other hazards (and at what level of hazard) should be dealt with nationally or regionally.

This removal of generally poor housing from the definition of homeless-ness is reasonable in this report, as it is the focus of most of the routine work of UNCHS (Habitat). The separation of acute lack of housing from that which may be routine seems sensible. This reduces the constituency addressed in this report from about half of humankind to somewhere above 100 million people.

Data on numbers and characteristics of homeless people varies greatly between and within regions, often depending on whether there are services to cater for them in any way. This gives rise to the service-statistics-paradox in which the countries that try hardest to provide services seem to have the highest levels of homelessness. Homeless people are universally characterised by poverty. Some live within household groups others live alone; women are a minority (at least in industrial countries) - although the number of homeless women may be underestimated due to the prevalence of concealed homeless-ness among women - and an increasing proportion are young. Many homeless people have chemical dependencies and problems with alcohol. They are more likely to have mental illness and some physical ailments, such as sexually transmitted diseases, than the population at large. The reduction in hospitalisation of people with these problems is thought to have exacerbated the homelessness problem. Ethnic minorities and migrants seem to be over-represented in the homeless population.

Some of the above characteristics are felt to be causal factors in people becoming homeless. However, many systemic issues have almost certainly boosted the homeless population. These include a declining housing provision, cuts in social welfare systems, the breakdown of families, increasingly uncertain employment markets and increases in extreme poverty. There are also events that lead directly to homelessness, especially evictions from rental property or foreclosure of owned, forced eviction of whole neighbourhoods, and natural or human-made disasters. It is argued that it is more helpful to tackle the systemic issues rather than focusing on the individuals' shortcomings as this latter tends to lead to unhelpful (and almost certainly inaccurate) dichotomies such as deserving versus undeserving.

There is a large number of children and young people, in many countries, who are classified together as street children but seem to be very varied in their characteristics and behaviour. To the major distinction between children in the street and children of the street, can be added children of street families and those who are completely abandoned by the adult world. The first and third tend to have contact with adult relatives and may sleep with their families. On the other hand, children of the street and those who have been abandoned make their life and relationships entirely in the public realm. While the causes may be social in high-income industrial countries, especially with respect to violence and abuse in the home, poverty tends to be the driving force in developing countries. Many street children regard their state as temporary and look forward to fitting back into mainstream society and getting a job.

Current initiatives in dealing with homelessness are moving away from the dichotomous deserving/undeserving, housed/homeless, structural/agency, approaches to responses that recognise the differing needs of people in different places on the home to homeless continuum. There is a need to recognise that conventional housing strategies may not touch the problem of homelessness. This may be especially relevant in developing countries where the low-income housing policies tend to be based on sites and services and other self-help approaches to building single household dwellings.

Interventions for and with homeless people range from ensuring their day-to-day survival through shelters, through the provision of social services to tackle their personal needs, to providing supportive housing. The last has provided many opportunities for employment for homeless people along the way. Initiatives such as street papers, and the use of information technology to increase efficiency in finding shelter places, demonstrate the breadth of interventions underway. Emergency and longer-term shelters have an on-going role in establishing a point of contact with most homeless people and a place from where other interventions can operate. They will probably continue to be the point of entry into the realm of helping homeless people as such interventions start up in developing countries.

Interventions aimed at street children vary from clandestine murder to appropriate skills training. It is very important to prevent children's coming on to the street in the first place by improving the lifechances of poor households, especially women. In addition, realistic portrayals of life on the streets in the media are likely to reduce its attractiveness viz a viz the home. As with work among homeless adults, it is important that agencies collaborate and ensure that they are not taking with one hand while giving with the other through incompatible policies. It is important that outreach and other interventions are street-friendly, especially in education aimed at gathering skills and preventing HIV/AIDS infection.

The end of the twentieth century was a time when Governments withdrew from large-scale provision of subsidised public housing and from public services in general. As housing is increasingly seen as a private good, public intervention is becoming limited to specially targeted cases. The context of enablement propounded in the GSS and Habitat Agenda has set policy contexts within which countries should operate but many have so far failed to replace their narrow subsidised public housing efforts with effective wide-ranging enablement strategies. Following the general failure of traditional policies to move people from homelessness into permanent housing, self-sufficiency and independent living, new approaches are needed. One of the most important of these has been strengthening inter-agency partnerships. It is recognised that homeless people need emergency assistance to bring them back into mainstream society and an appropriate housing and social infrastructure to prevent their falling into the state of homelessness. This can be conceived as a two-pronged attack or, perhaps more helpfully, a 'continuum of care'. Stages on the continuum typically involve emergency palliative treatment, transitional rehabilitation, and permanent housing with support services.

At the same time, there seems to be a shift in service delivery towards a more individual oriented approach aiming at reintegration and active participation of homeless individuals. There appears, however, to be a potential conflict between the ideas of partnership and consensus among professional service providers, on the one hand, and the idea of individually targeted and tailored services, on the other. In the 'staircase system', developed in some Western European countries, it is demonstrated that shared problem definitions and integrated courses of action (housing and support) may be, but are not always, profitable from the perspective of homeless individuals. Neither do operational responses work effectively yet in accordance with the empowerment and reintegration philosophy embraced in national and international policy declarations (FEANTSA, 1999).